On Thursday we opened up a fan poll for the Inside Survivor readers to vote for their player of the week for Episode 12 of Survivor: Kaôh Rōng – Brains vs. Beauty vs. Brawn. The winner of that poll and Player of the Week is… 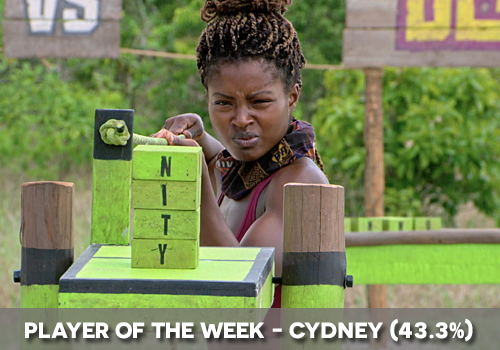 Cydney won her second Player of the Week poll of the season after yet another impressive performance. Not only did her slow and steady approach to the immunity challenge lead to a well-earned victory, but she once again controlled the vote. One of the key decision makers in the majority alliance, Cydney thought it would be more beneficial to her game to keep Michele over her former Brawn ally Jason. After Tai had set his sights on Michele, Cydney made it clear to her allies that she didn’t like Tai’s approach. She proceeded to have one on one conversations with Aubry, Joe, and Michele to make sure the target remained on Jason. At tribal council, the vote went just as Cydney planned.

Cydney has named the target of every post-merge vote, either on her own, or in tandem with Aubry, and her immunity win and control over the vote this episode has earned her another Player of the Week title.