Yesterday we opened up a fan poll for the Inside Survivor readers to vote on their player of the week for Episode 4 of Survivor: Kaôh Rōng – Brains vs Beauty vs Brawn. The winner of that poll and Player of the Week is… 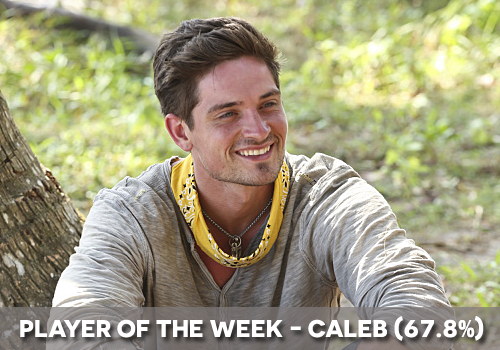 Caleb might have exited the game this week due to a tragic medical evacuation but he’s gained his second Player of the Week of the season. Throughout the first four episodes, Caleb has given 100% effort in both camp life and challenges and even struggled through the heat and exhaustion to help the Beauty tribe win the reward challenge this week. Immediately after Caleb completed the challenge he collapsed and was in and out of consciousness. The medical team deemed him unfit to continue and he had to be airlifted to a nearby hospital.

He has shown a solid social game, a strong worth ethic and a challenge dominance. That has earned Caleb his second Player of the Week.