Yesterday we opened up a fan poll for the Inside Survivor readers to vote on their player of the week for Episode 3 of Survivor: Kaôh Rōng – Brains vs. Beauty vs. Brawn. The winner of that poll and Player of the Week is… 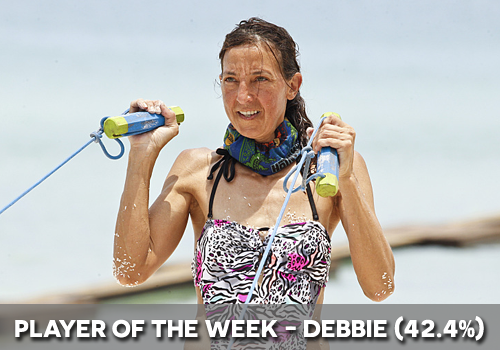 Debbie, the chemist from Reading, Pennsylvania, has certainly made a big splash in the first three episodes of Survivor: Kaôh Rōng. The first two weeks it was easy to write her off as Coach/Phillip style novelty act that was there simply for the editors to have fun with. But this week Debbie proved to be more than meets the eye, as a shrewd player emerged from beneath the goofy exterior. She was shown to have a good read on the tribe dynamics, recognizing that Liz and Peter wanted to use her for their own benefit. While Debbie could have certainly laid back and allowed them to “carry” her through the game, she instead stepped up to take control. Already tightly aligned with fellow older tribemate Joe, she used her connection with Aubry to align herself and Joe with the Aubry/Neal tandem. This gave Debbie a majority and allowed her and her alliance to dictate the vote.

Two weeks ago it seemed like the older pair were on the outs, but now Debbie has put herself in a very strong position going forward, and that has earned her Player of the Week.