Yesterday we opened up a fan poll for the Inside Survivor readers to vote on their player of the week for Episode 2 of Survivor: Kaôh Rōng – Brains vs. Beauty vs. Brawn. The winner of that poll and Player of the Week is… 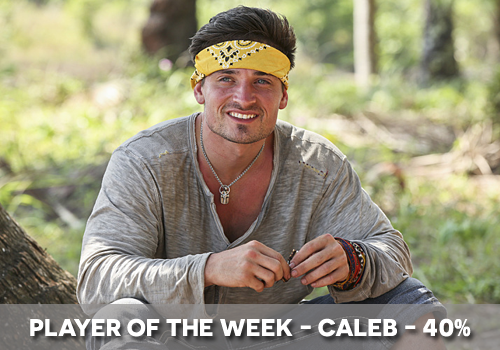 Caleb, the former Big Brother contestant from Hopkinsville, KY, has quickly developed strong bonds on the Beauty tribe which is a testament to his social game. He’s formed a close relationship with Tai which has allowed his fellow tribemates to see a lighter side of Caleb that they might not have been familiar with had they only known him from Big Brother. He has also been a strong challenge performer, leading his tribe to victory in this week’s immunity challenge. We haven’t seen a lot of strategy from the Beauty tribe, so it’s hard to say where exactly Caleb falls in the pecking order but we did see in Episode 1 the three girls discussing how loyal he is.

Right now, Caleb looks to be in a solid position on a strong, laidback tribe and that has earned him Player of the Week.