On Friday we opened up a fan poll for the Inside Survivor readers to vote on their player of the week for Episode 8 of Survivor: Kaôh Rōng – Brains vs. Beauty vs. Brawn. The winner of that poll and Player of the Week is… 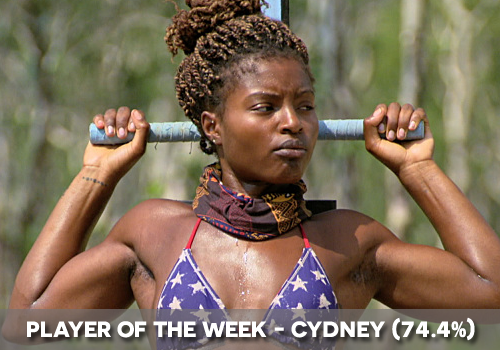 Cydney has played the majority of the game so far with a go-with-the-flow attitude. She has formed solid relationships and managed to keep the target off her back. In Episode 8 she saw the opportunity to strike and take the game into her own hands. After becoming irritated with Nick constantly checking in on the girls, Cydney decided that the men had too much power and needed taking down a peg or two. She quickly went to work on scooping up numbers by approaching the other females of the tribe – first Aubry and Debbie, and then Julia and Michele. By using the outsiders to form a new majority, Cydney took control of the vote and sent Nick packing.

Cydney stepped into the spotlight and put herself in the power position by dictating the vote and blindsiding Nick and that has earned her Player of the Week.