Yesterday we opened up a fan poll for the Inside Survivor readers to vote on their player of the week for Episode 5 of Survivor: Kaôh Rōng – Brains vs Beauty vs Brawn. The winner of that poll and Player of the Week is… 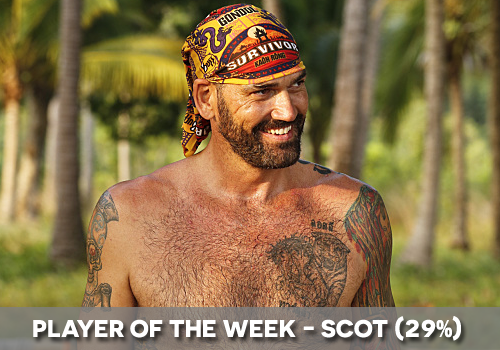 Scot hasn’t had the best start to the season being part of the disastrous Brawn tribe and losing one of his closest allies, Jennifer, at the second tribal council. But this week he had a stand-out episode that showed not only his strength in challenges but some game savviness. After the tribe swap he ended up as the lone Brawn member on a tribe made up of three Brains and two Beauties. He quickly bonded with Tai while also getting in comfortable with the former Brains. His best moment came when Tai revealed his hidden idol in a potential plan to blindside Peter. Scot, now knowing the whereabouts of two idols, convinced Tai to keep his idol and vote out Anna. If Scot can make it to the merge with both Tai and Jason it puts him in a very strong position.

Scot showed some very smart gamesmanship this episode and that has earned him Player of the Week.