Yesterday we opened up a fan poll for the Inside Survivor readers to vote on their player of the week for Episode 6 of Survivor: Kaôh Rōng – Brains vs. Beauty vs. Brawn. The winner of that poll and Player of the Week is… 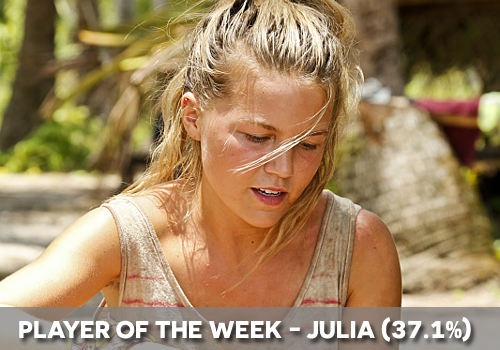 Julia was in a tough spot having been exiled last week at the tribe swap. Returning to the Gondol beach where her ally Anna had been voted out at the previous tribal council, it put her in a precarious position in the game. Despite having a conversation with Peter, who seemed open to working with her, the Brains ultimately decided they were going to stick together. With the target on Julia, she quickly snapped into action and used her knowledge of Peter’s scheming against him by informing Aubry of his underhanded tactics. She also bonded with Scot and Tai and together they aimed their votes at Peter. Aubry eventually decided to switch her vote from Julia to Peter.

By remaining optimistic and using her game knowledge, Julia managed to save herself and that has earned her Player of the Week.