On Thursday we opened up a fan poll for the Inside Survivor readers to vote for their player of the week for Episode 9 of Survivor: Kaôh Rōng – Brains vs. Beauty vs. Brawn. The winner of that poll and Player of the Week is… 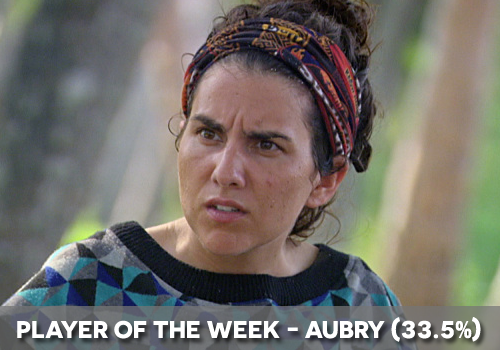 Aubry has had a game of ups and downs, but when it comes to tribal council, she is always on the right side of the vote. She has now formed a powerful partnership with Cydney, and the two of them controlled the vote this week. Regardless of whether taking out Debbie was a wise move in the long run (we won’t know until the following episodes), the immediate result meant that Aubry, and her new closest ally Cydney, were safe from the vote. Had they voted for Jason, Scot or Tai there was high potential they could have been idoled out. Aubry has good reads on people. She recognized that Julia was double-dealing and the episode verified that.

Aubry continues to be on the right side of the vote and is increasing in power week by week, and that has earned her Player of the Week.