On Thursday we opened up a fan poll for the Inside Survivor readers to vote for their player of the week for Episode 11 of Survivor: Kaôh Rōng – Brains vs. Beauty vs. Brawn. The winner of that poll and Player of the Week is… 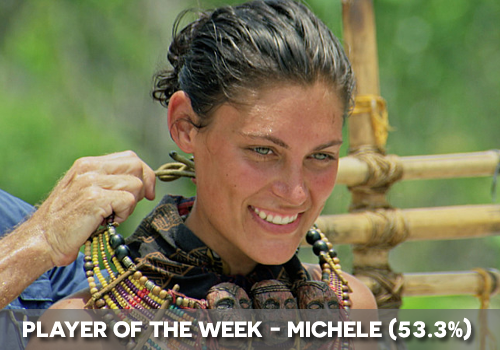 Michele had her breakout episode this week, and it has brought her her first Player of the Week title of the season. After being on the wrong side of the vote at the previous tribal council, Michele had to work her way back into the majority. She used her strong social connections to prove herself trustworthy to both Aubry and Cydney – her choice to bring Aubry on the reward was a very smart decision and she worked it to her benefit. Not only that but her willingness to cut Julia to advance herself showed just how much focus Michele has on her game. There has been a lot of talk on and off-screen from players thinking that they controlled Michele, yet Michele has voted those players out of the game. Making people believe they control you is a very valid strategy and one that Michele has used to great effect throughout the season, whether people recognize it or not. On top of that, her number memorizing challenge win this week was very impressive.

Michele continues to use her social game to get ahead, and that coupled with a strong immunity challenge win has earned her Player of the Week.