On Thursday we opened up a fan poll for the Inside Survivor readers to vote for their player of the week for Episode 10 of Survivor: Kaôh Rōng – Brains vs. Beauty vs. Brawn. The winner of that poll and Player of the Week is… 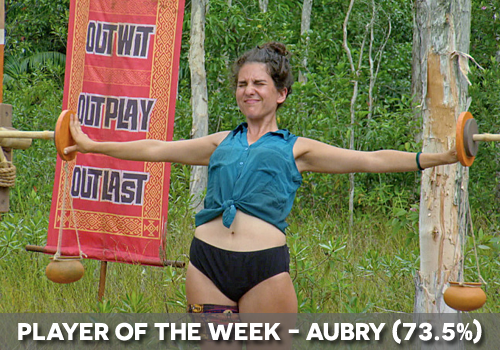 In the words of Drake, Aubry is the first player this season to win player of the week “back to back”. After voting out her ally Debbie last week, in a move that assured Aubry and Cydney’s safety, this episode she had to overcome a three-man alliance with a Super Idol. Not only that but Tai also won advantage (an extra vote), and Jason won immunity. The odds were stacked against the girls (plus Joe) alliance on paper, but after some masterful social maneuvering, and an open talk with Tai, Aubry was able to lure him away from Jason and Scot. She convinced him to vote against one of his own allies. In doing so, Tai refused to use his idol to protect Scot, resulting in Scot leaving with Jason’s idol in his pocket. While Tai was needed to execute the move, not enough can be said for how well Aubry put the pieces together. Against a Super Idol, an extra vote, and an immunity necklace, Aubry managed to engineer a blindside that took out one of the enemy’s numbers, one of their idols, killed the Super Idol, and formed a new majority with Tai, Cydney, and Joe. She also kicked ass in the challenges and earned the respect of her fellow tribe-mates.

Aubry has been in the know at every tribal council she has attended and put on her most masterful performance yet in Episode 10, and that has earned her Player of the Week.