In four of the past five seasons of Survivor, a woman over the age of 40 has made it to the Final Tribal Council. Do you know the combined total of jury votes these five women received?

Not three each. Three in total. Shocking, right? Four of the five lost to a man and in the case of the one that lost to a woman it was an all-female Final 3. In each case, these women were maligned and criticized for the way they played the game.

In September, CBS will air Survivor: Cambodia – Second Chance, and this season features two women over 40, Kass McQuillen and Kimmi Kappenberg, and three women in their late 30s, Kelly Wiglesworth, Peih-Gee Law, and Tasha Fox. How these women fair in an all returnee season will be very interesting to watch; especially in the case of Kass and Kimmi. Will they be able to continue the pattern of the over 40 woman reaching the Final Tribal Council? And if so, can they break the trend and succeed against their final competition?

Newest Inside Survivor contributor Josh Forward takes a deeper look at the treatment of the over 40 women in Survivor.

Survivor Women: Treatment of the Over 40s
by Josh Forward

As has often been repeated, Survivor is a social experiment. A pressure-cooker microcosm of society. So it’s not surprising that this situation fosters an environment where certain archetypes are assigned to the competitors, not just by CBS casting, but by the castaways themselves. One of the most common tropes is the role of the tribe “mom.” An older woman who cares for the tribe, is a shoulder to cry on but is generally speaking, not allowed to play a devious game.

Older women have always been given the rough end of the stick on Survivor; often early boots, their games are dismissed or are criticised for not obeying the rules that their allocated “mom” status pertains. Like society, it’s safe to say that sexism in combination with ageism put these contestants at a disadvantage.

Let’s crunch the numbers. The overall average age of Survivor contestants on Day 1, across all seasons, is 33.54. The youngest season average is Survivor: China with 30, and the oldest is Survivor: Nicaragua with 37.5 (even narrowly beating upcoming Survivor: Cambodia). The variation isn’t enormously different across most seasons. However, when we split the men and the women, in only seven seasons is the average age of women higher than that of men, and only slightly.

However, men can be on average six years older than the women in some seasons. By individual numbers, across all seasons, the total number of males over 40 is 76, and the total number of females over 40 is only 60. That’s an average of less than two per season. Older women are a perpetual minority in the game of Survivor. Without similarly aged tribemates in their gender, they must integrate themselves with younger tribemates, and in turn, their age and “mom” factor is only exaggerated. And Lord knows how much some people need their mother (just ask Rodney).

A surprising figure is that female contestants over 40 last longer in the game. Averaging at 9.25th place compared to their male counterparts at 10.36th place. It’s not a huge margin but is surprising considering the emphasis the show often puts on older, all American men. However, the main difference is how the placings are spread. The older men traditionally have no patterns to their placing; ranging from first boots to winners and evenly spread in between. The older women, however, tend to fall predominantly into two categories; either being one of the first three boots or making it to Final Tribal Council. 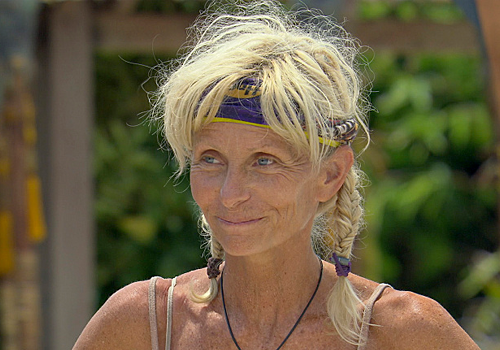 On the other side there is Sonja Christopher, Debb Eaton, Maralyn Hershey, Patricia Jackson, Janet Koth, Tina Wesson 2.0, Wanda Shirk, Tina Scheer, Gillian Larson, Betsy Bolan, Wendy DeSmidt-Kohlhoff, Kristina Kell, Stacey Powell, Nina Acosta, and Nina Poersch who all were one of the first three booted. Almost 50% of female castaways over 40 were either very early boots or made it to the very end. Only Denise Stapley has managed to convert that Final Tribal placing into a million dollar cheque – and notably only against another woman over 40 and another man over 40.

It’s important to note here that Tina Wesson was actually 39 when she won Survivor: The Australian Outback, so she just misses this age bracket, and arguably won for appearing to adhere to her caring, lovely motherly role to the tribe; a role that has since been blacklisted from Final Tribals. In fact, these types are now likely to be voted out in fear of a Wesson style win. Crucially, the Survivor game has changed from the experience of Survivor where Colby took “worthy” Tina to the end of the game, to the game of Survivor where everyone on Survivor: Blood vs. Water voted out Tina the “threat” twice.

For the vast majority of these early boot women, the reason is simply they are too “weak” at a time where the tribe needs to win Immunity. The ones who make it to the end are either publicly perceived as “goats”, or have successfully managed to manoeuvre their way with strong game-play, but are criticised by the jury for not adhering to their tasked maternal nature. Recent seasons, in particular, have featured strong older women reaching Final Tribal. 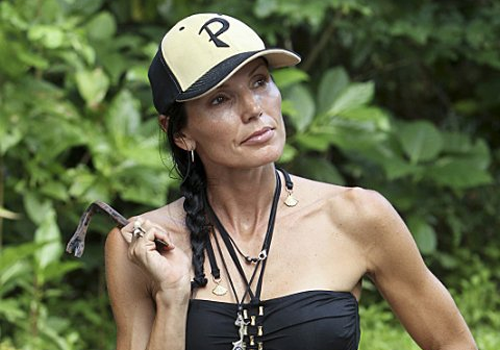 Neat lady Monica Culpepper is an excellent example of how great game-play gets maligned due to her motherly role. Even beginning with Survivor: One World, she was one of the strongest competitors on her tribe, but it still wasn’t enough in a season where the average age of women was very low, and Monica was booted pre-merge.

Her comeback in Blood vs. Water was well deserved, and she proved to be a total challenge beast once again, especially when it came to individual challenges. As a side note, in Blood vs Water, the three competitors who won the most individual challenges were Tina Wesson, Laura Morett, and Monica Culpepper – three women over 40. A reboot of Charlie’s Angels need look no further.

Monica managed to sit in a comfortable and influential spot all game. People who came after her (Kat) were sent packing at her handiwork. She changed alliances when she knew she was on the bottom, and made decisions separate to what she was told to do to enhance her own game. Come jury time, she was hammered for not being authentic, and her game and challenge beast status were dismissed.

Kim Johnson, 57 (fourth oldest female contestant ever), also managed to win the crucial final two Immunity challenges in Survivor: Africa; leaving the fate of the three big, strong men, Tom, Lex and Ethan, in her hands. She was also crucial throughout the season in solidifying her alliance’s numbers, pulling in T-Bird, and had only one vote against her the whole game, and was on the right side of the vote each Tribal Council.

Ethan is certainly regarded as a worthy winner, but Kim Johnson played a strong and worthy game. Come Final Tribal she was torn apart by the jury and lost by the largest margin in Survivor up until that point. She’s one of the first people to be labelled a coat-tail rider at Final Tribal, and for that label to work against her so much. But if you look at her track record she was anything but. She worried at the beginning that if her tribe Boran were to lose more challenges, she would be voted off for being “weak”, and perhaps she was never able to shake that mentality.

In an older lady double act, we have Dawn Meehan and Sherri Biethman in Survivor: Caramoan. Two women over 40 (the only ones that season), both making it to Final Tribal, neither receiving a single vote. Cochran played a good game, but once again it’s the brutality from the jury to Sherri and Dawn that is puzzling (granted, Sherri’s Final Tribal performance was Dan-Foley-apology level terrible).

Dawn and Cochran were in a tight alliance from Day 1 and made all strategic moves together. Come jury time; Cochran was praised while Dawn was seen as an emotional, insincere traitor. The motherly role she was assigned was not adhered to. Sherri, on the other hand, was viewed as a coat-tail rider, despite being the power player in her original tribe, and then an underdog from the tribe swap onwards, in a game dominated by returning players. She worked her way into new alliances when she had to and outlasted many strong players. Too cold or too weak. These are the way older women are perceived. 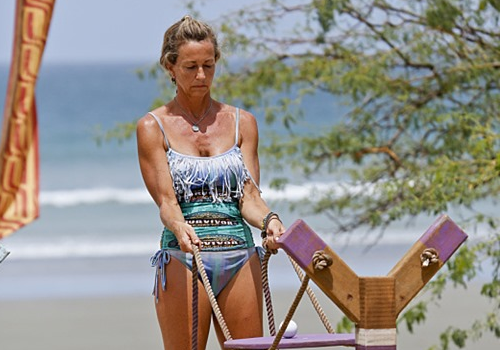 Missy Payne is another example of a fierce competitor, and is one of the most obvious “mothers” to play the game as she was playing with, and protecting, her actual daughter Baylor, in Survivor: San Juan Del Sur.

In a game where power players were targeted quickly and their torches snuffed, Missy was behind each kill shot. Josh, Jeremy and Jon were all taken out on Missy’s vote; something no one else in her Final 3 can attest too. She is part of the longest lasting loved one duo in either Blood vs. Water season. She injured her ankle and didn’t have a moment of hesitation when she demanded to stay in the game. But come Final Tribal, she was annihilated by the jury, most of all by the infamous speech from Reed calling her the “wicked step mother”. Whilst Reed was likely trying to feel the spotlight on his face, Missy became the easy target as she was criticised for not being “mom” enough for the tribe. This has been skirted around by other older women at Final Tribal, but this is the time it was said most bluntly.

What exactly is it that makes the younger members of the tribe feel that they have a right to be taken care of by an older woman, purely because of her age? Would the same criticism be applied to a man? Of course not. It’s strictly entitled behaviour based on assigned roles. The fact that Missy is attacked for granting favour to her actual daughter over other strangers is actually laughable when rephrased. Of course she didn’t treat you like she did Baylor, she’s not your mother and has no responsibility to be purely because of her age. Wash your own damn spidey suit.

There are plenty more examples where this kind of unfair treatment can be seen. Kass torn apart by her fellow castaways for playing the game autonomously, Carolyn left out in the cold by the jury despite having strategic control over the game, Malcolm blaming Lisa’s motherly instincts for finding his idol poorly hidden in his shorts left on the line, Twila, Lillian – the list goes on. There are countless examples, from throwaway comments, to jury speeches mistaken for opportunities to audition for the Bold and the Beautiful.

The stats don’t lie, given the chance, women over 40 can outwit, outlast, and outplay as well as anyone can, but just aren’t given the credit they deserve.

Josh is a writer and Survivor fanatic from Sydney, Australia.

8 responses to “Survivor Women: Treatment of the Over 40s”