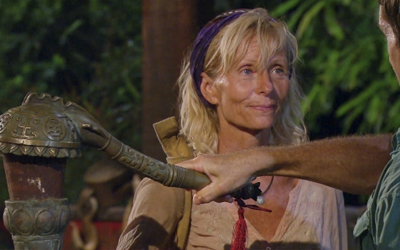 Tina Wesson’s Survivor track record is truly a special one, as she’s the only person who can claim membership to the clubs of winners, first boots, and Day 38 bootees. She narrowly avoided becoming a member of the Day 38 Club her first time around, and instead emerged victorious. Eventually, that particular bit of fate caught up to her during her third game in Survivor: Blood vs. Water. The only person in the Club that has also won the game, Tina’s third attempt at Survivor was a reminder of what made Tina so great to watch the first two times: a combination of sweet Southern charm, joyful attitude, and hyper-competitive motivation.

Still, as much fun as Tina was this season, she still has one big strike against her that sends her to the lower portion of the rankings, and that’s called Redemption Island. Tina was voted out three spots into the merge, following Aras and Vytas Baskauskas, who got duped pretty hard by Tyson Apostol and Gervase Peterson. Aras’ blindside was the first time Tina had ever been on the wrong side of the vote and survived, which she did not take kindly to and made no attempt to hide her feelings upon returning from tribal that night. Despite all the hunting for cracks in the alliance and hidden immunity idols, Tina followed the Baskauskas Brothers out of the game.

After making the transition to Redemption Island, she quickly formed a Super-Mom tag team with Laura Morett, and the two of them fought their way through the final duel of the season. While Laura was the prohibitive favorite heading into that challenge, Tina was the one who proved triumphant and won her way back into the game. Upon her return, Tina was a legit threat to win, but she ultimately proved to be one last obstacle for Tyson to overcome, as his solid alliance of Gervase and Monica Culpepper sent Tina away and out of the game for good.

Despite Tina’s relative lack of impact on the game, it was still such a blast to see her back on Survivor just for the sheer novelty of it. She began her Survivor journey way back in the Outback in 2001, and after a very brief second stint, to have the third part of that journey end with another million dollars just within in her grasp felt like a very appropriate (and probably final) chapter of her Survivor story. She got to prove that, 12 years after her first time playing, she still had some fight in her. Plus, she got to bring her daughter Katie along for the ride, who proved to be an adorable and enjoyable player in her own right. Tina’s lived a full Survivor life and has more reason than most to hold their head up high as a member of the Day 38 Club. 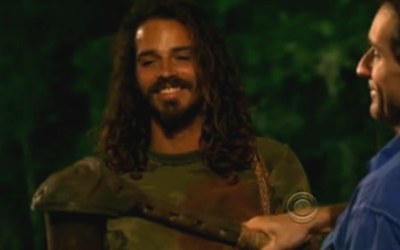 Ozzy Lusth shares a bit in common with Tina Wesson as Day 38 Club members. They’ve both played three times respectively, and they’ve both had to battle their way through Redemption Island to make it to Day 38. That’s, however, where the differences end. For Tina, who had already proven victorious before, her third time was one last (?) journey through Survivor celebrating her experience and seeing how far she could go. Ozzy, on the other hand, was still chasing that W his third time around, which caused him to play the craziest and most bold game he’s ever played.

While Ozzy 3.0 might not be the best Ozzy strategically, he was the most fun Ozzy by far. From the moment he playfully slapped a paint-soaked hand on Jeff Probst’s shirt on Day 1, this was an Ozzy who felt comfortable being goofy and over-the-top, much more so than he’d been in the past. He still had the arrogance from his previous two seasons, but for a guy who had been pretty laid back to an almost numbing degree in the past, a little more playfulness was welcome. Even in his more douchey moments, like declaring himself a lone wolf after his tribe betrayed him or selling a ridiculous story at Redemption Island, were done in such an exaggerated way that it caused a smile along with the typical eye-roll.

Before the angry replies come in saying I’m just ranking Ozzy based on some good TV-based curve, the main reason Ozzy ranks this high, and ahead of Tina, is because Ozzy got to play the perfect game for him on the grandest scale possible. Redemption Island was a twist built for somebody like Ozzy who dominates in challenges, and he knew that going in. So, when faced with the opportunity to go to Redemption to keep his tribe’s numbers up, it should have come as no surprise when Ozzy willingly volunteered to do this. Sure, it was an incredibly risky play, but it made perfect sense to him and created an incredible moment of TV.

When he got voted out for the second time, he was able to eschew all of the strategy and social politics and just survive by winning challenge after challenge. While Ozzy winning this way would have been unsatisfying for most viewers, his situation created a pretty good underdog story. Traveling this path in the game almost worked out for him, but instead, he became the first (and so far only) Survivor player to be voted out three times in one season and another member of the Day 38 club. 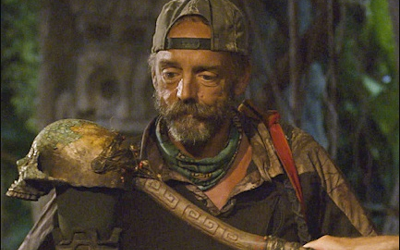 He spits. He eats spa food. He sticks to the plan and laughs maniacally about it. When it comes to pure likability and raw hilarity, very few can come close to Keith Nale. A complete fish out of water in every sense of the word, every aspect of Survivor seemed to catch Keith by surprise. His son Wesley was the big fan of the show, and Keith was just along for the ride in this Blood vs. Water season. It wasn’t long, however, before it became apparent who was the bigger star of the two. Keith won many fans over with his gruff Southern charm and authentic reactions to all of the ridiculous situations the game of Survivor had to offer.

Keith was, strategically speaking, completely out of his depth. He was the guy who recoiled in fear upon discovering a hidden immunity idol, who regularly berated his younger tribe members for not living up to his standards of work ethic, and who actively encouraged expressing bodily functions much to the dismay of others. Keith was content to do what Keith wanted and didn’t have much consideration for how that would affect his game. The infamous “stick to the plan” moment was the ultimate example of Keith’s carelessness, a sudden outburst that indirectly caused his son’s elimination that same night.

From that point on, Keith became much more of a follower and a useful tool to Natalie Anderson, who used Keith to eliminate her sworn enemy Jon Misch at the Final Six. After winning immunity at the Final Five, Keith was one more challenge away from getting to the finals, but ultimately lost the challenge and got outplayed by Natalie, who convinced the other players to send him packing.

While Keith certainly fits in with the group of likable guys who were one challenge win away from potentially winning the game, like Brett, Matty, and Eddie, Keith ranks above them because none of those guys are as bursting with personality as Mr. Nale. Keith is the best kind of funny on Survivor because all of his hilarious comments are real and authentic to Keith; he doesn’t play to the cameras to get attention, that’s just who he is. Plus, he’s got secret old man strength and crazy ball skills that make him a serious threat most challenges. To think, if Wesley never applied for Survivor, then we would have never met Keith; instead, he’d stay in Louisiana, keeping all of his Keithisms to himself.

The fact that Survivor fans from all over voted him into the Second Chance season shows that Keith is a genuinely beloved character (and he was one vote away from becoming the first two-time Day 38 Club member that season!). Keith’s never going to be the guy calling the shots, but he got to Day 38 regardless, mostly by being himself, and as viewers, that’s really all we can ask.

Come back tomorrow as we continue the Day 38 Club countdown.