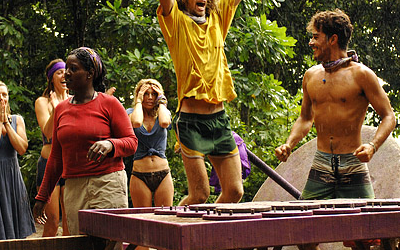 Cirie and Ozzy
“The Couch Potato & the Challenge God.”

Then: Cirie Fields and Ozzy Lusth entered Survivor: Micronesia together on the Favorites (Malakal) tribe, both carrying with them very different reputations. Cirie, the self-proclaimed “couch potato”, developed a reputation as a shrewd strategist and masterful social player in her first season, Survivor: Panama. Ozzy, meanwhile, was seen as perhaps the greatest challenge performer in Survivor history after his time on Survivor: Cook Islands, where he almost won the game in a close vote against Yul Kwon.

On paper, Cirie and Ozzy didn’t seem like the most natural pairing, but the two did end up working together in Micronesia. A “couples” alliance formed early on between Ozzy & Amanda Kimmel and Parvati Shallow & James Clement. The opposing alliance was made up of Ami Cusack, Eliza Orlins, Jonathan Penner and Yau-Man Chan; this left Cirie and Jonny Fairplay in the middle as swing votes. After Fairplay had asked his tribemates to vote him out at the first tribal council, it left Cirie as the lone swing vote in the game. She ultimately decided to join the couples, and they took control of the tribe, eliminating Yau-Man at the request of Cirie, who found him the most threatening.

After the first four eliminations, the tribes were switched. Ozzy remained on the Malakal tribe along with Cirie and Amanda, and the three of them continued to run the game. Ozzy took a more forceful approach, dictating the votes and blindsiding his fellow competitors, including Ami, a fellow Favorite. During this time he also found a hidden immunity idol and created a fake idol to leave in its place. Ozzy and Cirie stayed solid, and along with Amanda, all three made it to the merge.

At the first merge vote, Ozzy continued to feel comfortable and in control of the game. As the last remaining member of the opposing alliance, Eliza was voted out in an 8-2 vote. At the next immunity challenge, Jason Siska agreed to a deal with Parvati to step down for food for the tribe on the promise that her alliance wouldn’t vote him out at the next tribal council. The alliance reluctantly agreed to the deal. However, back at camp, Ozzy, Amanda, James, and Erik Reichenbach, who Ozzy had taken under his wing, reneged on the promise. Recognising Ozzy’s power and the threat he posed, Cirie used this opportunity to plot his downfall; this was the early formation of the Black Widow Brigade. All the women (apart from Amanda) came together to vote out Ozzy, using Jason’s vote to make it happen.

Ozzy was blindsided in a 5-4 vote and left with an idol in his pocket. It has gone down in Survivor history as one of the most shocking blindsides of all time. Ozzy became the second member of the jury, while Cirie went on to control the rest of the post-merge game along with Amanda and Parvati. She pulled off blindside after blindside, before a surprise Final 2 sent her out in third place.

Now: Survivor: Micronesia aired eight years ago, so Cirie and Ozzy have had plenty of time to heal old wounds. Both have also played since then, Cirie on Heroes vs. Villains where she was an early boot, and Ozzy on South Pacific where he finished in fourth place after returning from Redemption Island. It’s safe to say that both have more recent Survivor nightmares in their mind than what happened on a season eight years ago.

Unlike the other connections we’ve talked about so far, Cirie and Ozzy are starting Survivor: Game Changers on the same tribe. Therefore, even though they played together a long time ago, their connection is likely to come into play. If they were starting on opposite tribes, it could have quickly been swept under the rug. Now they are forced to either become allies or enemies.

It’s unclear what kind of relationship the two former Micronesia favorites have outside of the game. Ozzy is someone that still very much hangs around in Survivor circles and interacts with a lot of players, old and new. Cirie, while still apparently a fan of the show, doesn’t frequent all the Survivor events and get-togethers. Whether the two have had much contact over recent years is hard to know.

Does Ozzy still hold resentment towards Cirie for blindsiding him? Maybe enough to cause a little bit of suspicion and wariness. But knowing each other, and being the relatively “old school” compared the majority of this cast, it could create a bond. Initially, when looking at this cast, it would seem crazy to think of Cirie and Ozzy working together. But the more you think about it logically, the more it makes sense. Both of them will enter the game as significant threats due to their past reputations and so a partnership could prove very beneficial early on.

Prediction: It’s unlikely that Cirie and Ozzy will become best friends and go all the way to the finals together, but a working relationship pre-merge could very easily be on the cards. There will probably come a point when things break apart, and one will have to blindside the other. But if both want to survive the early game, it might be wise holding off on that temptation until the merge.