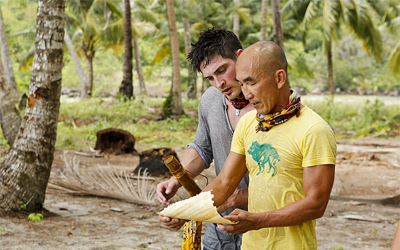 Then: Caleb Reynolds and Tai Trang started Survivor: Kaôh Rōng together on the Beauty tribe. Despite coming from very different walks of life, Caleb and Tai quickly developed a bond and learned from each other’s differences. They were both very survival orientated and became the prominent camp providers.

Caleb cuddled with Tai at night for warmth. He comforted him when he was upset over killing the chicken. The two even shared a “stolen kiss” in a comical moment at camp that highlighted the playful relationship between the two Beauty tribe members.

We were never really shown much insight into Caleb’s strategy during his four-episode stint. The closest we got was a conversation with Anna Khait when she approached Caleb about joining her and the other Beauty girls, Julia Sokolowski and Michele Fitzgerald. Caleb appeared to agree to this alliance. The show portrayed his relationship with Tai as a genuine friendship rather than a formal alliance.

On Day 9, after passing out post-challenge due to heat stroke, Caleb was medically evacuated from the game. It was one of the scariest moments in Survivor’s 16-year history. Tai was visibly upset over Caleb’s unfortunate exit and spoke of how close he and Caleb had become in such a short amount of time. Tai went on to make the Final Tribal Council.

Now: Survivor: Kaôh Rōng is still very fresh in everyone’s minds. It filmed last year and only recently finished airing back in May – it will have been the last season the Survivor: Game Changers cast saw before filming. There are four cast members from Kaôh Rōng on Season 34, so it’s likely they’ll have a lot of eyes on them, and Caleb and Tai are perhaps the closest of the four.

Caleb and Tai are still good friends – Tai even attended Caleb’s wedding earlier this year. People could see a publicly close friendship as a very scary thing on Survivor. If the two share that strong of a bond outside the show, it is safe to assume that same relationship will carry over into the game. Although we have seen outside-the-game friendships break-down in returnee seasons in the past (Boston Rob Mariano and Lex van den Berghe in All-Stars).

Luckily for Caleb and Tai, they’re starting on opposite tribes, so their relationship won’t be blatantly in people’s faces. However, with two Kaôh Rōng members on each tribe, even if the other bonds aren’t as strong, other players are likely to see the numbers advantage as a threat. People on the Nuku tribe might look at Tai and think not only does he have Debbie Wanner on this tribe, but he has close friends in Aubry Bracco and Caleb over on the Mana tribe. Caleb escapes that target a little bit due to only having played with Tai out of the Kaôh Rōng members.

Prediction: There is a high chance that there will be a target on the Kaôh Rōng members going into the season, but if Caleb and Tai do end up on the same tribe at any point, their Survivor bromance will probably be rekindled. Caleb might have been the presence Tai needed in Season 32 to stop him from losing sight of himself and his game. If the two meet up, expect more stolen kisses.