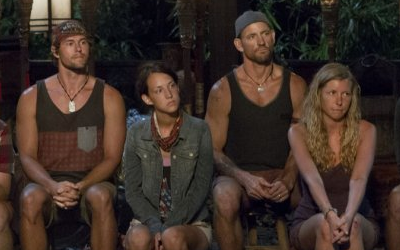 Then: Brad Culpepper and Ciera Eastin started together on the Tadhana tribe in Survivor: Blood vs. Water. Brad took early control of the tribe by forming an all-male majority alliance. Ciera quickly bonded with Katie Collins, but the two soon found themselves on the outs after blowing the lead in the first immunity challenge and costing Tadhana the win. Ciera’s head was on the chopping block, but due to Gervase Peterson’s gloating on the other tribe, Brad turned the vote against his niece Marissa Peterson, in turn sparing Ciera.

Ciera continued to be a weak challenge performer, and when Tadhana lost their second immunity challenge in a row, her name was once again on the chopping block. It was Brad that ended up saving Ciera for the second time, when he convinced the men to vote out Rachel Foulger, in the hopes that her boyfriend Tyson Apostol would switch places with her on Redemption Island. These decisions to get rid of stronger players over the weaker tribe members caused a lot of animosity towards Brad at Redemption Island.

Tadhana’s losing streak continued at the third immunity challenge with Ciera yet again being singled out as the weak link. The tribe decided that Ciera should be voted out over Katie until Brad stepped in with an alternative plan. Brad was worried that his ally John Cody would ditch him and link back up with his wife Candice Cody should she win her way back into the game. He convinced the tribe to vote out John instead of Ciera – another decision which brought Brad a lot of ill will at Redemption Island.

Despite being in opposing alliances, Brad was a big reason why Ciera survived those early votes. However, his willingness to vote out stronger players came back to bite him when Tadhana lost their fourth consecutive immunity challenge. Once again Ciera was a big part of the loss when she blew the puzzle portion of the challenge. Even though Brad considered voting out Caleb Bankston to avoid the wrath of Ciera’s mother Laura Morett, he decided to stick to the plan and vote out Ciera. Caleb became paranoid however when Brad failed to show up for a strategy session and then started talking about how getting rid of someone without a loved one would be a good idea. At tribal council, Caleb flipped his vote, forcing a tie between Ciera and Brad. On the revote, Vytas Baskauskas flipped and joined the girls in voting out Brad.

Brad was eventually eliminated from the game by Ciera’s mom when she beat him in a Redemption Island duel. Ciera went on to the make the Top 5.

Now: Even though never formally aligned, Brad and Ciera’s games are interlinked. Ciera always seemed to be the target pre-merge but was spared due to Brad’s paranoia and his out-of-the-box plans. Whether this bought any good will with Ciera outside the game is hard to say. But Ciera surviving those first few votes allowed her to go onto the merge and prove herself as a scrappy, ballsy player. She also got voted back onto Survivor: Cambodia – Second Chance while Brad had to watch from the sidelines.

During the Survivor: Cambodia pre-game, there was lots of talk about a large Blood vs. Water pre-game alliance. It even had a nickname – “Casa de Culpepper.” The rumour was that Brad Culpepper was putting together an alliance with his former tribe-mates, Ciera, Vytas and Hayden Moss (who was originally in contention for the season), and invited them around to his house for strategy talks. A lot of this is very likely to be conjecture, but the rumour spread and painted a target on those particular cast members. However, only Ciera and Vytas ended up making it onto the season, and Vytas was eliminated first, taking all the heat off Ciera.

The point is, with Brad involved in this season, people might think he was up to old tricks and formed a pre-game alliance with Ciera. But that thought is likely to be fleeting, and once the game starts, it’s hard to imagine anyone looking at Brad and Ciera as a pair – especially as they are starting on opposite tribes. People tend to view Ciera as an underdog style player that often aligns with women rather than alpha male types. Even if they have played together and interacted in real life, they don’t seem a natural pairing in Survivor.

Prediction: Brad and Ciera kind of fall into the middle of the pack regarding cast connections. They won’t be suspicious and out to get each other like say Andrea and Malcolm, nor will they be naturally inclined to link up like Hali and Sierra. If they do end up on a tribe together, they’ll probably already be part of different alliances. It’s unlikely we’ll see this pair working together, although maybe Brad will pull another blindside and inadvertently save Ciera again (or maybe she’ll return the favour this time!).