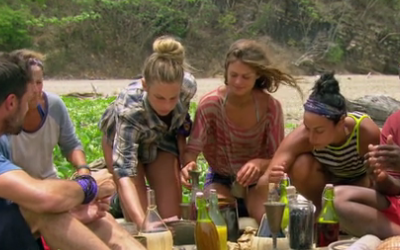 Hali and Sierra
“The Dirty Duo”

Then: The connection between Hali Ford and Sierra Dawn-Thomas is one of the most tenuous of all the Season 34 cast connections – at least if you’re looking at their relationship solely through the prism of Survivor. They only spent a total of six days together on Survivor: Worlds Apart and we probably only saw them interact on-screen the one time. There wasn’t the deep relationship or rivalry like we saw with Andrea and Malcolm or Sarah and Tony.

Hali started the game on the No Collar tribe, and Sierra was a member of the Blue Collars. When the tribes swapped, the two girls managed to avoid each other again, with Hali staying on the Nagarote beach and Sierra remaining on tribe Escameca. All of this time apart pre-merge meant both girls had formed relationships and alliances with other castaways, and therefore never had an actual working connection in the game.

The closest Hali and Sierra came to working together was at the Final 11 when the girls had grown tired of Dan Foley’s misogyny and Sierra contemplated joining Hali, Jenn, and Shirin in voting him out. However, despite considering the flip, Sierra didn’t go through with it, and instead stuck with her Blue Collar alliance and voted Hali out of the game.

Now: The fact that Hali and Sierra’s relationship was so minimal during Worlds Apart works to their advantage in Survivor: Game Changers. They don’t have the baggage that many of these other connections have. Even though they were in opposing alliances, there was never any personal animosity between the pair. They’re both under the radar players, and neither stand out as individuals or as a pair amongst this cast. That should play to their benefit

The two of them spent time together in Ponderosa as members of the jury and post-show became good friends. The bond between the self-titled “Dirty30” cast is well documented within the Survivor community, even if it isn’t all quite as peachy as it might seem on the surface. There is no reason to believe that Hali and Sierra don’t get along judging by post-show events.

Hali is a bit more of a wildcard than Sierra – she seems to have disappeared from the Survivor community and is instead focusing on her law career. Whereas Sierra is still much more active within the world of Survivor, appearing at events and discussing the show on social media with fans and players; this might give Sierra more of an edge when building allies early. Given that they’re on opposite tribes to start, it could lead to a similar situation as Worlds Apart where the two are just on different paths throughout the game. However, this time, Sierra might be more willing to make a move and flip, and if she meets up with Hali at any point, there seems a good chance the two will try and form a working relationship.

Prediction: Unlike Andrea and Malcolm or Sarah and Tony, the former Worlds Apart girls have no reason to distrust each other. They didn’t lie to, or backstab, each other in their first season, and post-show they formed a close friendship. They also appear less threatening than many of the other players and connections on this cast. Therefore, should Hali and Sierra meet up, it seems very likely the two will work together.