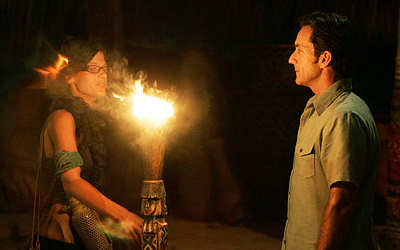 Two things that have always popped on Survivor are snarkiness and underdogs; putting them together is like putting chocolate and peanut butter together, resulting in a delicious combination like Erinn Lobdell. An outcast from almost the beginning, Erinn was the next to go after the first two members of her tribe had been voted out. Except, her tribe never went back to tribal council, allowing Erinn to squeak by into the merge and cause trouble, “sneering” all the while.

Erinn’s desire to flip from her tribe proved especially fortuitous for the other tribe at the merge. The former Timbira tribe held a 6-3 advantage over the old Jalapao tribe, except that infighting riddled the Timbira alliance, with a power struggle between Brendan Synnott and Coach Ben Wade. With this rift fully exposed, Erinn was able jump to former Jalapaos JT Thomas and Stephen Fishbach to take out Brendan. Then, at the very next vote, Erinn helped get the ball rolling on the blindside of Coach’s right-hand man Tyson Apostol, giving Erinn, JT, Stephen and Taj Johnson-George the numbers advantage. Through a combination of luck, cunning, and timing, Erinn was able to turn a “next-to-go” position into an endgame position, which is pretty darn impressive.

In fact, it was almost a fluke that she ended up in the Day 38 Club at all. When JT won the final immunity challenge, his two options to take with him to the finals were either Stephen, his strategic partner/best buddy or Erinn, someone resented by the majority of the jury. In a typical situation, Erinn would have been the most sensible option, except in this case JT was golden either way because the jury absolutely loved him. For JT, it was just a matter of deciding who got second place and who got third; Stephen was his friend, so he gave him second place while giving Erinn a spot in the Day 38 Club.

So while Erinn may not have gotten to Day 39, she can take solace in another club, forever being one of the preeminent snark queens of Survivor. Mostly, it’s just her takedowns of Coach that people remember, but anybody who utters the phrase “Who is this jackass?” deserves adoration simply for that line alone. Erinn might not have been one of the main stars of the action, but she was an important piece of the season, both gameplay- and confessional-wise, and sometimes, as a Day 38 Club member, that’s all you need. 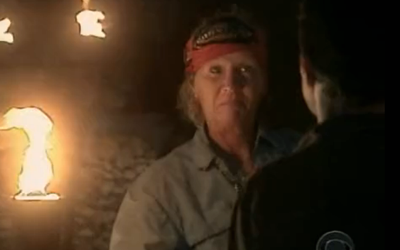 In terms of underdogs who made it to Day 38, Scout Cloud Lee may be one of the biggest, just based on looks alone. One of the oldest women to ever play the game at 59 years old, Scout was detrimental in challenges to an alarming degree and butted heads with the younger tribe members. Behind that grizzled exterior, there was a very sharp and cunning player who knew how to push people’s buttons and had a good sense of timing, knowing when to move from one alliance to another. For a player who was so handicapped physically (she had a legitimate knee issue), Scout indeed proved that it takes more brains than brawn to do well in Survivor.

In the all women tribe of Yasur, Scout naturally fell into the role of the respected elder, at least to some of her tribemates. She chaffed with some of the younger “bowheads” of the tribe but was wise enough to keep those feelings to herself, which allowed her to move through the first part of the game without being targeted. Playing up her elder stateswoman role was enough to get her entrenched in the female alliance led by Ami Cusack, and by the time the merge rolled around the women went into action, wiping out the men until there was one guy left, and that’s when Scout made her move.

Scout, along with her close ally Twila Tanner, had grown discontent with how much control Ami was amassing. So, at the Final 7, they turned to the only guy remaining, Chris Daugherty, to shake up the game in a major way. Scout, Twila, and Chris were all set to work together to topple Ami’s grasp on the game, but the problem was that the fourth vote they needed was that of Scout’s nemesis, Eliza Orlins. From the very beginning of the game, Eliza was the person that got on Scout’s nerves the most and wasn’t afraid to share passive-aggressive comments to her other tribe members. Fast forward to Final 7 and Scout now needed Eliza’s vote to gain control of the game. Luckily for her, Chris put in the work to get Eliza to flip, they took out Ami’s closest ally, Leann Slaby, and were able to ride together until the Final 4. From there, Chris finagled his way into the Final 2 with Twila sitting next to him, leaving Scout on the outside looking in on Day 38.

Scout didn’t play a flashy game, but it was an effective one, biding her time and making enough friends until finding the right moment to strike, propelling her almost to the end of the game. That trajectory, plus her cutting soundbites (seriously, some of her voting confessionals are downright savage) made for a memorable underdog story, and considering this group she’s in, that’s saying something. 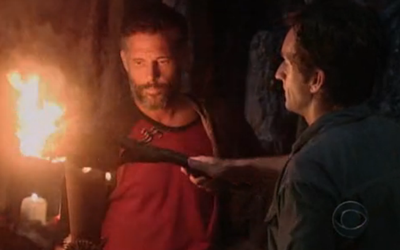 There are many underdog challenge beasts in the Day 38 Club, but when it comes to people who have really fought to stay in the game with their backs against the wall, nobody comes close to Terry Deitz. One of only five people in history to win five individual immunity challenges in a single season, Terry is the epitome of a “challenge beast”. Every single one of those wins was do or die, because the moment Terry didn’t have the immunity necklace around his neck, he was immediately in danger, so he just kept on winning, propelling himself round after round solely based on his challenge wins.

Except, he wasn’t truly at risk once he lost immunity because he had extra protection in the form of a hidden immunity idol; this was back in the early days when the idol could be played after the votes were read. Terry essentially had a ticking time bomb in his pocket. Whenever he didn’t win immunity, he could just lob that bomb at whoever he wanted if the majority all voted for him, so this made him doubly hard to get out of the game. As he watched his allies get voted out one by one, Terry never relinquished his idol to another person, knowing it gave him one more out if he didn’t win the necklace. That strategy paid off, in a sense; the first time Terry didn’t win immunity was at the Final 4, the last time he could have played his idol, so nobody even bothered to vote for him because they all knew he was 100% protected.

It’s a good thing that Terry could rely on various forms of immunity to keep him safe because his social game wouldn’t have been much help. He was pretty bad in trying to negotiate any deals with the majority alliance to protect himself. Also, his competitive drive caused him to be very cocky at times, making him an irritating person to live with and creating a lot of tension around camp. Because of his attitude and poor social game, the majority alliance never made any attempt to include him in their plans.

Still, despite some of his prickly qualities, Terry seemed like a decent enough guy. He was well-liked enough that, nine years later, he was voted in by the fans to compete on the Second Chance season, and with good reason. Terry was incredibly fun to root for, mostly because nobody had been able to run the table at the challenges from an underdog position like he had. Unfortunately, he just couldn’t win that last one, and met his end on Day 38. After his season, Survivor switched from a Final 2 to a Final 3; while it probably wasn’t solely because of Terry, the show probably was sick of the Terry-types going out in 3rd place (except now the Terry-types go out in 4th place). So, if Terry’s place in the Day 38 Club is being the last, old-school 3rd place finisher, that’s a pretty respectable place to be.