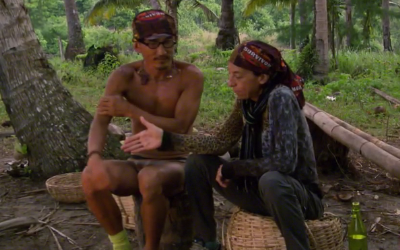 Then: Debbie Wanner and Tai Trang is another loose cast connection. The two spent a relatively short amount of time with each other during Survivor: Kaôh Rōng. Tai remained on the Gondol tribe throughout the pre-merge, whereas Debbie stayed on Chan Loh. It wasn’t until the merge where the two met.

The pair spent a total of 8 days together during the game and at that time were part of opposing alliances. The Brains tribe were outnumbered coming into the merge and looking to pull in potential allies so that they could target the Brawn members. Tai was one of those numbers the Brains were seeking to turn, but Debbie’s approach left a lot to be desired. Tai felt that she was too aggressive and that he could “see right through her.”

Even though Tai reluctantly shook Debbie’s hand and agreed to the alliance, he ended up sticking with Scot Pollard and Kyle Jason. At least until Aubry Bracco got him to flip later in the game but that was after Debbie’s allies had already eliminated her. The interesting point here is that Tai never actually voted for Debbie. In the tribal council in which Debbie went home, Tai had voted for Cydney with Jason and Scot.

Debbie became a member of the jury and Tai ended up making it to the Final Tribal Council. During the jury questioning, Debbie questioned Tai’s flipping back and forth between the guys and girls and asked him “Is there more than one personality in your skull where you were just torn with indecisiveness in your strategies?” Tai argued that he only flipped once, and that was on Scot and that he stayed true to his other alliance, Aubry, for the rest of the game.

Now: Even though Debbie didn’t vote for Tai to win the million, Tai doesn’t seem the sort of person to hold grudges. The interaction between the pair was minimal throughout Kaôh Rōng, so it’s unlikely to have a lasting impact on them heading into this season.

Their primary concern is the same problem we’ve talked about regarding all the Kaôh Rōng players, and that’s the perception of them as a four-strong unit. Whether Debbie and Tai intend to work with each or not, having more cast members than any other season could automatically put a target on their back. They’re also starting on the same tribe and therefore could be in danger more than Aubry and Caleb Reynolds, who never interacted at all during Kaôh Rōng.

Prediction: It could go either way for Debbie and Tai. They might feel inclined to work together for the first couple of votes just out of familiarity. But not having any working relationship in Kaôh Rōng could make them uneasy around each other. They might find themselves more comfortable with other players on their tribe. Most likely a short-lived alliance.

One response to “Survivor: Game Changers Connections – Debbie and Tai”