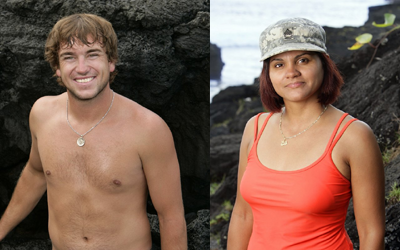 Then: JT Thomas and Sandra Diaz-Twine probably have the most flimsy connection of all the Survivor: Game Changers connections. Even though they both competed on Survivor: Heroes vs. Villains, and both made it to the merge, they were on opposite tribes until that moment. They only actually spent three days together in the game.

In those three days, we never saw JT and Sandra interact on screen. In fact, at the merge tribal council,  the Villains talked about how it seemed like JT had a wall up and was unwilling to play ball with them. The Heroes and Villains were still very much opposed when the merge arrived, even though Sandra did try and clue Rupert Boneham into what was really happening. She told him that Russell was playing them and not to trust him.

Despite Sandra trying to lend a helping hand, JT was reluctant to believe her story. He was, of course, invested in believing Russell, having handed his idol over to him in the previous episode. Once Sandra realized she wasn’t getting anywhere with the Heroes, she stuck by the Villains and voted JT out of the game.

Sandra went on to make Final Tribal Council, where JT voted for her to win the game.

Now: JT and Sandra are starting Survivor: Game Changers on separate tribes. It probably wouldn’t have made much difference had they been together. There isn’t any bad blood between the two stemming from Heroes vs. Villains nor was there any kind of solid friendship formed. People won’t be looking at them as a clear pair.

As we mentioned previously with JT, he doesn’t seem to attend many of the Survivor events, so his interaction with Sandra post-HvV has probably been minimal at best. For all we know, the last time they spoke was at the reunion show. JT has much more to worry about with Cirie, whereas Sandra has to worry about everyone, given that she is entering the game as the only two-time winner.

Prediction: There is no reason why JT and Sandra couldn’t and shouldn’t work together should they end up on the same tribe. As former winners it might be in their best interest to align. Plus maybe somewhere deep down JT regrets not trusting Sandra in Heroes vs. Villains and wants to make up for it. The thing with Sandra is she will work with anyone if it buys her three more days, so if JT is a benefit to her at any point during the season you can be sure they’ll link up.