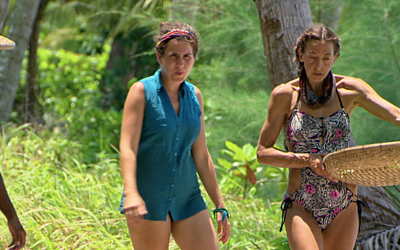 Aubry and Debbie
“The Brains Trust”

Then: Aubry Bracco and Debbie Wanner started Survivor: Kaôh Rōng as members of the Brains (Chanloh) tribe. Initially, the Brains tribe appeared to be split by age, with the older tribe members Debbie and Joe Del Campo on the outs. However, we saw early developments of a bond between Aubry and Debbie.

After suffering an anxiety-related breakdown on Day 2, Aubry found comfort in Debbie, who took care of her and gave her strong words of encouragement. In post-show interviews, Debbie claimed that she convinced Aubry to stay in the game after she considered quitting. Whether that is true or not, it was clear that Aubry and Debbie bonded in those early days on the Chanloh tribe. Aubry later returned this comfort and care when Debbie was suffering from heat exhaustion after a reward challenge.

This early friendship soon evolved into an alliance. When the Brains tribe lost the third immunity challenge, the duo of Liz Markham and Peter Baggenstos set their sights on Aubry and Neal Gottlieb. The plan was to use Debbie and Joe’s votes to take out Aubry or Neal. However, Debbie wasn’t a big fan of Liz and Peter, and so formed a counter-alliance in retaliation. Using her bond with Aubry, the pair were able to bring in Neal to form a majority with themselves and Joe. Aubry initially wanted to target Peter, but Debbie was more concerned about Liz. At tribal council, they split the votes to cause a tie and then voted out Liz on the revote.

On Day 12, the three original tribes were swapped and split into two tribes. Aubry ended up on the new Gondol tribe, while Debbie remained on Chanloh. During this time, Aubry solidified her bond with Joe, and Debbie made inroads with former Brawn tribe member Cydney Gillon. Gondol ended up going to tribal council twice, voting out Anna Khait and Peter.

The two were reunited at the merge and quickly reformed their alliance, along with Neal and Joe. But the four Brains were outnumbered by what looked like a Brawn and Beauty super-alliance. Aubry appeared to be the next in line to be voted out until an infection in his knee pulled Neal from the game. Neal’s removal bought Aubry a few more days and allowed her to work on new alliances. She developed a bond with Cydney, and together with Debbie, they decided to blindside Nick Maiorano. Aubry brought on board Joe, while Cydney convinced Julia Sokolowski and Michele Fitzgerald, and together they voted out Nick.

After the Nick vote, the women seemed poised to take control of the game. But when Julia started playing both sides it made Aubry and Cydney suspicious. Aubry wanted to target Julia, believing her to be much more of a threat in the game, but Debbie was dead-set against it. She wasn’t willing to bend or budge. Debbie’s inflexibility rubbed Aubry the wrong way and despite their friendship, she thought that Debbie was a liability moving forward. With Julia winning immunity and the threat of a potential hidden immunity idol, Aubry and Cydney gathered the votes to blindside Debbie.

Debbie became the third member of the jury and Aubry went on to make the Final Tribal Council. Despite telling Aubry she was proud of how far she had come, Debbie did not vote for her former Brains tribe-mate, instead voting for eventual winner Michele.

Now: The events of Survivor: Kaôh Rōng is still very fresh in the mind. The season only finished airing May 18th and less than two weeks later the Survivor: Game Changers cast were flown out to Fiji to begin season 34. The Kaôh Rōng castaways, of which they are four on this cast, have had little time to digest their season. Yes, it’s been over a year since it filmed, but concerning seeing it on screen and the post-show reactions, it is all still very raw.

Unlike Caleb and Tai, who left the game on good terms with no reason for beef, Aubry and Debbie’s relationship is a lot more up in the air. The two started the game as close friends and allies, but Aubry’s blindside of Debbie must have done damage to the relationship. Debbie claimed not to be bitter, but in her Jury Speaks video, she said that Aubry wouldn’t get her vote because she broke her word and went back on her promise to never write down Debbie’s name. Even though she was proud of how Aubry transformed from the neurotic nerd to a geek goddess, she believed that people who were willing to sell out their word in the game carried that into real life.

It’s unclear how much Aubry and Debbie have interacted since their season finished filming. In many of her post-show interviews, Debbie has said how she “adores” Aubry, but there certainly didn’t seem to be as much social media interaction between the two compared to other cast members. They might have had time to clear the air at the live reunion show, but that was such a busy night, especially for runner-up Aubry, that it’s unlikely they had any in-depth chat.

The good thing for the both of them is that they are starting on opposite tribes. They have the chance to build new allies and not have to worry about each other and where their relationship stands. The bad thing is that people might see them as a pair regardless of whether they are still on friendly terms or not. As we mentioned with Caleb and Tai, having four Kaôh Rōng spread across the cast is going to cause suspicion simply due to numbers. Even though Aubry blindsided Debbie and Debbie didn’t vote for Aubry to win, people will more likely remember them working together at various points throughout the season.

Prediction: Aubry and Debbie are in a position of “Damned if they do, damned if they don’t.” Even if they actively distance themselves from each other, people will be suspicious that they are secretly working together – kind of like how people were suspicious of Amanda Kimmel and Parvati Shallow in Heroes vs. Villains. The best bet for them might just be to work together should they meet up in the game. However, it seems unlikely that Debbie will be able to trust Aubry entirely after she went back on her word the first time. On the flip-side, Aubry is more likely to form new allies so that she doesn’t have to worry about where her former Kaôh Rōng cast members stand.

One response to “Survivor: Game Changers Connections – Aubry and Debbie”