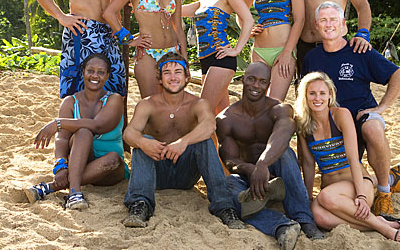 Cirie and JT
“We Can Be Heroes”

Then: Cirie Fields and JT Thomas were both members of the Heroes tribe on Survivor: Heroes vs. Villains. Much like in Micronesia, Cirie came into the game with a big reputation as a killer strategist and major social threat. In fact, her performance in Micronesia only helped make her a bigger target heading into this season. JT, likewise, entered the game as a major threat, having previously won Survivor: Tocantins in a unanimous jury vote.

Despite their reputations, Cirie and JT both managed to get within the majority in the early days of the game. Cirie bonded with her former Micronesia cast-mates Amanda Kimmel and James Clement, whereas JT was playing a more villainous game, making promises to opposing alliances. That opposing alliance was comprised of Colby Donaldson, Stephenie LaGrossa and Tom Westman. The trio saw Cirie has a deadly social player and the leader of the other alliance. But JT stuck with Cirie and her alliance for the first two votes, voting out Sugar Kiper and Stephenie.

After the Heroes lost their third immunity challenge, Colby and Tom once again targetted Cirie. Their plan involved getting JT to switch his vote from Colby to Cirie and Tom playing his hidden immunity idol. With Cirie’s alliance splitting their votes between Colby and Tom, it would mean a 3-2-0 vote if Tom played his idol and JT decided to flip. Which is exactly what happened. After contemplating the decision, JT recognised how much of a threat Cirie would be down the road. He flipped his vote, sending Cirie out of the game and cementing himself as the leader of the Heroes tribe.

JT went on to control the Heroes tribe; acting as their main decision maker. They got rid of Tom and James at the next two tribal councils, further cementing JT’s alpha dominance. After discovering a hidden immunity idol, JT thought the best course of action would be to hand it to Russell Hantz after an immunity challenge, believing that an all girl alliance was running the Villains tribe. This plan would backfire when JT’s own idol was used against him at the first merge vote, when Parvati played it, and another idol of her own, to save Jerri Manthey and Sandra Diaz-Twine.

Now: Cirie really drew the short end of the stick for Survivor: Game Changers. Not only is she on the same tribe as the man she voted out in Micronesia, Ozzy, but she’s also got the man that voted her out in Heroes vs. Villains to contend with. The Cirie/Ozzy/JT dynamic should be one of the most interesting aspects of the Nuku tribe.

It’s unlikely that Cirie and JT have spent much time together post-HvV. Neither of them are frequent attendees of Survivor events and functions. Their initial reunion in Fiji could be quite awkward and tentative. Unlike Cirie and Ozzy who have had 8 years between Micronesia and this season, Cirie and JT have had just 6, and it was both their last time playing, so it will be their most recent Survivor memory. JT might be more concerned with his idol blunder, but Cirie certainly won’t have forgotten JT flipping and voting her out.

Also, Cirie and Ozzy worked together as allies for much longer. Cirie and JT only voted together twice, and even then, their relationship was a cautious one. Unless both are willing to put aside the past, it seems likely that things will continue where they left off in Heroes vs. Villains.

Prediction: As much as it would be a dream to see Cirie and JT drop the beef and work together to form a supreme strategic duo, it just doesn’t seem realistic. There will be too much apprhension and suspicion on both ends to create any sort of lasting bond. It wouldn’t be surprising to see both players on opposite alliances right from the very start.