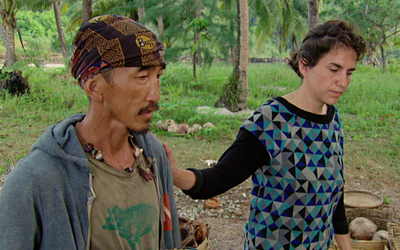 Aubry and Tai
“The Head and the Heart.”

Then: Out of all the Survivor: Game Changers cast connections, the one between Aubry Bracco and Tai Trang be the tightest. It was perhaps the relationship that had the most air-time dedicated to it during Survivor: Kaôh Rōng. A true friendship developed between the pair over the course of the season.

Aubry and Tai started on separate tribes but met after the tribe swap when both ended up on the new Gondol tribe. Initially, their relationship was a cautious one. The Brains had the majority on the new Gondol tribe, and Aubry originally wanted to target Tai, seeing him as more of a long-term threat than Anna Khait. But her fellow Brains saw Anna as a more immediate problem and so she was voted out, sparing Tai. At the next Gondol tribal council, the alliance of Tai, Julia Sokolowski, and Scot Pollard tried to convince Aubry to join them in voting out Peter Baggenstos. But Aubry was non-committal. At tribal, Aubry switched her vote, eliminating Peter and saving Julia.

It wasn’t until well into the merge where we saw the real connection between Aubry and Tai. After Neal Gottlieb’s medical evacuation, the women of the tribe had taken control by blindsiding Nick Maiorano. Tai was on the outs alongside Scot and Kyle Jason. But in this time he’d developed a friendship with Aubry and was considering working with her. However, when his allies discussed targeting Aubry at the next vote, it started to make him wary of his alliance. Tai became further conflicted when Jason and Scot began sabotaging the camp by hiding tools and putting out the fire. All of this led to the moment when Aubry had a frank discussion with Tai about how he was playing the game. They connected on a personal level, and Aubry was able to flip Tai, causing him to turn on Scot and Jason, and handing control of the game over to Aubry.

From that moment forward Aubry and Tai became a tight pair, but there were still a couple of bumps in the road. Tai wanted to vote out Michele Fitzgerald instead of Jason and used his double vote advantage to try and make it happen. However, the rest of his allies voted for Jason, and Aubry didn’t inform Tai she was planning to vote that way. Tai was a little upset, but Aubry was able to rebuild the connection by again appealing to his emotional side.

At the final four, Tai voted with Aubry against Cydney Gillon, causing a tie and sending it to a fire making tiebreaker which Aubry was able to win. They both made it to Final Tribal Council and ultimately lost to Michele.

Now: There is no reason to think Aubry and Tai aren’t still good friends. They have appeared in photos together post-show and regularly interacted through social media. They never had to vote against each other either, so there is no bad blood in a game sense.

Perhaps what might keep them from aligning again is if Tai felt at all manipulated by Aubry in Kaôh Rōng. Even though there was clearly a friendship between the two, Aubry did use that to her advantage in the game, and watching it back on television Tai might have felt slightly played. Tai might want to distance himself from Aubry this season if he doesn’t want people to perceive him as her puppet.

The other problem is the Kaôh Rōng stigma. Four people from the most recent season and Aubry and Tai are the connection that people will be most wary. Everyone has just seen them play and make Final Tribal Council together as a working alliance. Luckily, they’re starting Survivor: Game Changers on different tribes, but the mere thought of them meeting up could be used as a reason to target either one of them. It’s because of that the two might choose to form new alliances and stay away from each other if possible.

Prediction: All eyes are going to be on Aubry and Tai, even before they get a chance to meet up. If they do end up together on the same tribe, they probably will try and look out for each other if at all possible. It doesn’t seem likely that they’ll be actively gunning for each other, and if either one is in need of a number, they have an open line of communication. If given the chance, Aubry and Tai could very well work together again.