Some time long ago, on a forum far far away, an eager Survivor fan decided to apply media theory and statistical analysis to his favorite TV show to try and determine who the winner of the season was based on the editing. There are all sorts of different Survivor fans – from casuals to superfans, to newbie fans. But there is a special selection of the Survivor nerddom that is known as the Edgic community, and each season they dedicate their time to thoroughly analyzing the individual edit of each player.

Admittedly, Edgic isn’t for everybody. Many people like to enjoy Survivor at face value and not think too hard about what the edit is trying to tell us. That is perfectly fine. But here at Inside Survivor, we like to cater to all kinds of Survivor fan, and so we thought an Edgic feature could be an interesting addition to our Survivor coverage. However, rather than using Edgic to focus primarily on determining who the winner is, we will instead be using Edgic as a device to work out what it tells us about these characters and their story arc.

Edgic is a portmanteau that combines the words Editing and Logic. It is a concept that was originally devised by the good folks on the Survivor Sucks forums to try and determine the winner of each Survivor season based on the edit. Edgic assigns a rating to each player per episode based on their portrayal, the percentage of screen-time, and other varying factors. While Edgic was created to determine the winner, it is also a useful tool for mapping a character’s objective story arc throughout the season.

How Does Edgic Work?

After each episode, a player is assigned a rating based on their edit. There are three principal components in determining this: Rating, Tone, and Visibility.

Rating = the personality type of a player.
Tone = whether this personality was portrayed in a positive or negative light.
Visibility = the amount of screen-time dedicated to a player. 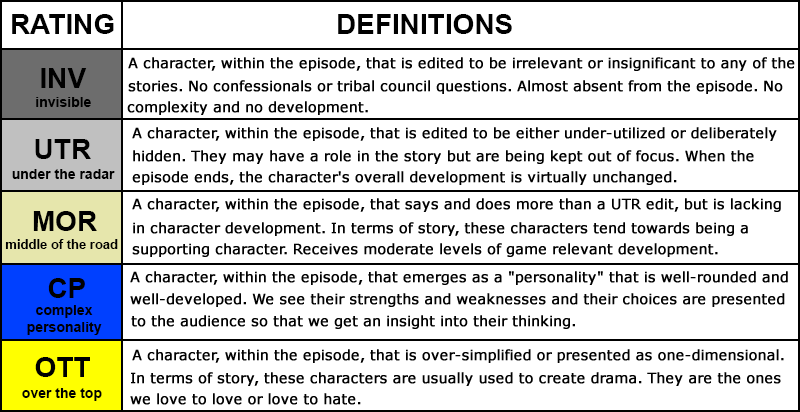 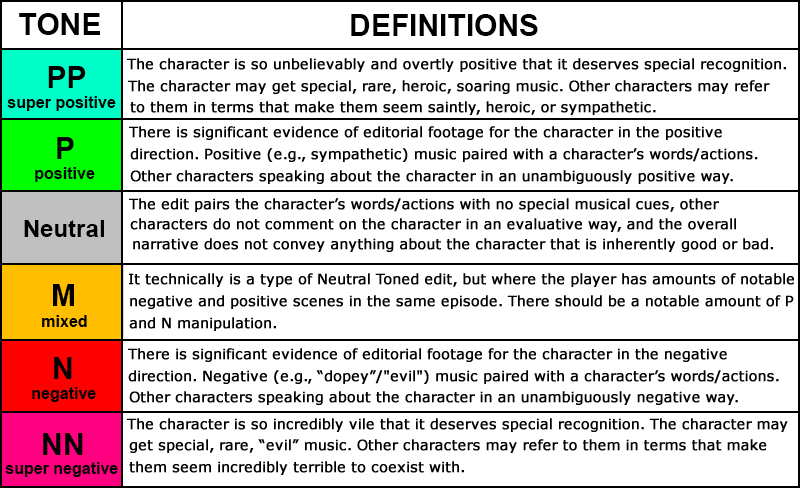 Below is an example of how Edgic works and what it looks like. This chart shows the Edgic rating for Survivor: Cambodia – Second Chance players based off of their first season. 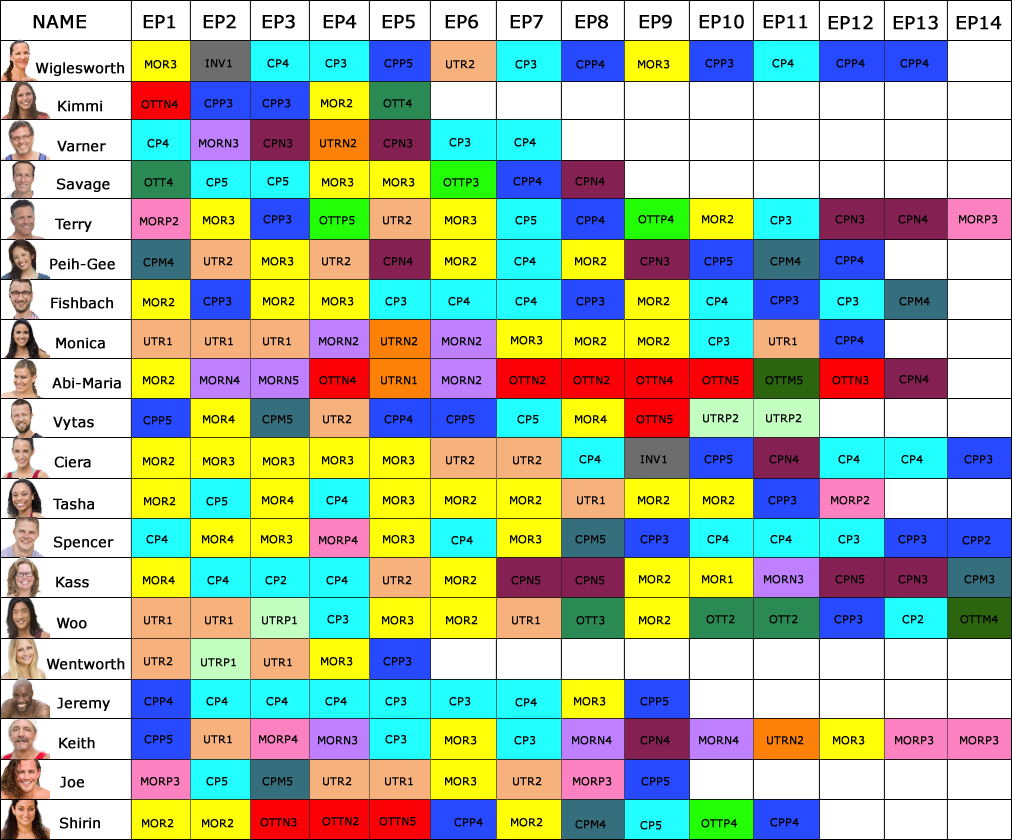 What Does This Tell Us?

Characters that have an abundance of OTT ratings almost never win the game. Of course, there are exceptions like Jenna, Bob, and Fabio, who have a number of OTT episodes, but none of them have more than three OTT episodes per season. An OTT edit is usually more character focused than game focused. Those with a significant amount of OTT episodes, like Abi-Maria and Shirin, are relied on by the editors to deliver drama. This can be positive or negative. 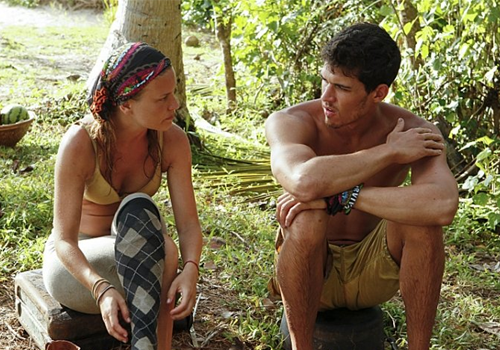 Abi’s story-arc is one of the most negative arcs in the history of Survivor. From the mid-point of the season, she became a reliable villain and the editors very rarely portrayed her as anything else but that. Whereas Shirin’s story-arc showed an upward trajectory, starting with a one-dimensional OTT negative edit, before exploring the complexities of her personality, leading to an OTT positive edit, and finishing as a rounded personality.

On the flip-side of that, you have the UTR edit. Characters with a large proportion of UTR episodes also rarely win the game (again there are exceptions like Vecepia, Sandra, Danni and Natalie White). Characters with a majority of UTR edits don’t tend to have a significant impact on the narrative of the season. Coming into Survivor: Cambodia – Second Chance, the popular opinion seems to be that Kelley Wentworth and Monica are the two lesser known characters. The amount of UTR ratings that Wentworth and Monica have in the above chart backs that opinion up. 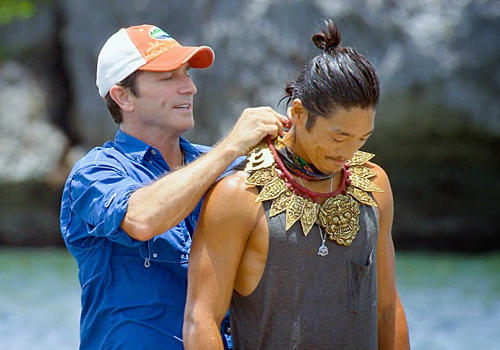 Woo has a very interesting story arc because he has the same amount of UTR episodes as he does OTT episodes. However, all of Woo’s UTR edits happen in the first half of the season, whereas all of his OTT edits occur in the second half. What this tells us is that pre-merge Woo didn’t play a significant role in the story or strategy, but the editors kept him bubbling just under the surface because they knew he would last all 14 episodes. In the latter half of the season, he became an OTT character when the more strategic and story relevant characters had been eliminated. However, Woo remained a one-dimensional character, meaning his chances of winning were always extremely slim.

Characters with a fair amount of MOR edits early in the season, like Stephen, Ciera, and Spencer, tend to be people who will play a bigger role later in the season. These are characters that the audience should keep an eye on. While they may not be driving the narrative at the start, the editors intentionally give them a substantial amount of screen-time to help establish them as supporting characters, so that when their time in the spotlight comes we at least have an idea of who these people are. When we begin analyzing Survivor: Cambodia, we should pay close attention to those that start with MOR edits before slipping into CP edits, because this will give us a big hint at that character’s future story-arc. 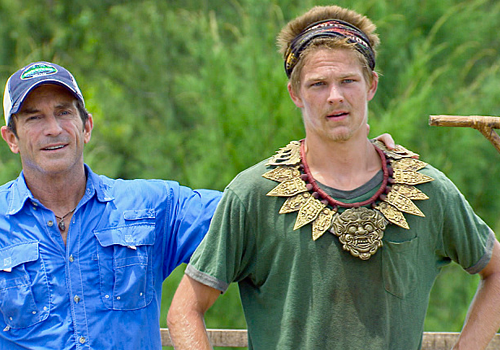 The CP edit is the sweet spot, as these characters not only receive a significant amount of screen-time but the audience gets to hear their thought process. If a character gets a large amount of CP episodes, it usually means that they are receiving a lot of confessionals and explaining their decisions to the viewing public. We get a more rounded picture of these character’s personalities, and they often drive the narrative of the season. Jeremy is a textbook example of this, as he received a CP edit in all but one of his episodes – we saw a large portion of the game unfold through his eyes. Characters with a positive or neutral CP edit have a good chance at winning, whereas those with a majority of negative CP edits will play a significant role in the season but very rarely win (except Tony in Survivor: Cagayan). In Survivor: Cambodia we will focus on those receiving a large amount of CP edits, as their story-arc will help us work out the overall narrative the season is trying to tell.

What To Expect This Season?

After every episode, we will analyze each character’s edit, using a combination of our own reading of the episode and those of the Inside Survivor readers and Survivor Sucks members. We will assign each player a rating for that episode and compare and contrast it to their previous ratings throughout the season. By doing this, we aim to work out what this tells us about a particular character’s story arc and try to predict their most likely narrative for the season, as well as a brief discussion on their chances of winning.

For all you Survivor Edgic nerds out there, I hope you join us for our inaugural Inside Survivor Edgic feature for what should be a very fun and interesting season.

Thanks to the Survivor Sucks forum for definitions and previous Edgic ratings.

90 responses to “Survivor Edgic – An Introduction”