Edgic is a weekly feature analyzing each player’s edit, mapping characters to their story-arc. Note that our focus is not solely to determine the winner, as is typical of other Edgic sites. For more information on how Edgic works and rating definitions read our Introduction to Edgic article.

You can read all our Edgic posts for last season here.

This episode was a perfect example of how little the editors care about Chelsea. She won Reward, she won Immunity, she was named as part of the plan to flip on Naviti, and she was the only other person apart from Desiree that voted for Michael. And yet, we never heard from her. Not a single confessional. Not even a basic narrational confessional about her challenge win. We had no idea what she thought about Desiree’s plan to flip on Kellyn or what she made of all the chaos going on at camp before the vote. If the edit doesn’t care about Chelsea, then why should we?

As with many of these characters, there isn’t much to say about Jenna and her edit. She was involved in a couple of camp scenes, one where she agreed with Desiree that it was time to take out the Navitis and another where she backed-up Laurel’s claims to Kellyn. That’s about it. There is no story here. No hook. She isn’t significant to any of main narratives. Even the stuff with Sebastian which started to receive focus pre-merge has completely disappeared. The future is grim for Jenna. 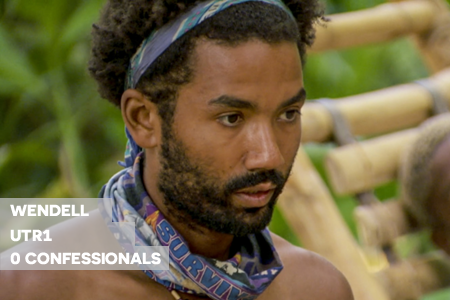 It’s a little worrying that Wendell slipped to UTR1 this week. He’s really increased in visibility and complexity these past few weeks, and so to suddenly drop off like this is worth noting. In the past 16 seasons, only one winner has been UTR at the merge, and that was Natalie Anderson in San Juan Del Sur. And it’s not as if Wendell needed to be protected in this episode; he didn’t lose one of his closest allies or vote for the wrong person. So why did he disappear?

At Tribal Council, he said he was being a “listener and an observer,” and that could go some way in explaining his UTR edit. Similar to how Domenick said he was going to take a step back last week. But at least Domenick got a confessional to explain that strategy in more detail. This was a short Tribal answer and nothing more. Wendell is still a top contender, and I personally think it’s either him or Domenick winning based on the edit of the season, but when you combine this with his previous incorrect reads, it starts to take its toll. Wendell needs a bounce-back episode next week; otherwise, Domenick will continue to inch ahead.

Middle of the Road

Angela managed to avoid the slip back to UTR this week, but only by the grace of going to Ghost Island. I can’t imagine she’d have received much airtime if she hadn’t drawn the white rock. Her Ghost Island scene was as lackluster as Jenna’s last week. She had a chance to play the game but came up short. There was no personal content or big emotional confessional. She also said she thought Naviti was going to stick together, which was obviously incorrect giving the chaos happening back at camp. The camera even zoomed in on the “One Bad Decision” sign, just like it did previously during Kellyn’s Ghost Island visits.

Much like Chelsea, Angela was named by Desiree as a number on her side, but we never heard Angela’s opinion on this move. There was also no follow-up on her Episode 9 edit where she started to take control of her own fate. As with many of these character edits, there is no consistency or urgency, Angela is nothing more than a bit-part player. 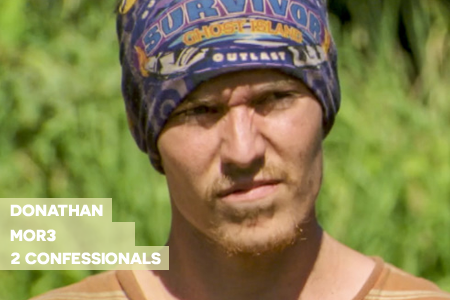 Donathan‘s edit was pretty much the same as last week’s. He was once again in the middle of this Naviti vs. Malolo battle, and much like last week, he said he was open to flipping on the Wendell and Dom alliance. However, Laurel was given much more focus, and she told us she trusted Wendell and Dom a lot more than Desiree. Therefore, Donathan failed to get his way. His other big scene revolved around his idol find, but this also came with some worry. Michael said that one of the biggest mistakes you can make in this game is letting people know you have an idol (though he’s done that himself this season), and then Donathan told Laurel, Michael, and Jenna about his idol. Yes, he said he needed them to help him retrieve it, but it still could be foreshadowing Donathan’s downfall.

I still expect Donathan to most likely make the finale episode, but he could do with a CP edit next week to let us know where his head is at. Right now, he is becoming second fiddle to Laurel. 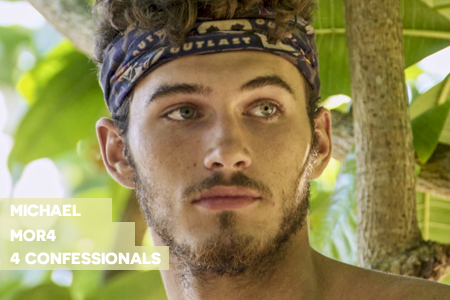 Michael was very visible this episode and was definitely involved in the strategy, but not quite enough to push him into CP. His content is all about being on the bottom and fighting for his spot. As I’ve said before, many times, his edit continues to hit the same beats. There is very little to expand on. During the picnic reward, he pitched his case to the group, letting them know he could be a loyal vote for them going forward. That fell on deaf ears. He later went idol hunting, though he came up short. But regardless, Michael survived, despite the likes of Kellyn wanting him gone immediately. Could Michael fight all the way to the end and win? I wouldn’t say it’s impossible, but I think it’s unlikely. His edit feels much more like the rootable underdog that comes up short, rather than the season winner. 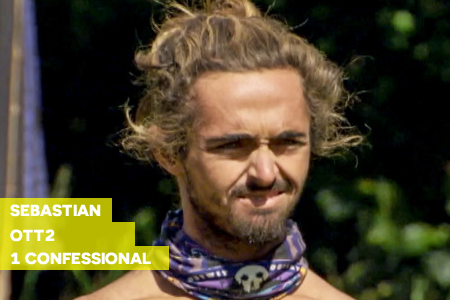 I went back and forth on UTR or OTT for Sebastian this week. Either seems reasonable. I leaned towards OTT because his one bit of content was talking about Jurassic Park and “feeling high.” That’s two weeks in a row where the edit has left in a reference to Sebastian being high, which is clearly intentional. Sebastian is not a character important to the narrative. In fact, he is barely featured at camp or in the strategy scenes. There was no discussion of where he stood this week or who he’s aligned with. He is just a goofy character that the editors sometimes have fun with if they can fit him in. 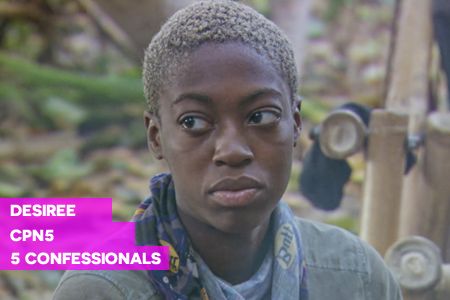 As soon as Desiree had the confessional about being homeless, followed by significant strategy talk, we knew it was all over. A big bit of personal info combined with in-depth strategy gave her her first CP rating of the season, and it was a classic sudden CP-boot episode. I said last week that Desiree’s lackluster edit didn’t give me faith in her being able to pull off a big move because there just wasn’t enough importance placed on her story. And this episode went pretty much as expected, Desiree tried to flip the game, but Edgically, you knew it was fruitless.

The reason for the Negative tone is because she got caught in a lie and received backlash from the other players because of that. Even though she explained why she had to lie, there was still an overall feeling of negativity to Desiree’s exit. Domenick called her “erratic.” The edit did give Desiree credit for trying to make a move, and that falls in line with the little bit of background credit she’s received throughout the season, but again, she had no clear, consistent narrative. Overall, I’ve decided on MOR for Desiree’s season rating, while she was underedited for the most part, when she was shown, it was usually game related. 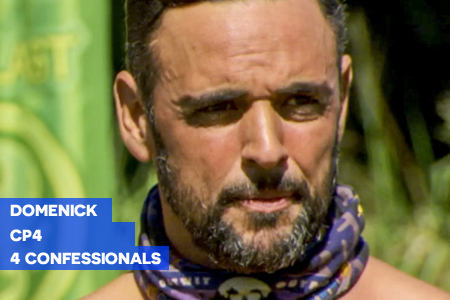 Domenick continues to shoot back to the top of the contender list. He’s alleviated all worries of his post-Chris story; he is still very much a vital component of the season. Last week he told us he was taking a step back, which explained his lower vis MOR rating, and this week he was back in action, shown to be taking a proactive approach to squash the threat of an uprising. While Wendell disappeared, and Kellyn was wrong, wrong, wrong, Domenick was shown to have a correct read. He rightly believed what Laurel told him, he correctly informed Kellyn of the potential flip, and he felt confident that Desiree had to go – but wasn’t shown forcing his agenda like Kellyn. In the end, Domenick got his way. 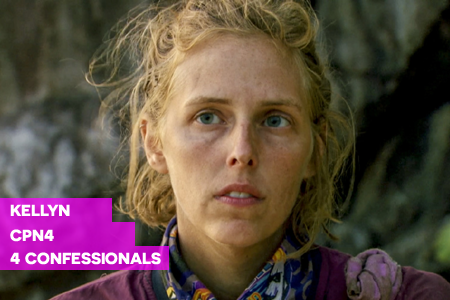 This was a really bad episode for Kellyn. I’ve been saying the past couple of weeks that Kellyn needs to kickstart her individual story, that is what she promised in the last episode before the merge, and yet she is still sticking with this “Naviti strong” mindset. That was an ominous sign and this episode proved exactly why. Kellyn’s blind faith to the Naviti alliance almost cost her her spot. She refused to believe that Desiree had turned on her. We saw multiple players telling her the truth, and every time, Kellyn ignored it, instead choosing to stick with her gut. Following her gut has been her main theme of the season, but obviously at this point, her gut is steering her wrong.

The negative tone is rather self-explanatory, she was painted in a bad light for not believing the truth, and her argument with Domenick regarding the vote was also presented in a less than favorable fashion. Ultimately, Kellyn did vote for Desiree, so her next episode will be very important. She needs to explain herself, and ideally, start thinking about her individual game. 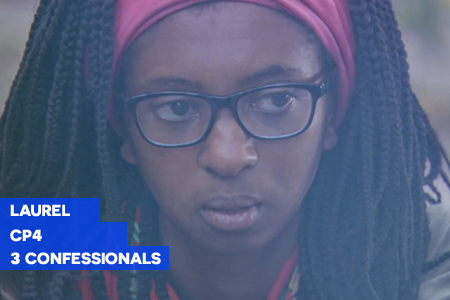 Since the merge, Laurel has probably had the third best edit, behind Domenick and Wendell. It doesn’t quite make up for her mostly lackluster pre-merge, but at least the edit has made it clear that she’s a crucial part of the post-merge narrative. The positives in this episode are that Laurel was presented as someone in control and with options. We already know she has an alliance with Donathan, Domenick and Wendell, but this episode Desiree approached her too, and that shows us Laurel has strong relationships. She also handled the Desiree situation calmly and efficiently. The other positive is that Laurel receives confessional time to explain herself in detail. We saw it last week after her Wendell chat, and then again this week regarding Desiree and the potential flip.

The worry for Laurel is whether she has missed her opportunity to make a move. It’s still unclear whether we’re meant to think that or not based on the current edit. For the past two weeks, Donathan has been the one pushing for a flip and to join forces with Malolo, but Laurel has been the one to get her way, wanting to stick with Dom and Wendell. Given that Laurel’s edit isn’t as fleshed out as a Dom or a Wendell overall, I have to believe that ultimately, her edit is leading to coming up short.

Weeklies23 Nov 2022
Previous
« Next Time On Survivor – Episode 11
Next
Historical Perspectives: As I Lay Here Lying »