Each week on Inside Survivor we will be naming one castaway from the current season the title of Player of the Week. After reviewing the latest episode, we will determine which player impressed us the most with their social skills, strategic prowess, craftiness, and creativity. We will keep a tally throughout the season so that we can keep track of who is impressing the most.

Yesterday we opened up a fan poll for the Inside Survivor readers to vote on their player of the week for Episodes 10 and 11. Currently leading the fan poll is…

Inside Survivor’s choice for Player of the Week for Survivor: Cambodia – Second Chance Episodes 10 and 11 is… 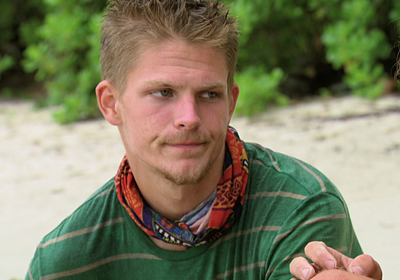 Here is what the Inside Survivor contributors had to say about Spencer Bledsoe after Episode 10 and 11:

Martin: In my opinion, the blindside of Stephen Fishbach was the best move of the season so far. It required subtle planning, expert timing, reserve, and patience. Kelley Wentworth definitely deserves credit here too (hence why she is closely behind Spencer in the fan poll), but it was Spencer’s ability to regain the trust of Jeremy and Stephen and retrieve vital info that just tips it in his favor. Hanging out Joe as bait, while scooping up a group of outsiders to take out the guy who had an advantage and a four person alliance, puts Spencer in a position of control for the first time.

Jacob: Spencer broke my heart this week, but it doesn’t take away from his incredibly immunity win and, most likely, smart play to betray our fishy friend. Spencer has put himself in a very, very good position for the rest of this game.

Shawn: Spencer finally proved what he could do when he works from a position of power instead of the bottom. In Ciera’s Ponderosa video, Ciera tells Fishbach that it was Spencer who was gunning for Stephen, which came as a major surprise to him. Spencer did a great job of using relationships he built with Stephen and Jeremy to gain a true understanding of where everyone’s heads were. His strategic awareness indicated that it was time to flip sides. On top of all this, Spencer dethroned “Golden Boy” Joe Anglim’s immunity spree, creating a smokescreen for a much bigger vote.

[Credit to http://survivoraddict.tumblr.com/ for the GIFS]

4 responses to “Survivor: Cambodia Player of the Week – Episode 10 and 11”