Sometimes, a Tribal Council can fracture a tribe beyond repair. Other times, it unites them in their shared goal of making it to the end. Either way, the real purpose of Tribal Council (besides voting someone off) is to reveal the tribes’ fractures and social hierarchy. After a rowdy first Tribal, Zamba is doing its best to return to a sense of normalcy.

Shaun, the agent of chaos himself, is grateful to still be in the game, but he needs to do more if he wants to have some security. Tribal did its job in opening people’s eyes, and he plans to use that to his advantage. He’s beginning to plant seeds to players such as Anela and Renier about how big of a threat Dino could be if he goes far in the game. These are two guys that are supposed to be aligned with Dino, so whether or not they are taking this to heart is yet to be seen. However, Anela does admit that it’s smart of Shaun to throw Dino under the bus, and I don’t think this will be the last we hear of this.

To Shaun’s credit, his warnings are not without merit. We don’t see much of Zamba as a tribe, and what we do see mostly revolves around what a big threat Dino is. We already know that he’s not afraid to take big risks, but he is the star of both the reward and immunity challenges. He is the last one on the reward challenge puzzle, which clenches Zamba their first win of the season and a fishing kit. Then, he does it again with Qiean in the immunity challenge. Dino clearly realizes the predicament he is setting himself up for, but he can’t help but want to help his tribe. The real question is whether or not he’ll be able to maneuver himself out of this hole he’s digging himself in.

Zamba’s dynamics seem pretty cut and dry, and with them winning both the reward and the immunity challenges, they have no reason to disturb the peace. The real tribe to watch here is Vuna. Before we go too deep into this, please know that I needed a flowchart to keep up with this tribe, and I still feel like I’m missing some things. Everyone’s making alliances and trying to figure out who they want their true allies to be. It’s very evident that they haven’t been to Tribal yet, because the tribal lines are still fluid. No one has had to prove their loyalties, but something has to give eventually.

The first pair in all this mess is Chappies and Pinty, who connected right away. They pulled in Anesu for a trio, but, of course, Anesu is in an alliance with everyone. To increase their numbers, Chappies pulls in Paul to make their “Formidable Three” and “Formidable Four”. Anesu is uncertain about this choice since she is unsure of Paul’s loyalties. To be fair, I’m not even sure if Paul knows where his loyalties are at this point. We haven’t heard much from him specifically, but we know of him through pretty much everyone else. He is the camp Bear Grylls and is well-liked enough by everyone. Despite not having many solid alliances, everyone seems to believe that Paul is capable of cutthroat gameplay. Of all the castaways, he remains the biggest question mark.

Other Vuna members’ predicaments are more straightforward. Pinty and Carla do not get along and clash almost every time they are sharing the screen. Carla’s closest ally is Mike, someone she admits she is very protective of. Mike isn’t trusted by a lot of people, and his knowledge of the show is making him a big target as well. Kiran is a distant third member of this trio with Carla and Mike, but his closeness with them is what’s causing mistrust between him and other players, specifically Tyson.

At the center of this mess is the trio of Anesu, Tyson, and Wardah. These three have aligned together but are also branching out to form other bonds. Of the three, Wardah is the most under-the-radar player by choice. She knows all of the alliances that Anesu is making, and she’s more than happy to have Anesu bring back all of the information to her. Tyson wants to trust Kiran, but his connection to Mike is holding him back. He’s bonded with Pinty as well, and with that comes information about her other allies.

Sound confusing? Don’t worry, it absolutely is, and I’m still not done. While this complicated web is being spun, the real star of the episode, Santoni, is allowed to shine. While she struggles physically in the challenges, she never gives up, not in the challenges and not in the game. When things come to a boil (again) for Carla and Pinty, Santoni uses the tension to step back and let them make targets of each other.

All of Santoni’s tribemates are prepared for her to be sent to Immunity Island, which is shaping up to be a fantastic twist and effective storytelling tool. Not only does this mechanism take the presumed ‘easy vote’ off the table, but it gives these players a chance to shine in a way they may not have otherwise. And boy, does Santoni shine here. She quickly chooses the “Stay & Play” option, wins the task, and learns that there is an idol hidden in the wall behind the players at the Tribal set. Santoni just needs to grab it anytime she wants to play it.

I thought we were done with Immunity Island after this, but Santoni has one more trick up her sleeve. She realizes that there is probably more than one idol clue hidden here, given the island’s name. She searches and is rewarded with another clue for a different idol hidden at camp. This means that going into the next round of play, Santoni knows where one idol is and is pretty certain that the other one is hidden somewhere near the water well.

Things are looking up for Santoni, but the rest of Vuna is left to scramble. They lose the immunity challenge, so now this complicated web is finally being put to the test. The two names floating around are Pinty and Mike, two players on opposing alliances. The goal with this vote for Vuna is to do what is best for the collective tribe. There are positives and negatives to voting out both players. While Mike is posed as a bigger threat down the line, he hasn’t caused many waves at camp. On the other hand, Pinty’s blunt manner is being blamed for causing fractures within the tribe, but she’s incredibly loyal to her allies.

Both sides make bold attempts to maintain their numbers, attempts that will likely have repercussions moving forward. Hoping to save her closest ally, Carla proposes forming a six-person alliance between herself, Mike, Kiran, Anesu, Wardah, and Tyson. Meanwhile, to solidfy her trust to Tyson, Pinty reveals to him Chappies’ diplomatic immunity advantage. This sends warning signals to Tyson immediately, since he was the one that asked Chappies if he received anything else from the fire-making challenge

Whether Pinty’s reveal to Tyson causes him to flip is yet to be seen, but her move to build trust doesn’t do her any favors. The trio of Tyson, Anesu, and Wardah has been going back and forth all episode about which way to vote. When Tribal does come, they decide to go with Carla’s plan to stick with the six. They want to keep the tribe as a unit, and Pinty is voted out in a 6-2-1 vote. Pinty and Chappies vote for Mike, and Paul inexplicably votes for Wardah because her “cooking sucks.” Once again, Paul is the question mark in the game. 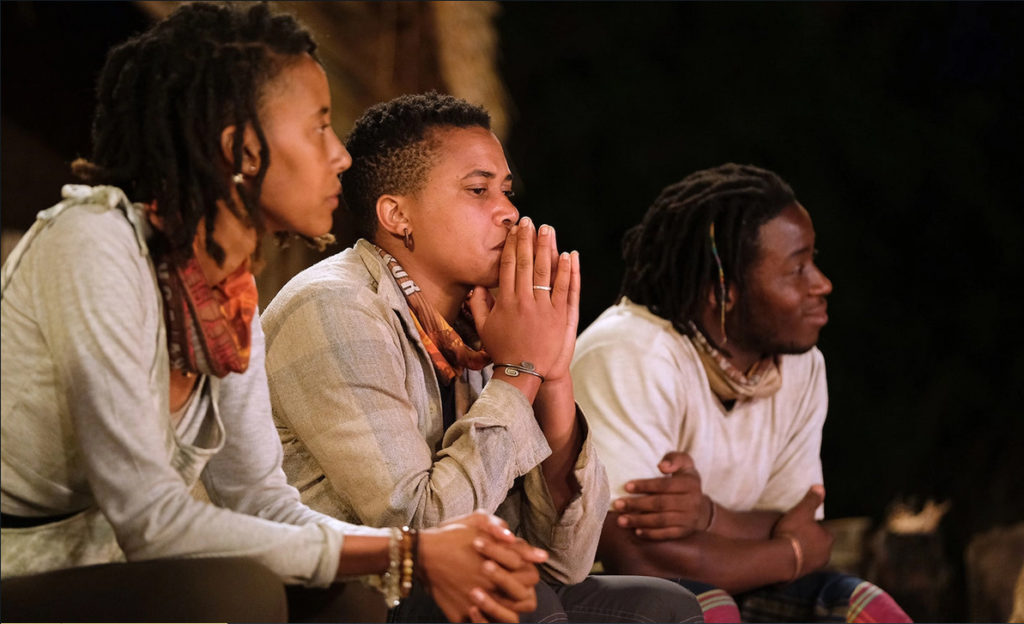 They voted out Pinty to unite the tribe, a move that will apparently all be for naught next episode. It looks like there will be a tribe swap next week or what I’m guessing is 3 tribes of 6. There are a lot of storylines that we didn’t get to see continued in Episode 2, especially from Zamba. Both tribes have been to Tribal Council once and have established a pecking order amongst their tribemates. This swap will put these dynamics to the test, and I can’t wait to see what new collectives are formed.

Survivor Twist Ideas From Other Shows