But before we do anything: I want to clarify something pretty important to this whole prediction blog thing. I avoid spoilers at all costs. Anytime I see a spoiler warning; I click away as quickly as possible. According to several users of the Survivor Reddit community, (reddit.com/r/survivor), this coming episode has been a particularly over-spoiled one around the Internet. One post even pointed out that the 30-second preview video on the Survivor YouTube page, often what is made into the television commercial, has a blatant spoiler within the first half of it.

This blog is for fun. I’m not trying to spoil anybody or ruin episodes. It’s shot-in-the-dark speculation, and I want you all to have fun speculating with me. So, to be transparent as possible, I want to make a promise that I am only using the episode’s “Next time on…” preview in tangent with the latter half of the YouTube preview video, meaning from 0:17 to the end. I am avoiding the first half even if the Reddit community was incorrect. I have also been sure to avoid the Survivor Wikipedia page and any and all comment sections.

That’s out of the way; now let’s get into the blog! 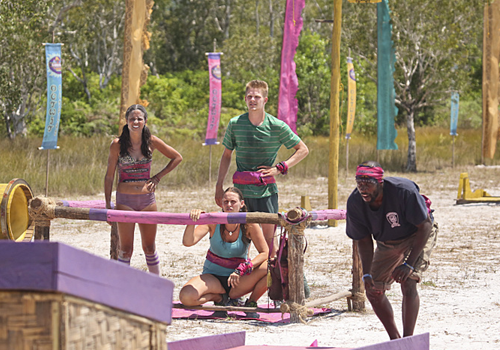 I liked doing this last week, so we’re going to make it a thing. We’re going to review last week’s predictions to see what went as expected and what I completely missed.

1. My bet is on Bayon going to tribal council. I don’t think Ta Keo can lose right now, but Bayon doesn’t appear to be unstoppable. By this merit, I will guess that Monica and Kelly will be on the chopping block. Monica because of her possible scheming and expendability as a physical asset and Kelly because she’s an outsider when it comes to the numbers and eliminating her might be enough to hush Monica’s plans and reel her back in.

Verdict: Almost completely “Nale’d” it. Monica and Kelly were on the chopping block for sure, and I got Monica totally right. Kelly, on the other hand, ended up having nothing to do with anything. Monica’s plan had no follow-through other than an off-hand comment to Kimmi. Still, I’m going to give myself a gold star on this one.

2. Monica is going to start spreading around some ideas about an all-woman alliance, or at least start chatting with Kelly, resulting in a pissed off Kimmi.

Verdict: As I said above, Kelly didn’t appear to hear anything about Monica’s idea, so this was all entirely between Monica and Kimmi.

3. Woo is going to begin winning favor from Tasha and Savage resulting in an eventual Abi vote-off from Angkor. I just don’t think it’s happening this week.

Verdict: We have no true way of knowing unless Angkor goes to Tribal, but I got the feeling that Tasha was ready to dispose of Abi.

Verdict: I’m kind of shocked about getting this one wrong. Did anyone else see him spit? I don’t think I did. 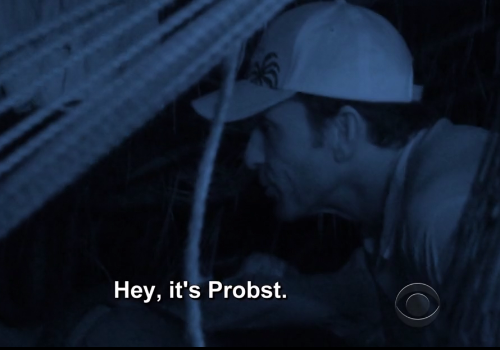 Nothing piqued my curiosity more in last week’s end-of-episode preview than the short clip of Probst coming to camp to seemingly pull someone out of the game in the middle of the night. Followed by a shot of a dejected Kass. The latter half of the YouTube preview adds a few extra bits of dialogue to the sequence.

Probst walks off a boat and onto the beach in the middle of the night. He walks up to the shelter and leans down to whisper to someone.

Shot of Probst back on the boat driving away with another person standing in it followed by a Kass confessional.

Kass: “To have someone have to go home like this… it’s worse than anything you can imagine in Survivor.”

I have to believe my immediate reaction was that of most. I even tweeted it with poor grammar:

A MED-EVAC? WHAT? Dammit. No one wants that. #Survivor

Nobody likes a medevac, especially in a season full of fan favorites. To see a beloved player go down for something out of their control… it always sucks.

But, after watching that little clip a few more times, something hit me. “I need to talk to you,” is not really a greeting of “how are you feeling?” It’s not what I would want someone to say to me if I was in need of a doctor, you know? It hasn’t happened before, but I have started to believe that someone is going to be taken out of the game for cheating.

I know what you’re thinking: Peih-Gee cheated and brought in supplies, and she wasn’t removed from the game. Woo wasn’t taken out of Cagayan after his antics. In fact, there have been dozens of rumors throughout the years of contestants stealing food or water from production tents or sneaking in snacks and supplies; many of whom have been caught such as Richard Hatch and his matches. Never has anyone been taken out of the game for cheating.

Most of these instances have a common thread: a player gets ahold of a material they shouldn’t have and said material is confiscated and never mentioned on air. That means whatever this player has done needs to have been seriously wrong. If it involved illegal supplies, it needs to have been a lot of it. If not… gosh, I really don’t know.

I don’t know how great I feel about speculating on something like this, but if I’m right, and someone is being removed for cheating, I would have to assume it’s someone on Ta Keo, Kass’ tribe because she’s seen in the preview as well. But on the other hand, I’ve been expecting a second tribe swap in the next week or two, so it could be anybody. I stared at that one frame of the boat driving away for way longer than I want to admit, but couldn’t make out who it was on board.

Based off nothing but behind-the-scenes history, I’m going to make a ridiculous prediction. Woo is going to get taken out of the game for stealing valuable items in some shape or form. For all I know, this whole thing, even the “one survivor’s time in the game is about to run out,” is a trick and maybe there’s a swap occurring via night-boat. Either way, this preview has completely screwed me up. 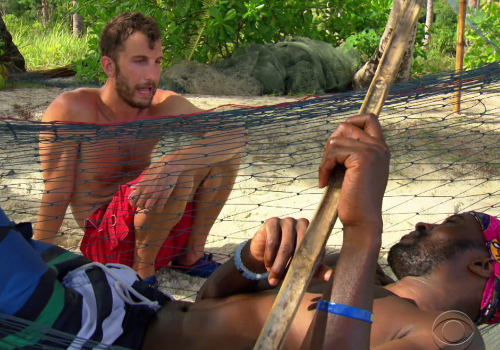 At the beginning of the end-of-episode preview, we get a moment between Stephen and Jeremy with a Probst narration of, “big moves are all about timing.” Stephen is urging Jeremy to consider something, but Jeremy seems a bit less excited.

“This would be the move that set the tenor for the whole season,” Stephen says in a quick cut to a confessional.

Who is currently on Bayon? We have Spencer and Kelly who came over from Ta Keo, as well as Kimmi, Jeremy, and Stephen from original Bayon. Now, if Stephen or Jeremy were to be the target of said “big move,” that would be a shocker. With this current setup, though, that seems somewhat unlikely. And would taking out either Kelly or Spencer, the minority, be very noteworthy? Maybe to the viewers, but not to the players. And as for Kimmi, I don’t really see how eliminating Kimmi would set the tenor for the season.

With all this said, I think I am going to confirm my earlier prediction about a tribe swap taking place this week. Stephen makes it sound like the entire basis of vote-offs is going to drastically change; which has me looking at the boot list thus far. Except Vytas, none of the pre-merge boots have been “physical threats.” People weren’t worried about going up against Shirin or Varner in a race; they were worried about Terry and Jeremy…

Jeremy made it rather clear in his pre-game interviews that he wants to keep stronger looking guys around him. He wants to appear smaller. Stephen, on the other hand, has already mentioned in on-air confessionals that he is planning on cutting Joe at the merge. This isn’t the merge (no way), but if Joe ends up coming to Bayon and Stephen and Jeremy have the numbers, they could absolutely take him out. Jeremy would be less-than-pumped about taking out one of the few who are more physically intimidating than him for his strategy. “Setting the tenor for the whole season” for Stephen means making this game about numbers and loyalty far above strength and camp work. The theme of “new school” vs. “old school” keeps popping up; this would be pretty damn new school.

This was a stressful write-up mostly surrounding a rather mysterious moment in a preview trailer. If I get any of this right, that’s great. That said; I’m not expecting success this week!

1. Woo is pulled from the game for some cheating-related incident.

3. Joe and Stephen are on the chopping block. Joe because Stephen is plotting to eliminate him. Stephen’s plotting may end up negatively affecting him if Jeremy really wants to keep someone like Joe around. He could rally troops against Mr. Fishbach.

9 responses to “Next Time On… Survivor: Cambodia Episode 6”