Pop! Goes The Weasel or How To Steal Stuff and Alienate People.

Over Survivor’s fifteen years on the air, a number of contestants have been compared to various animals. Everybody remembers Sue Hawk (not part of the animal analogy) and her infamous jury speech at the Final Tribal Council in Survivor: Borneo when she compared finalists Kelly Wiglesworth and Richard Hatch to the rat and the snake. Then, of course, there is the long history of the Survivor goat. Most recently, Survivor: Worlds Apart contestant and monkey-enthusiast Shirin Oskooi compared finalist Will Sims II to a dead fish. But a weasel? It takes a special kind of person to be compared to a weasel. 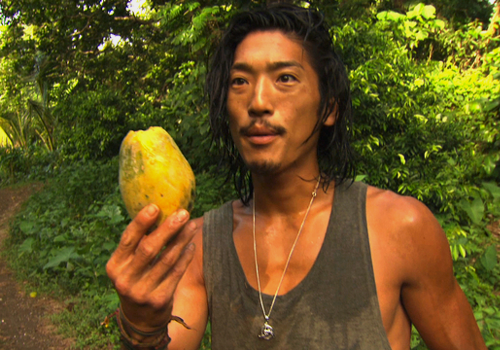 Weasels are fast, they can climb, and they are very sly. You could say that weasels are the ninjas of the animal kingdom. But they have always had a bad rap. Native Americans considered the weasel bad luck and crossing one meant a “speedy death.” In popular culture, the term weasel is often used to describe someone that is sneaky and conniving. With that said, you can see why the term weasel may be used in the context of Survivor.

But why was it applied to Woo? Why not Tony? The man who spent the majority of the season sneaking around in his spy-shacks and openly deceiving his fellow tribe-mates. Or what about Kass? The woman that back-stabbed her allies and gave up secrets. Oh no, of course, talking to people and revealing secrets is an entirely different animal.

Why Woo? The man that prided himself on his martial art values of honor, loyalty, and integrity. Well, this is the exact reason why the whole Weasel Woo debate has raged on ever since Survivor: Cagayan because nobody knows the actual origin of the nickname apart from those who were out there on the island. Until now. 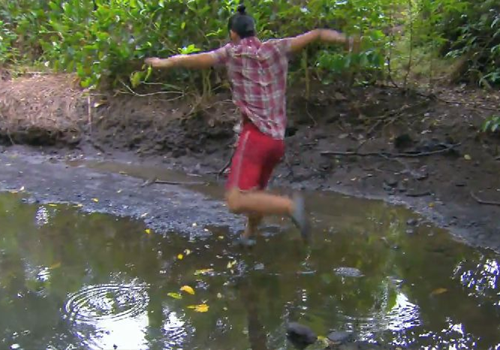 You only have to type the words “survivor weasel” into Google to find a whole host of discussion topics and interviews regarding the mystery of Weasel Woo. While Woo was referred to as a weasel on the show at least a couple of times, by Spencer and Tony specifically, it was after the show when the nickname and the mystery behind it started to pick up steam. But nobody would give a straight answer. It seemed like every contestant had a different reason for why Woo earned the moniker Weasel Woo. Something didn’t quite add up, and the Survivor fan-base soon cottoned on to it. We all knew there was more to the story than we were being told.

“Woo has earned the nickname in our tribe to be “Weasel Woo.” He was kind of like the little weasel who’s running around, doing whatever Tony would say and instigating things to get whatever Tony’s plan wanted. And Woo didn’t have a lot of respect as well.” – Jefra Bland, Reality TV World interview.

Okay. So according to Jefra, Woo earned the Weasel nickname because he’d run around doing Tony’s bidding. I guess I could kind of buy that if it ended there. But the last part of her answer is the most revealing.

“And Woo didn’t have a lot of respect as well” – what is that supposed to mean? The man that prides himself on honor and integrity didn’t have respect? There must have been a deeper reason behind this statement beyond Woo being Tony’s puppet. From the moment Jefra said this you could tell that the Weasel name spawned more from the lack of respect thing than it ever did the Tony thing.

Tony himself has claimed that he coined the Weasel Woo name early on in the game because of Woo’s back and forth dealing with himself and Cliff Robinson. This is very likely true, as we hear Tony refer to Woo as Weasel Woo in the very first episode of Survivor: Cagayan. But just because Tony coined the name doesn’t mean that is why everyone else was referring to Woo as a Weasel. The name caught on after a separate incident, and that became apparent when Trish started giving post-season interviews.

“Woo’s a really nice guy, but I never trusted him. I always thought he’s a bit of a weasel. He had done some things at the beginning of the game that led him to be very untrustworthy that they didn’t show on camera. There are certain things that I really just can’t talk about that would give you an example, but I can’t because it’s behind-the-scenes and I’m not allowed to, but there were things that happened that I can’t discuss that led me to believe that he was very untrustworthy.” – Trish Hegarty, Hitfix interview.

Now we’re getting somewhere. Trish revealed that something happened off camera that led to them viewing Woo as untrustworthy. This is when the Weasel Woo scandal took on a life of its own because now it had all the ingredients of a grand conspiracy – a code name, a cover-up, and confidential secrets. The Survivor rumor mill went into overdrive. It was then further fueled by other Survivor: Cagayan contestants.

When Spencer was asked about the Weasel Woo saga in his Reddit AMA he answered as follows:

“There’s a lot to it, but at one point when Sarah explained some of it to us on the island she got yelled at, so I don’t think it’s something the show would want me discussing. I’ll just say that Woo wasn’t nearly as well-liked as he was portrayed to be, and for pretty good reason.” – Spencer Bledsoe, Reddit AMA. 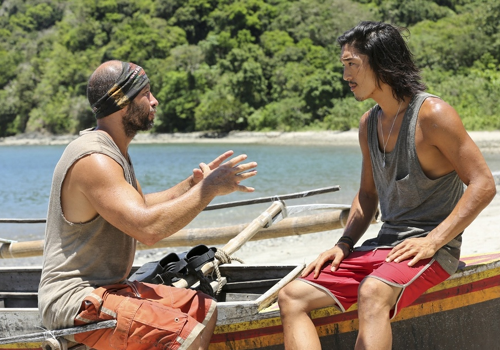 It became evident that the Cagayan collective wasn’t going to open up about it. Obviously, something happened that was a breach of the rules and production didn’t want the contestants talking about it publicly. And what happens when fans don’t get answers? Well, they just make stuff up.

There is a whole range of weird and wonderful theories and explanations for the Weasel Woo nickname out there on the internet. From him stealing food from production to spying on people going to the bathroom or my favorite, that he was sneakily watching the other contestants’ confessionals. Well, as fun as some of the fan theories are, the actual answer is the most obvious, and unfortunately the most mundane.

In the very early days of the season, the Cagayan beaches were hit with some terrible hurricanes. The rain was torrential. If you watch Episode 3 in particular, you can see just how devastating the weather was. The Brawn tribe didn’t have a tarp. Tony and Sarah desperately tried to fix the shelter to provide cover, but it did very little to alleviate the downpour. Impossible to keep a fire going, the Brawn tribe-members were soaking wet, freezing cold, and starving; unable to boil water or cook food.

Well, all of them except for Woo. During one of the worst storms, Woo had allegedly disappeared from camp and managed to sneak into an unoccupied production tent where he was able to drink water and eat snacks, all while keeping completely dry. Not only was this blatantly cheating but he supposedly didn’t even attempt to share any of the loot with his tribemates.

Woo probably crossed something similar to this. EW writer Dalton Ross took this photo from the location of Survivor: Cambodia.

The only problem for Woo was that his fellow castaways found out. It is unclear whether a tribe member discovered where he was, or whether they somehow found out through production. Either way, Woo was rumbled.

But it wasn’t just that big one-off incident that earned Woo his Weasel nickname. Woo continued his weasely behavior. Once, a camera operator accidentally left his Camelback (a hands-free hydration system that contains water) on the beach unattended, and Woo allegedly stole it and drank the entire contents. He would also take extra food at camp.

According to sources, all of this behavior that occurred early on in the Brawn tribe is where the Weasel Woo nickname originated. His clear breach of the rules by trespassing into the production camp and stealing food and drink was the big incident that made him untrustworthy to his fellow contestants.

It also goes a long way in explaining the jury’s attitude towards Woo in the Final 2. Woo didn’t lose just because he was viewed as Tony’s lap-dog, but because Woo also didn’t have the respect of his peers and most of that stemmed from this incident. It’s why Jefra said he didn’t have a lot of respect, it’s why Trish said he was untrustworthy, it’s why Spencer said he wasn’t as well-liked as he was portrayed – and it’s ultimately, why he was called Weasel Woo.

This information was gleaned from various sources, and while there is no way to verify the truth of it, this is the alleged story of Weasel Woo.

20 responses to “The Mystery of Weasel Woo”