Survivor: Cambodia – Second Chance wrapped up filming on July 8 and the cast returned home to the US on July 9. While the season doesn’t begin airing on CBS until September 23, Inside Survivor can exclusively reveal the Survivor Second Chance tribe colors and tribe names. These are the colors of the tribe buffs and they match up to the color scheme of the season’s logo.

Tribe 1 will wear a pink/magenta color scheme. The name of the tribe is Bayon, which is a Khmer temple at Angkor in Cambodia.

Tribe 2 will wear a green/turquoise color scheme. The name of the tribe is Ta Keo, which is another Khmer temple at Angkor in Cambodia, possibly the first to be built entirely of sandstone.

UPDATE: Thanks to Survivor Sucks forum member futurecontestnat for discovering a picture of the Ta Keo tribe buff: 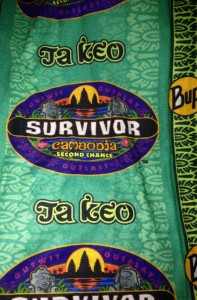 Filming for Survivor: Cambodia – Second Chance took place on Koh Rong island between May-July and the conditions have been described as brutal. Check out our Survivor Second Chance interviews here and Second Chance Cast Retrospectives.