Filming for Survivor: Cambodia – Second Chance started on May 31, the same date that Survivor originally debuted on US television 15 years ago, and it seems this won’t be the only nod of recognition to the first season. In a recent interview with Entertainment Weekly, host Jeff Probst revealed: “…we have this great opening plan where we’re going to do something we did the first season, and you’re going to see chaos and scrambling out of the gate.” 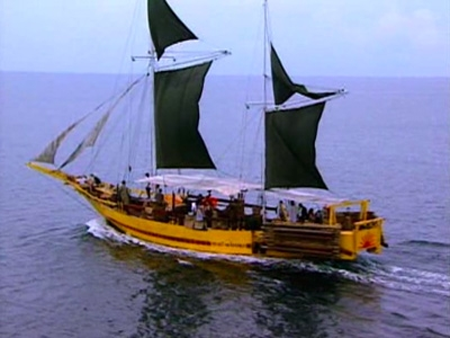 For those unfamiliar with the first season and how it opened, the 16 castaways were taken to a remote fishing village where they boarded a small boat. Once in the middle of the ocean, the castaways were instructed to salvage as many supplies as possible from the boat, before jumping overboard onto wooden rafts. They then had to paddle to shore to begin their 39-day adventure on the deserted island of Pulau Tiga off the Malaysian coast of Borneo. This event and the episode title itself is known as The Marooning.

The last time Survivor featured an opening like this was Season 25 in the Philippines – similar to Borneo the 18 castaways were instructed to salvage supplies from a fishing boat before paddling rafts to shore. In the second part of Jeff Probst’s interview with Entertainment Weekly, he revealed that “…we sent them [the castaways] on this huge journey though old, historic parts of Cambodia…”, which brings to mind the opening to Survivor: China. In China, the castaways arrived on location, with luggage in tow, and visited local points of interest and observed some of the country’s traditions and culture before beginning the game. This suggests that Survivor Second Chance will begin with the castaways visiting cultural landmarks of Cambodia before being taken to a local fishing village, where they will board a boat, set sail, and then be marooned.

Survivor: Cambodia – Second Chance is currently filming on Koh Rong Island in Cambodia, and will air on CBS this fall on September 23. You can check out our Second Chance Retrospectives for each of the castaways here.

Buy Survivor: Borneo on DVD and watch how the original marooning happened:

6 responses to “Survivor Second Chance To Start With Borneo Tribute”