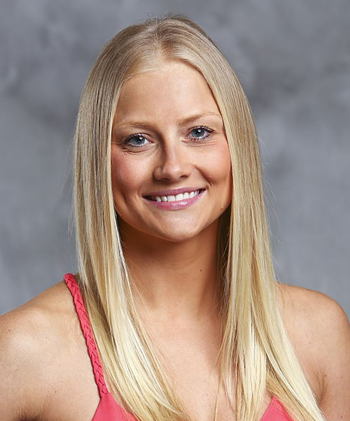 What happened in her previous season: Ever since it was first introduced in Survivor: Africa, the tribe switch has caused the downfall of many potentially great Survivor players. Lindsey and Silas were the two original Survivor players to pay the price, but with those two it could be argued their attitudes and the poor social game was always going to come back to bite them. Kelley Wentworth was in a very strong position pre-tribe-switch in Survivor: San Juan Del Sur; she was in the majority alliance with close ties to both Jeremy and eventual winner Natalie. Kelley entered this Blood vs. Water themed season with her father Dale and was originally placed on the Hunahpu tribe. She quickly formed an alliance with Jeremy, and by extension Natalie. Hunahpu enjoyed early challenge success and avoided Tribal Council for the first nine days.

On Day 10, tribe-member Drew came up with a plan to throw the Immunity challenge to vote out Kelley. Drew’s vendetta against Kelley seemingly came out of nowhere. He claimed that she was the biggest threat because she was a superfan who knew too much about the game and was forming an all girl alliance. Drew openly campaigned against Kelley, even as she was standing right beside him. Drew’s paranoia became a self-fulfilling prophecy because his accusations actually led Kelley to join forces with the girls to vote out Drew at that night’s Tribal Council.

With Drew gone, Kelley had solidified her spot on the tribe and her alliance with Jeremy and Natalie. But the next day came the tribe switch and Kelley ended up on the new Coyopa tribe with her father, Dale. Kelley was now without her closest allies and had to play peace-keeper between the bickering Dale and Missy. Couple Jaclyn and Jon were the swing votes, and while Kelley tried to persuade them to join her and her dad to vote out Baylor, Jaclyn and Jon ended up siding with Baylor and Missy to vote out Kelley. It is easy to place the blame on Dale for Kelley’s downfall, and while his rivalry with Baylor and Missy certainly didn’t help, Kelley will be the first to admit that she should have created more social connections on her old tribe, in particular with Jon, to give her more options.

What to expect from her this season: If Jeff Varner had the best Second Chance campaign out of the guys, then Kelley Wentworth certainly had the best campaign out of all the girls. She wanted back on Survivor bad, and she did everything to make it happen – from numerous podcast appearances to tongue-in-cheek spoof campaign videos. I expect Kelley to play hard and smart on her second go around. She is a Survivor superfan, and while that image hurt her in her first season, this time, I think it will play to her advantage.

Expect her to get in another solid alliance very early but this time to keep her options open by socializing with all of her tribemates. She will have watched all of these people play, and as a superfan, I can imagine Kelley being open to playing with old school players such as Jeff Varner and the like. Her connection to RHAP (Rob Has A Podcast) also means she has potential allies in Spencer and Stephen, and even other big superfans like Shirin. Her early pre-merge exit will also make her less of a threat. She didn’t get to show a great deal of her strategic potential last time and therefore people won’t have any big reasons to target her. Unlike say, Ciera or Kass who made it very deep and made unpredictable moves. Kelley should be seen as a loyal alliance member and trustworthy.

The only real danger for Kelley is if there is a movement against the unsuspecting female players. As the last two previous all returnee seasons have proven, it is the woman that people don’t see as a threat that ends up winning. Nobody saw Amber as a strategic threat going into All Stars due to her quiet, understated game in The Australian Outback. And despite winning Pearl Islands, nobody expected Sandra, the middle-aged mother, to be a threat to their game. With Second Chance being full of smart, aware superfans, they could take this knowledge into account and take out the likes of Kelley and Monica early.

I don’t think this will happen because even if it sounds reasonable on paper, once out there and the likes of Joe and Savage are dominating challenges, or Spencer and Stephen are sneaking off into the woods,  people like Kelley will not be on the top of anyone’s list. This is where Kelley should be able to flourish. Once she is in a solid alliance, with options on the side, she should be able to make it to the merge. If she does I expect we’ll get to see the Kelley that was deprived us of last time – an assertive, cunning, and strategically focused Kelley Wentworth (with even more perfectly appropriate “bitch-faces”).

Prediction: Unless for some reason all the big threats get together and decide to take out the unassuming female players early, then I think Kelley has a great chance at making it deep. She has potential allies going in with her former SJDS cast-mates Jeremy and Keith, but even on a tribe without them, I think Kelley should be able to make friendships and allies fast. She is likable, approachable and dependable. People will want her as an ally because they’ll be under the impression they can trust her. I wouldn’t be surprised if Kelley played up to this image, and then at the merge, we could see a Parvati in Micronesia style ruthlessness come out.

There is no reason why Kelley can’t make a deep run in Cambodia. Inside Survivor predicts, Kelley will form a solid early alliance. But this time she’ll have alliances within that alliance, plus people she can use later down the line, and that should take her deep; perhaps as deep as the Final Tribal Council and a million dollar cheque.

Thanks for reading our Survivor Second Chance Retrospective for Kelley Wentworth.

What do you think Kelley’s chances are next season? Leave your comments below.