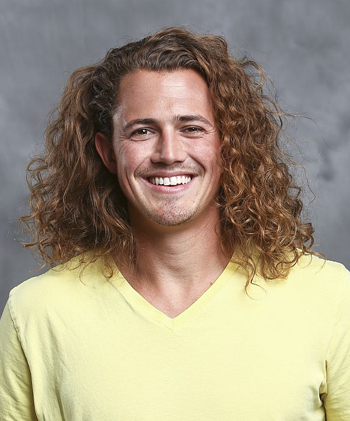 What happened in his previous season: Joe Anglim started Survivor: Worlds Apart on the Nagarote tribe – also known as the No Collar tribe. He quickly bonded with the two young girls on the tribe, Hali, and Jenn. His handi-work and shelter building skills put him in the role as de factor tribe leader very early on. Fellow tribemate Vince grew resentful of Joe’s position in the tribe and particularly his growing relationship with Jenn.

The Nagarote tribe was split down the middle with the three young people, Joe, Hali and Jenn on one side, and the three older people, Nina, Vince and Will on the other. The No Collars lost the second Immunity challenge, and it led to a chaotic Tribal Council. Joe came up with the unnecessary idea of splitting the vote between Nina and Vince in case either of them had an idol. If it wasn’t for Nina accidentally letting slip that Vince was questioning Will’s challenge strength then it was very likely Jenn would have been voted out, but instead, Will switched his vote, and Vince was eliminated. After losing the third Immunity challenge, the No Collars booted Nina under the guise of keeping the tribe strong.

At the tribe switch, Joe ended up as the lone Nagarote member on the new Escameca tribe. He temporarily aligned with the Blue Collar trio of Dan, Mike, and Sierra to vote out the untrustworthy Joaquin, who Mike believed was getting too close to fellow Blue Collar Rodney. This saw Joe through to the merge where he was reacquainted with his old No Collar allies, Hali and Jenn.

He immediately became a target at the merge due to his challenge strength but was able to avoid getting votes due to winning the first two post-merge Immunity challenges. However, he was unable to keep the streak alive and lost the final ten Immunity challenge. Joe showed some out of the box thinking when he created an impressive looking fake idol and used it to try and sway Mike’s vote. Alas, the plan didn’t work, and Joe was voted out becoming the second member of the jury.

Joe’s strengths can just as easily be his weaknesses. Depending on who is on his tribe will determine whether or not Joe will be long for this game. He will be fresh in everybody’s minds, and if they fear him going on an Immunity run down the line, then they may just choose to take him out at the first opportunity they get. But with the early portion of the game being so focused on tribal challenges, it would be unwise to take out someone who will be a tremendous asset in that area.

Unlike some other big targets on this season, I don’t expect Joe to play down his strengths. I think he will come into this season wanting to play like Mike, unaware that Mike’s win was an exception to the rule, not the standard. He will want to lead an alliance in a forceful and charismatic way, and he will break his neck trying to win challenges for his tribe. But I’m not sure Joe has the charisma of Mike, nor does he have the ability to think through his strategic decisions.

Joe made a few errors in Survivor: Worlds Apart: splitting the vote, sitting Nina out of an Immunity challenge, and incorrectly using a fake idol. I think if more time had passed between seasons then Joe would have had a better chance to understand where his game went wrong, but playing back-to-back I fear Joe is going to fall into the same traps. He really needs to focus more on connecting with people socially and making other people look like threats. There will be lots of people not wanting to face him at the merge, and that is what Joe needs to work a way around.

Prediction: Joe is likable and great in challenges. Those two things alone should keep him safe for a little while because he’ll be needed for tribe success. But I think unless he connects with enough people then he will struggle to make the merge. He needs more than a Hali and a Jenn this time around – he needs numbers. If he thinks he can come onto the season and bust through the competition Mike Holloway style then, unfortunately, he’s going to have a rude awakening. Inside Survivor predicts that Joe will be booted just before the merge.

Thanks for reading our Survivor Second Chance Retrospective for Joe Anglim.

What do you think of Joe’s chances next season? Leave your comments below.