Monica Padilla was the first person from the original Bayon tribe to be voted out of the game, and by the hands of her own alliance mates. But how did it all go down? Was the edit completely accurate? Was Monica voted out because of an argument about clams and the suggestion of an all girls alliance? Or was there more happening behind the scenes? 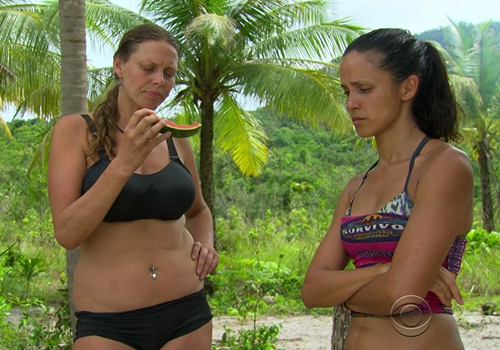 Challenge Throw? – It has been speculated that Bayon threw the immunity challenge. Monica has mentioned this in some of her exit interviews. Even Jeremy seemed to hint at this in a post-episode tweet – which was subsequently retweeted by Stephen. It could explain Jeremy choosing to sit out of the challenge, and also Stephen’s epic blunder when he hit the Angkor tribe’s target.

Between the lack of interviews and the implication the challenge might have been thrown, there are reasonable grounds to believe that Monica might have been set-up to be voted out. Obviously, the ultimate decision is in the hands of the castaways playing the game, but a little bit of a push in the right direction has been a part of Survivor since season one.

Girls Alliance – in the edited episode, the sequence of events showed Monica approaching Kimmi about a potential girls alliance after the immunity challenge. It was this conversation that triggered Kimmi into action and set in motion the events that led to Monica’s elimination. But did this conversation really take place post-challenge? Apparently, this talk happened the day before, and the discussions to vote out Monica had been held before the challenge.

Clams – was the ocean really depleted? Well, there was definitely fewer food sources in the sea due to Season 32 having filmed in the same location just weeks before and apparently production had to replenish it.

4 responses to “Survivor: Cambodia Episode 5 – What You Didn’t See”