Casual Corner will provide a round-up of the best (and by best, we mean worst) comments from the Survivor Facebook page, the mecca for hilarious comments. Stay tuned every week to see how hardcore casuals cope with losing their favorite castaway, gripe about challenges, and oh, so much more.

“Listening to you talk literally made me want to kill myself.”
-Eliza Orlins, describing my brain after reading Survivor’s Facebook page.

After another week of scouring through hundreds of comments on Survivor’s official Facebook page, I’m flat-out mentally exhausted. This week, casuals from everywhere chimed in with their thoughts on everything under the sun… and even managed to talk about Survivor every once in a while. Frankly, no one really cared about the Summit. Everyone seemed only to care about Ken, dream casts, and complaining about anything no matter how thinly related to the episode. Sadly, no one had anything of worth to say regarding the whole “You vs. U” debate.

Let’s be real. Hannah talking to Zeke/Adam was far more painful than any comment I could find. Incredibly awkward. I am, however, intrigued as to who Anna Marie is. Probably Abi, but hey, who’s to say that Anna Marie isn’t going to be on next season and have a Final 2 deal with Coconut the cat. 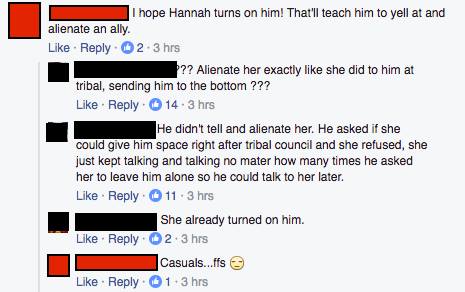 The best part of this one is that this casual is so delusional that they actually start making fun of themselves.

Over at Gen X, Ken “Don’t call me Ken Doll” McNickle was fawned over by casuals everywhere.

If this casual thinks that catching food is how you align with people, they must’ve missed seasons 2-32. I’m more scared as to what grammar school taught this casual that once you use a comma, you can just abbreviate everything and forget how to spell. Clearly, I’m on “Team You.”

I don’t even care to comment on Ken here. Did I miss something during the first immunity challenge? Rachel took far too long destroying that tiki to be considered strong or physically fit. Plus, HAVE YOU SEEN LUCY?! SHE’S A FREAKING BODYBUILDER!

This isn’t sarcasm. This person is literally now just learning that Lucy exists. Can’t say I blame them…

Those who live in glass houses… you know the rest.

It baffles me that anyone saw Paul as the best player.

Frankly, this week was littered with utterly random comments. I’m far too excited to beat around the bush. We’re just going right into the lightning round.

Man, I gotta get this person to write episode recaps. It’d be done in like 10 seconds.

This is exactly what I want to read when I go to the Survivor Facebook page… the Trials and Tribulations of a Kodak Employee. Stay tuned for next week when we learn how to turn the flash on.

Things apparently got heated. Or kinky. I’m not quite sure.

Every-WHAT?!?!?!? The people want to know. And I have a hunch that the sand is one of their lesser worries.

I did think about it…and this is how I feel.

Far too much Joe-ga would be necessary to achieve this amount of kumbaya.

I have mental whiplash after all of this going back and forth. Also, thanks for taking the time to remind me how “ocean” is spelled out.

Looks like someone woke up on the wrong side of the Probst-bed this morning. Either that or this is Jonny Fairplay’s dummy account.

I’m going to start using this insult in everyday life when I disagree with someone.

Ah, these casuals are the kind that inspired this feature. It takes a special kind of person to believe that any season with Redemption Island was actually palatable. I can’t wait for the final season of Survivor, where it’s literally just players like Joe, Spencer, Rob, Ozzy, and Rupert, Redemption Island, and a guaranteed million dollars just for playing.

Ah, thanks for clearing that up. I was wondering which show I was watching 33 seasons later.

You joke now, but I can’t wait for the Crystal Cox inspired, Blazing Speed vs. Brains vs. Beauty season.

Yes, Taiji is the spot of massively controversial Japanese hunts. Unfortunately for this casual, Taiji is not the same thing as Fiji. Survivor has never been in Japan. Just like Taylor’s ‘love goggles,’ this casual put on their set of political activist goggles and went reeeeeeeeeally far down the rabbit hole (or blow hole).

And now, without further ado, (drum roll) my favorite comment of the week!

This one is just comedically brilliant for all the wrong reasons. First, ALL CAPS. It just shows you how passionate they are. Second, they really love mud in case you couldn’t tell. Third, how on God’s green Earth did they see anything regarding mud in the last episode? Fourth, they love punctuation and arrows. Finally (not because I can’t keep going), they actually think that they are contacting the challenge department and have something worth saying.

Let’s be real though, without nutjobs like this, I’d have nothing to write about.

With that, we wait for Episode 4’s comments. Brace yourself for the emergence of Lucy.