Each week, Christine Pallon and Gia Worthy will round up the previous week of Survivor 41 as they list their top moments in various important categories. This includes the most essential information, the stand-out castaways, and the key moments from the week.

Here, Christine and Gia break down all the action from the final episode.

Christine: Ricard may have left in fifth place, but he certainly didn’t leave the game quietly. After Erika narrowly defeated him in the immunity challenge thanks to her advantage, Ricard put all his hope in his ally Xander to save himself. In an emotional moment, Ricard revealed he had a baby due just a week after the game, and Xander offered the Yase idol to save him.

At Tribal, Ricard reflected on his successes in the game ,and Jeff reminded him that many of Survivor’s greatest players never make it to the end. Ricard ultimately joined the ranks of “major players voted out just before the end” when Xander did not play his idol for him, sending him to the jury.

Gia: I know that I am not alone in my dislike of the final four fire-making twist. The sooner this twist is done away with, the better for Survivor overall. Nonetheless, I will (begrudgingly) admit that this is probably the best version of this twist that we’ve gotten since its inception in Heroes vs. Healers vs. Hustlers. After Xander won the final four immunity, he had all of the power to decide who competed in the fire-making duel. Due to some poor judgment calls regarding who the jury was rooting for, he decided to take Erika, leaving Deshawn and Heather to face off.

This resulted in a shockingly riveting competition between the two, with its conclusion being a nailbiter. In the end, Deshawn was able to prove himself and came out on top, while Heather became the final juror. Watching these two have their moments to shine in this way made for a compelling end to the season. Still, if this is the best we can get from this controversial twist, we’re all better off ending on a high note and doing away with it for good. 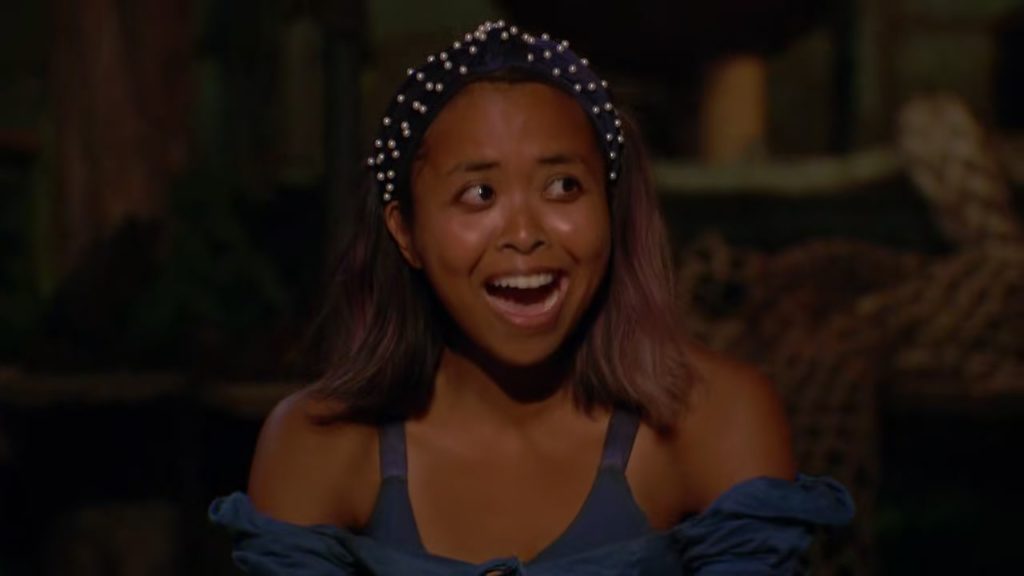 Gia: The finale previews, and even Jeff himself, had been hinting at one last big twist that still awaited us. Naturally, I was preparing for the worst. Perhaps final five fire-making too? Actually, let’s not give them any ideas. Luckily, the much-anticipated twist ended up being inconsequential to the season’s outcome. In step with the unofficial tagline of “Drop the 4, Keep the 1,” Survivor paid homage to the very first season by announcing the winner at the final tribal council instead of the live reunion.

The vote reveal itself wasn’t anything particularly suspenseful, given that Erika swept the competition in a 7-1-0 vote. And while this decision was more so related to the pandemic than any desire to reminisce about the debut season, it didn’t cheapen the importance of Erika’s historic win. The winner reveal was followed by a wrap-up with the jury and finalists, giving us a more intimate feel than we usually get with live reunions. Still, my preference is with the live reunions when it is safe to do so, especially since it was clear that Deshawn and Xander were not given enough time to process their losses.

Christine: Ricard was always going to have to rely on winning immunities in the endgame to make it to the end, so once he lost the first immunity challenge, it was clear that his time was most likely up. He ultimately became too big of a threat before the end: he had multiple challenge wins, big moves, and a good underdog story as the last Ua member standing. Ricard ended up being one of this season’s breakout stars and feels like an inevitable lock for an eventual returnee season alongside his Ua ally Shan, so I doubt this is the last we’ll see of our villainous flight attendant.

Gia: To be perfectly honest, Heather’s chances of winning the game were nonexistent based on her edit alone. It is always disappointing to see that production is continuing to under edit their female castaways because having the second highest-placing woman of the season receive so little airtime makes for a less dynamic story overall. This is an issue that many Survivor seasons have, and it’s a problem they really need to amend.

As for Heather, it really is a shame that we didn’t get the chance to see more of her because what she did provide was incredibly entertaining. Her secret scene at the beginning of the season, as well as her newly-released Ponderosa video, were both very fun, and the moments we did see on the show were memorable. Heather deserved better in her edit, but I’m glad she went out on a high note with how she held her own in fire-making.

Christine: Xander becomes the latest member of Survivor’s iconic zero-vote finalists club. After being on the messy Yase tribe, losing his vote for most of the pre-merge, and having a huge target on his back for having a very public idol, Xander certainly faced his share of adversities throughout the game. Xander, Tiffany, and Evvie’s flashy move to trick Liana into wasting her Knowledge Is Power advantage was one of the highlights of the season. Still, between that move and the finale, Xander appeared to be less of a major player and more of a passenger in the game.

It’s clear that sometime after the Tiffany boot, the rest of the players stopped seeing Xander as a threat. This allowed him to hold onto his idol for so long, but this perception clearly hurt him with the jury. Perception is everything, so Xander needed a strong Final Tribal performance to win over the jurors. As nice of a guy he is, Xander failed to articulate his game when it mattered the most, and he made some critical mistakes in the endgame (giving Ricard false hope with the idol and taking Erika to the end with him) that further diminished his chances of winning.

Gia: Deshawn’s winning chances were the most difficult to pin down out of all of the remaining finalists. Over the season, we saw him doing a lot, but that didn’t always mean that his choices were the best for his game. He had some incredible highs and some devastating lows. Of all of the contestants, he is probably the one that struggled the most with balancing the personal and strategic.

While he didn’t take home the win, I appreciated Deshawn as a player and character. He had several moments on the show where he was willing to be honest and vulnerable with his cast and the audience, certainly no easy feat in a game for a million dollars. To have this come from a Black man is especially important and opens up possibilities for future players of color. He may not have won, but second place isn’t too bad considering all of the adversities he faced along the way. He survived the Do or Die and fire-making challenge and was the target on several occasions in the early stages of the merge. I hope Deshawn is proud of the game he played because he was a groundbreaking player to follow throughout the season.

Christine: I know I’m not alone when I say that I didn’t think Erika had a chance in hell at winning the game coming into the merge, but that was the fault of the editors more than anything. After a quiet pre-merge on the dominant Luvu (interrupted only by Deshawn and Danny’s failed challenge throw to get her out), Erika turned back time with the hourglass twist at the fake merge to save herself. From then on, Erika managed her threat level well, having enough control and agency to make a winning case for herself at the end without ever becoming the biggest target in the game.

The lack of context for her close partnership with Heather meant that a key part of Erika’s winning game felt underdeveloped, which is frustrating. Despite this, this final episode really saw Erika shine, especially with her strong Final Tribal performance. Erika’s under-the-radar social gameplay may not have been the flashiest game this season, but it was more than enough to secure her the win in a landslide jury vote.

Christine is a writer, musician, and lifelong Survivor nerd based out of Urbana, Illinois. When she’s not playing shows with her bands or working at her day job at a tech company, she spends her free time tweeting about bad horror movies, Kate Bush, and the filmography of Juliette Binoche. Christine writes Inside Survivor’s episode recaps for Survivor US.