Earlier, we revealed the title for the thirty-sixth edition of Survivor – Survivor: Ghost Island. The details regarding what exactly the theme entails remain unclear, but the speculation has already been rife amongst the fan community.

Early guesses include everything from a new game twist similar to Redemption Island to castaways competing against their exes or enemies (ghosts of their past). A reworking of the Outcasts twist from Survivor: Pearl Islands is another popular theory. Others think it may just be a title based on an aesthetic choice, with ghostly themed set designs, props, and challenges.

Here at Inside Survivor, we’re just as clueless as everyone else on how exactly Ghost Island will work, but we have been sent some information in the past couple of hours which may offer some insight. The information is not only relevant to Season 36 but is fascinating in its own right as a look behind the curtain at Survivor creative.

Ghost Island of Survivor Past

After posting the Ghost Island news earlier, a reliable source emailed Inside Survivor a document relating to a potential idea which was on the table for Season 30 back in 2014. In the planning stages, SEG/CBS had come up with various themes for the show’s milestone thirtieth season, one of which was Ghost Island. The document reveals that the season was to include not only a Ghost Island twist but THIRTY returning players divided into three separate tribes.

The notion that Season 30 would consist of returning players is not news in itself, back in 2014, it was strongly rumored there would be a big all-star season to commemorate the monumental occasion. I was in the early days of my Survivor spoiling antics in 2014 but had heard through the grapevine – as had many others – that CBS was putting together a list of potential returning castaways.

Host and executive producer Jeff Probst confirmed that a returnee season was under consideration in an interview with Entertainment Weekly back in 2015. “Leading up to 30, we spent almost a year talking about whether we should do some sort of all-star season with returning players,” Probst told Dalton Ross. “And that seemed to be the conventional wisdom. A lot of people were expecting us to do that. But Mark [Burnett] and I were talking on the phone one day and Mark said something so simple. Mark said, ‘Just keep in mind, Jeff—it is our 30th season, but it is also just our 30th season.”

The all-star season was eventually scrapped in favor of Survivor: Worlds Apart, a season comprised of eighteen brand new castaways divided into tribes of white collar, blue collar, and no collar. However, the document regarding the abandoned all-star concept is continuously compelling in both its ambition and the way it might tie into Season 36.

The Season That Almost Was

The document is formatted as a creative pitch, detailing the theme and the logistics of how it would work. It refers to the cast as “second chance” players “who have only played one time.” The pitch begins: 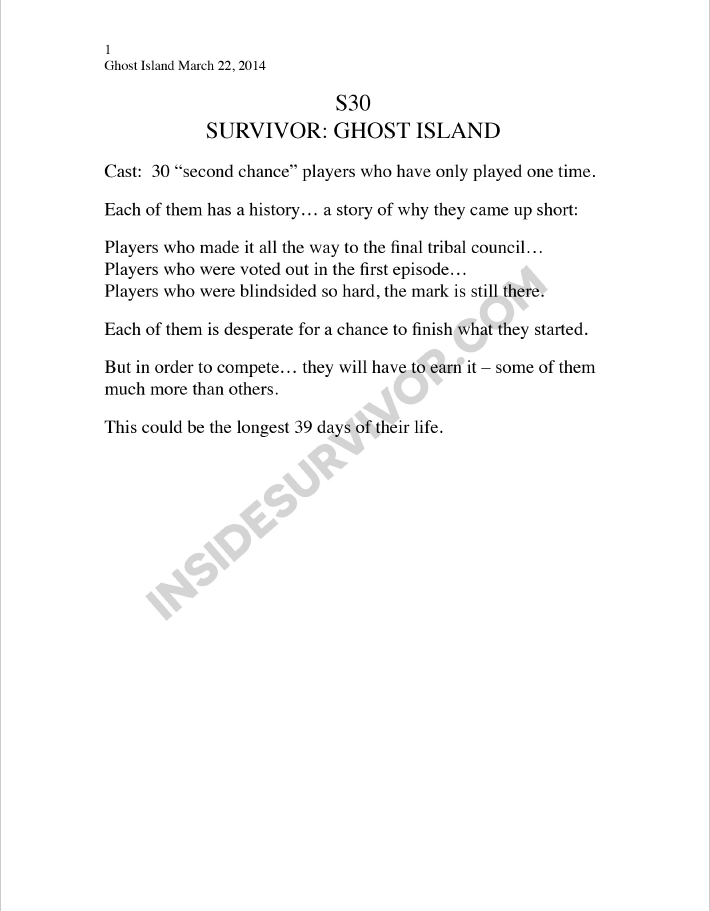 What is intriguing here is the use of the term “second chance.” As we all know, Survivor: Cambodia – Second Chance followed Worlds Apart in the fall of 2015; a season centered entirely around the conceit of former players returning for a second shot at glory. It appears that Second Chance was a reworking of this original Season 30 idea, which becomes clearer in the next part of the document: 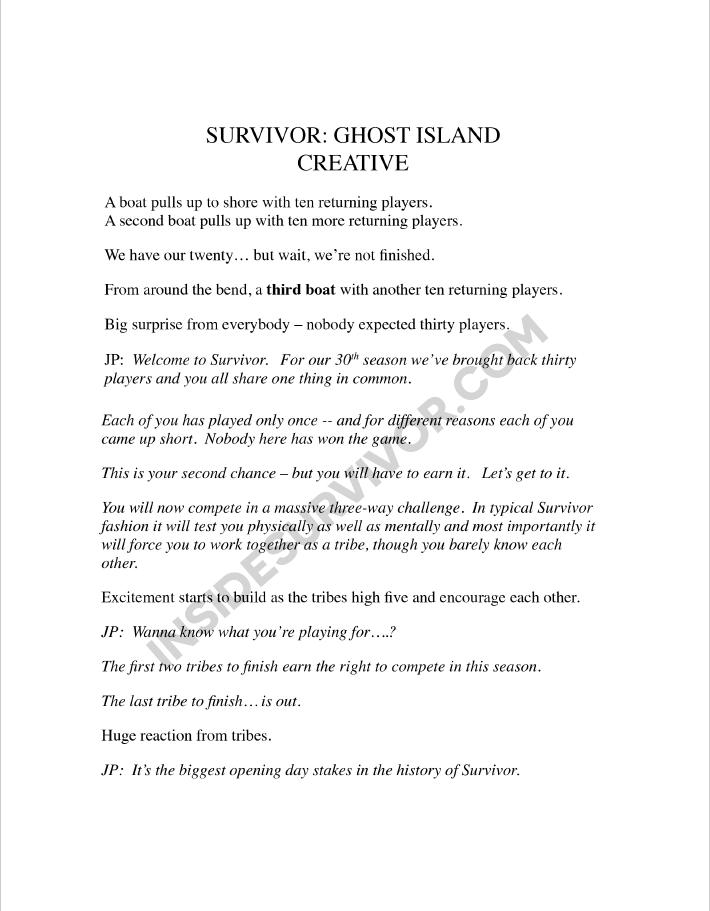 Instead of bringing 30 returning players out to the island, Second Chance included a ballot of 32 former one-time players and let fans vote on which 20 they wanted to see return. Watching the hopeful Second Chancers have their dreams crushed in front of a live television audience was hard to stomach, but the thought of flying them all the way out to location only to eliminate them Wanda and Jonathan style is perhaps even crueler. 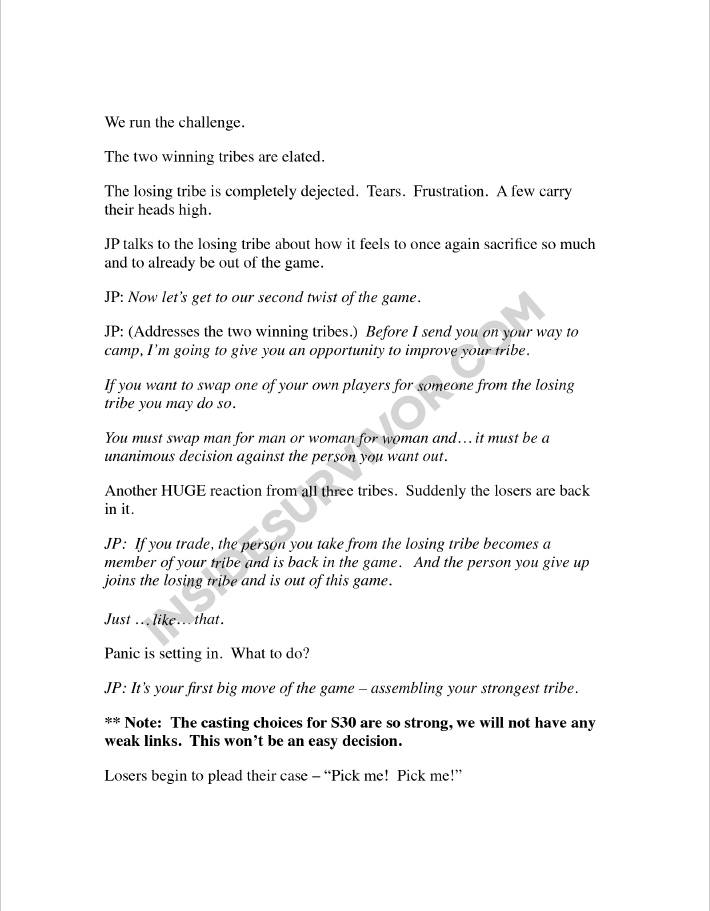 Funny how even fictional pitch Jeff Probst mentions “big moves.” It certainly seems like Season 30 was going to be twist heavy right from the start, and that’s even before the Ghost Island concept is introduced. The “Note” also implies this pitch was sent to CBS executives, assuring them that the casting choices would be of high quality – which is always a questionable claim, especially if the Game Changers cast is anything to go by.

The next section introduces the Ghost Island twist: 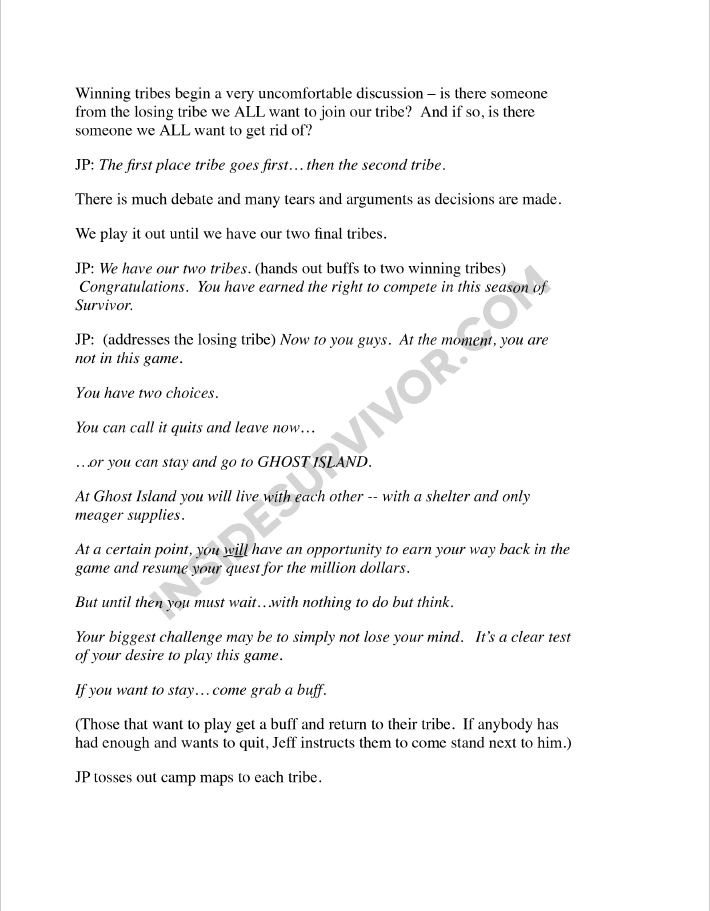 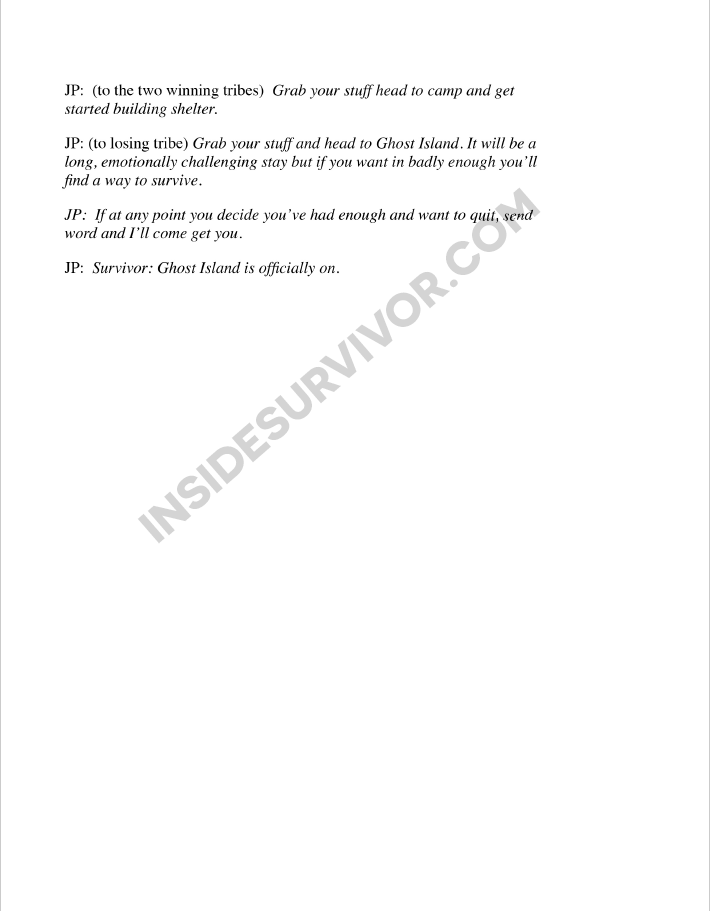 In this original version, Ghost Island was intended to be a separate location, similar to an Exile Island or Redemption Island. According to the twist, the ten players who were eliminated – either by losing the opening challenge or been traded from a winning tribe – would live together on Ghost Island until an opportunity arose to reenter the game. The Ghost Island inhabitants could choose to quit at any point, including right there and then on Day 1.

The following part of the document goes into further detail about how this version of Ghost Island works: 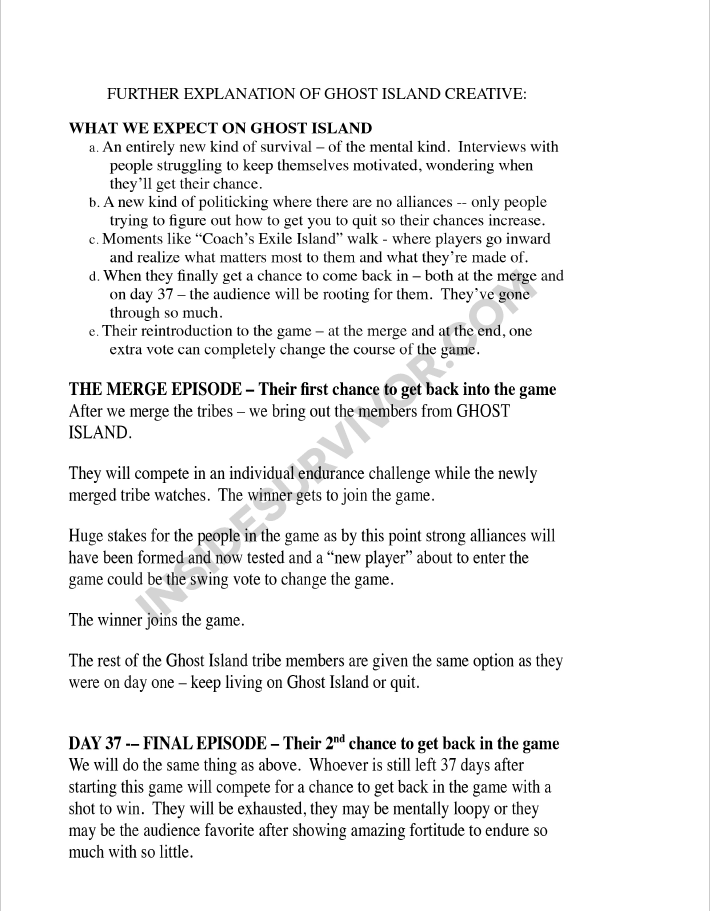 As the document shows, the idea behind Ghost Island seemed to be one that would highlight the mental anguish of the players. Those living on Ghost Island wouldn’t technically be “playing the game,” and therefore the focus would be on their survival and willingness to persevere despite their harsh conditions. It also seems like production anticipated quitters on Ghost Island, and the document even mentions players strategically figuring out how to make others quit. Very Lord of the Flies.

The other element of Ghost Island is similar to Redemption Island, where two players would have a chance to reenter the game, one at the merge and one on Day 37 (it was Day 36 in the Redemption Island seasons). At the merge, those remaining on Ghost Island would compete in an endurance challenge with the winner immediately returning to the game. The same thing would happen on Day 37, in the season’s finale episode.

The document finishes with some extra info on the Ghost Island twist: 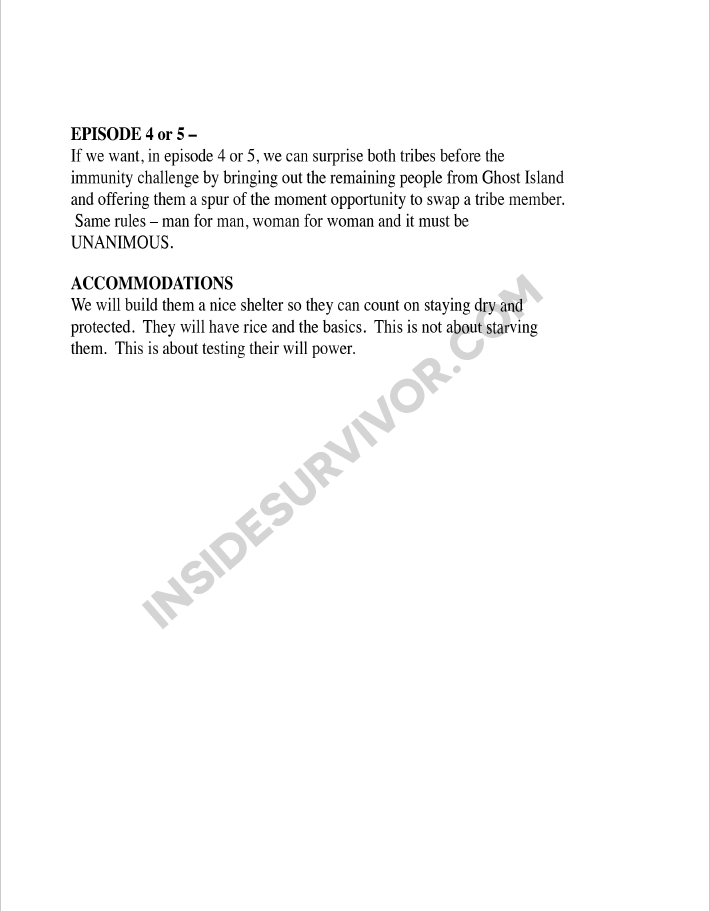 Once again, the document makes it clear that Ghost Island is about “testing their will power” rather than simply watching people starve. What it doesn’t make apparent is whether or not the voted out players join those on Ghost Island or if they are eliminated permanently.

The most important question now is, will Season 36 be using the same Ghost Island concept or has the idea been tweaked over the past three years? We know the season won’t include returning players and I’d be highly surprised if it featured a cast of 30. Perhaps they’ve further combined the idea with Redemption Island, and the eliminated players live together on Ghost Island, and rather than competing in duels every couple of days, they instead just have to survive until they get a shot at returning come the merge and Day 37?

But for all we know they could have come up with a completely new idea for Ghost Island in Season 36. Once again, as soon as we have more information we will update.

What do you think of the abandoned Season 30 theme? Would the season have worked? What are your thoughts on Ghost Island? Let us know in the comments.

33 responses to “Survivor 30 Ghosts: The Returnee Season That Almost Happened”