Worlds are colliding in Sequester’s upcoming Survivor Mini as castaways from around the globe are set to battle it out in the internet’s most unpredictable reality game.

That’s right, as first announced earlier this month, Big Brother veteran and Sequester creator Audrey Middleton is hosting another Survivor version of her popular online series. Once again, twenty former Survivor castaways will switch on their webcams, but this time the cast is made up of players from America, Australia, New Zealand, and South Africa.

We can now officially reveal the twenty players that will be competing in this Saturday’s Survivor Mini: 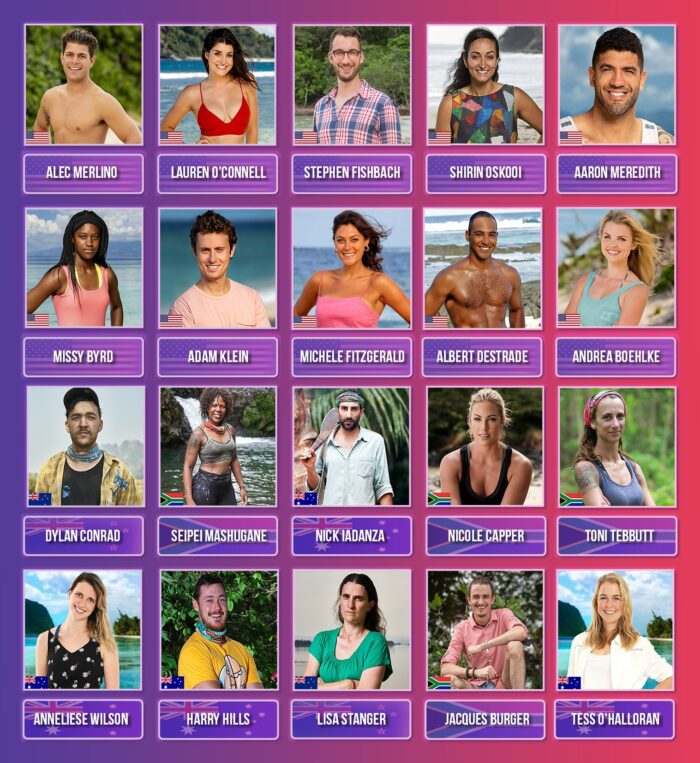 The cast features ten players from Survivor US (five men and five women) and ten international players comprised of Australians (two men and two women), New Zealanders (one man and one woman), and South Africans (three women and one man). Among the group are a handful of winners, a few runners-up, and plenty of non-winners looking to make their mark in what should be an epic international showdown.

You can watch “Survivor Mini 2: Push It To The (Room) Limit” live at sequesteraccess.com this Saturday at 8 pm (EST).

What is Sequester? Sequester is a reality game (existing in both an online format and in-person) created by former Big Brother contestant Audrey Middleton. During the pandemic lockdown, Audrey has been hosting special one-night “Sequester Minis,” such as “RHAP Night” with various podcasters from Rob Has A Podcast, as well as “Big Brother US vs. Big Brother Canada.”

How does Sequester work? There are similarities to Survivor, in the sense that players must vote one another out and can earn immunity in the form of the Locus of Safety (a sort of Hidden Immunity Idol). The difference is, it all takes place virtually via video call. The 20 players begin the game separated into five different chat rooms, each with its own occupancy limit. When a new round begins, players can jump from room to room to strategize, make deals, and form alliances. The twist is, each new round has a different voting format, making the game unpredictable and keeping the players on their toes. The last seven eliminated players make up the jury to determine the overall winner.

Stay tuned to the official Sequester Twitter for all the latest info.

One response to “Sequester Survivor Mini 2 Cast Is Revealed”

The Second Catfish Revealed For The Celebrity Circle