In celebration of Survivor’s 20th anniversary, over the next couple of months, Inside Survivor is publishing a series of articles looking back at the show’s history, best moments, and most memorable characters.

You can’t talk about the evolution of Survivor without talking about the evolution of Jeff Probst. A young, little-known host when he started, Jeff eventually became what is essentially the dimple-cheeked face of Survivor. It’s fascinating to look back at Jeff in those early seasons; he’s more soft-spoken and kinder and doesn’t quite have the confidence of later years. However, as the show grew, so did Jeff, as he took firmer control of proceedings and became more vocal and, at times, sassy as all hell.

Today, I’m looking back at some of Jeff’s most savage putdowns, the moments where he dishes out some top tier insults with all the fixins’. There have been a lot over the years, but here are my top twenty Jeff Probst burns.

Heidi is smart, and she’s not afraid to let you know it. But there is a difference between telling and showing. As far as Jeff is concerned, he didn’t see the proof in The Amazon. “My strongest assets to this group are athletic ability, and intelligence, and, hello, one of those is gone right now,” says Heidi. “Which one?” quips Jeff. That’s not all though, he decides to poke fun again at the reunion, when he reveals that Heidi has one of the highest IQs on the cast. “Why didn’t that intelligence come out on the show?” he asks. Damn, Probst, why don’t you tell us your IQ score?!

There is no real killer line here, but it’s one of the first times we start to see “take-no-crap” Probst come out. Clay gets too fancy with the nicknames on his voting parchment (writing “Goodbye Denver Diva” instead of Ghandia), and Jeff has no idea what it means. “Enough with the nicknames,” he sternly tells Clay, who shrivels up like a scolded schoolchild.

The Worlds Apart cast is ripe for a kicking, and Dan stands out above the rest. There’s a few great Jeff insults hurled Dan’s way, not to mention the barely contained disgust on Jeff’s face when Dan compares being an adopted child to domestic abuse. But the highlight is Dan’s puzzle struggles, and Jeff clearly revels in toying with Dan’s emotions. “DAN IS… WRONG… AGAIN!”

17. Jeff thinks Rupert is the problem (Heroes vs. Villains)

This is another situation where there isn’t one particularly killer insult, it’s just Jeff being completely baffled by what a player is saying and letting loose. Rupert is talking about how the Heroes tribe needs to find a way to work together as a cohesive unit, so that they can avoid coming back to Tribal. But Rupert says he can’t do that because he’s made promises. “Coming to Tribal Council sucks!” Rupert yells as Jeff looks on flabbergasted. “Rupert, you’re part of the problem!” Jeff snaps back.

We all know that Jeff has had a bias in favor of male castaways over the years, but that isn’t the case in One World. Jeff has no issue reminding the men that they suck. He consistently undermines them and insults them. He makes them feel ashamed for taking the easy Immunity win in the first challenge. He points out the ridiculousness of them being the first tribe to give up Immunity and choose to come to Tribal. And he takes every opportunity to mock them during challenges. I think my favorite remark is the simple but accurate, “The men continue to be pathetic in this challenge.” 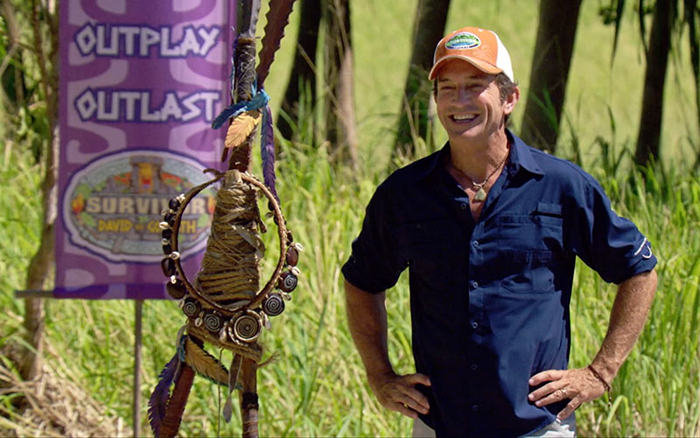 This is a small moment, but it makes me chuckle. Phillip turns up to a challenge with a feather wrapped around his head because he’s Phillip, so course he does. “Phillip, did you have a collision with a hawk?” quips Jeff. Seriously, why hasn’t Jeff being a guest judge on RuPaul’s Drag Race yet?

Another small but very funny Jeff burn comes in Nicaragua when Benry backflips off a puzzle piece after losing an Immunity challenge. “Benry with the ceremonial loser dismount,” says Jeff.  Succinct and to the point.

Some people find Jeff’s incessant challenge commentary insufferable (looking at you Penner), but now and then, he comes out with a doozy (or two). During the blindfold challenge in Cambodia, Jeff is at his best, especially when it comes to Terry, who finds himself lost on the course. “Dietz continues to wait for help, like waiting to get called on in class, but the teacher doesn’t see him,” is good, but the follow up is even better. “Terry, like the guy at a party that no one will talk to, waiting for an invitation to dance.”

There’s a point in Nicaragua where Jeff gets so frustrated with Fabio and the lack of moves that he starts impersonating his own mother to get his point across. “Why don’t those three get together and make a move,” he says in a sort of weird old lady voice. It’s probably the closest Jeff has ever come to directly trying to influence the game. But I guess his defense is, “Hey, that’s what my MOM would say, not me!”

11. Jeff and Colby have a tiff (Heroes vs. Villains)

Heroes vs. Villains sees Colby in a pissy mood for pretty much the entire season, and it doesn’t go unnoticed by Jeff. There’s a great moment when Colby refuses Jeff’s offer of chocolate before a Reward challenge because he just wants to get on with the challenge. “We’ll go when I’m ready, brother,” Jeff claps back. Speaking of brothers, though, the best moment is at the loved ones reward challenge when Colby is yelling at his brother Reid. “Don’t worry, Reid, he’s been like this for 34 days,” Jeff smirks.

Sometimes, those with power abuse it, which is the case in these situations where Jeff uses his authority to play on the castaways’ emotions. The fake merge in Thailand is the first example of this, but that was more of a twist rather than Jeff just being sneaky for the sake of it. The better example is in Heroes vs. Villains when he lures the group into thinking they’re about to merge. “Drop… your… expectations,” he says as the excitement turns to disappointment. Even crueler is in Cambodia when he fakes the group out into thinking there is no loved ones visit.

I told you that Worlds Apart is a goldmine of idiocy, and a great example of that is a word puzzle that stumps both tribes for almost two hours. As the castaways look at their letters dumbfounded, Jeff simply stands off to the side, making fun of them in his deadpan style. “It is as if this is a foreign language being learned for the first time,” he comments. “Start thinking Survivor, it’s been on for 30 seasons. I say the same 200 words over and over and over. I’m in therapy I say the words so often.”

Jeff really gives Abi a hard time throughout Philippines, especially when it comes to challenges. He rips on her for continually sitting out (“How many challenges have you competed in?”), and when her tribe wins Immunity, he basically tells her she doesn’t deserve to hold the idol. “Malcolm should be holding that thing,” he says. But the stand-out moment comes at a post-merge Tribal Council when Jeff is shocked that Abi only just realized she came across as unlikeable. “When everyone is laughing at you, it means they think you’re full of it,” he says. Yikes!

I don’t think there is a tribe in all of Survivor that Jeff has hated more than the Fang tribe in Gabon. The weekly Previously On segments essentially turn into two-minute roasts. “The red tribe was starting to look like one of the worst tribes in Survivor history…” “They voted out one of their best athletes…” “They elected a tribe leader who quit the next day…” “They finally did something completely out of character; they made a unanimous decision.” Absolutely brutal.

Now, this moment is just cruel but becomes funny because it’s so audacious. At the reunion, Jeff brings up how Amanda is one of a handful of players to make it to Final Tribal Council twice, but that she hasn’t been able to transfer that into a win. He wonders if it’s a lack of killer instinct. Okay, so far, nothing too out of the ordinary. Then he turns it up a notch by moving from the game to real life. “Is that something that haunts you in life?” he asks. Whoa! The shocked gasps from Amanda and the rest of the cast are hilarious. Then, Jeff tries to backtrack but makes it worse by saying, “that’s what everyone on the street tells me.” I’m surprised he didn’t claim it’s what his mom thinks. 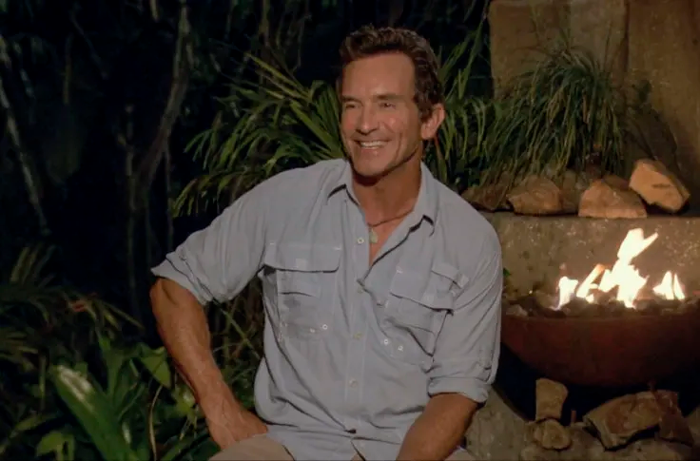 Jeff loves poking fun at Coach, especially in Tocantins. There’s the whole bit where Coach is talking about his warrior mentality and wanting to go against the best, to which Jeff politely reminds him that he voted out Brendan at the last Tribal. But my favorite part is when Coach claims that he doesn’t call himself a “warrior,” it was a name bestowed on him by others. “Let me guess, some chief in a small village?” Jeff says with all the sarcasm he can muster.

3. Jeff has no time for quitters (Pearl Islands, Nicaragua, Blood vs. Water)

Jeff has a special place in Survivor hell reserved for people who quit. It goes back to Pearl Islands when Osten basically asks to be voted out by his tribe. “Per your wishes, go home,” says a less-than-amused Jeff, who then throws Osten’s torch on the ground. He is even more disgusted with NaOnka and Purple Kelly in Nicaragua. He calls them quitters to their face and tells them their torches will remain behind as a reminder of their choice.

Then there’s Colton, who Jeff unloads on in Blood vs. Water after Colton decides to call it quits just days into the game. “I’m now convinced Colton is the guy that never should have got up off the couch, we brought a quitter back, and we got a quit again.”

When it comes to reunion show burns, Samoa is a great one. Russell is whining and talking about how he deserves the title and how he doesn’t regret how he played the game. You know, the usual Russell schtick? Then Jeff comes in with the perfect ego buster, throwing Russell’s own words back in his face. “Well, leave it to me to say, one of those ‘dumbass girls’ beat your ass.”

To be honest, I could have put this one in the Greatest Rivalries category. There is a genuine tension between Jeff and Fairplay whenever they interact. But the beef also makes for some killer burns. There are many examples in Pearl Islands, with Jeff mocking Fairplay’s hand gestures and asking if he’s “loaded” at Tribal. There’s also his sly dig as he brings the final three their reward meal: “Jon in bed with two women, a first.”

But it’s the opening moments of Micronesia that sees Jeff at his asshole-ishness best. Fairplay rocks up in a blue shirt and khakis, looking like he’s doing Jeff Probst cosplay, and, of course, Jeff can’t resist a jibe. “I’m impressed that you have aspirations to get out of your current place in life,” says Jeff, a burn laced with real venom.

Stay tuned to Inside Survivor for more 20 Years of Survivor content over the coming weeks.