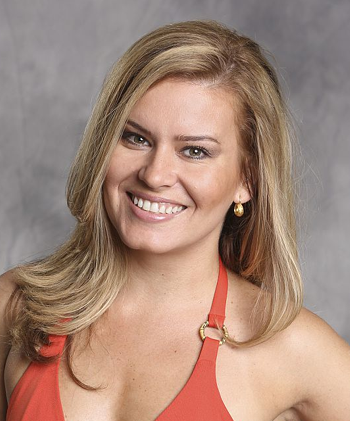 What happened in her previous season: Abi-Maria, the Brazilian firecracker, began Survivor: Philippines on the Tandang tribe along with returning player and walking injury claims victim Michael Skupin. She formed a quick bond with fellow Tandang member RC and flirted with Pete to get him on their side. RC pulled in Skupin, and the four of them formed a majority alliance in the tribe.

Abi injured herself at the first Immunity Challenge – tearing her ACL and therefore had to sit out of almost every challenge at the beginning of the game. Despite this, Lisa Whelchel was viewed as the weakest member of the tribe, but luckily for her Tandang won the first couple of Immunity Challenges. RC shared her clue to the Hidden Immunity Idol with Abi, but Abi soon began to distrust her when she found a later idol clue in RC’s bag. The idol clue was planted in RC’s bag by Pete to cause chaos within the tribe, but Abi didn’t know. Noticing that RC and Skupin were growing closer, Abi, Pete, and Artis formed a counter-alliance to oust them the first chance they got.

Abi later found the Hidden Immunity Idol, which was the handle of the rice container, and kept it a secret from everyone. Tandang got Malcolm in the tribal dissolve of Matsing, and despite the dysfunction and chaos of the tribe, they won every single pre-merge Immunity Challenge, and never went to a Tribal Council.

Abi was seen as a bully along with her alliance members and was quickly outcast by her tribe. The Tandang tribe entered the merge with all seven players intact. With an apparent majority, they attempted to vote out Penner at the first post-merge Tribal Council. Jonathan played a Hidden Immunity Idol, and the rest of the tribe voted RC out of the game, and Jeff quickly followed her. Abi revealed her Hidden Immunity Idol at this Tribal Council as a means of keeping herself protected.

Her allies Pete and Artis were targeted at the following Tribal Councils to weaken the strong alliance of three. Abi was forced to play her Idol to keep herself safe and was left vulnerable for the rest of the game. She managed to win the next Immunity Challenge (with help from an advantage she purchased at the auction), and Penner was voted out. In a moment that showed some real game savvy, Abi made up a lie that her advantage also included a clue to another Hidden Immunity Idol, and fearing this Carter was voted out at the next Tribal Council as not only was he a bigger threat, but it would flush out Abi’s “idol.”

With only five people left, Abi attempted to get Lisa and Skupin to vote out Denise and Malcolm whom she argued would be unbeatable at the end (true), but the damage had already been done. Abi was voted out in 5th place, and despite her quarrels with Denise, she voted for her to win.

What to expect from her this season: Abi plans to be a #spectacle in Cambodia for the Second Chance season, and with her fiery personality we expect her to deliver. But it was that same fiery personality that rubbed her tribemates the wrong way during her first season; she got a big reality check when she watched the season back. At the reunion for Survivor: Philippines she realized that her personality is a bit harsh and that she needed to learn to respect people more.

I don’t think Abi is going to hide her true personality completely; that’s probably an impossible task, but I believe she will be able to tame her more antagonizing traits for the benefit of her game. By all accounts, Abi is a lovely person outside of the game who has become a very active part of the Survivor community. She has made multiple appearances on Rob Has A Podcast, she interacts with fans, and she has met many other former contestants who have all vouched for what a nice, friendly person she is (just don’t ask RC about her).

I expect Abi to be welcomed by many of these Second Chance players. Particularly those from California (Peih Gee, Shirin, Vytas), or those that have strong connections to RHAP (Spencer, Stephen). In a season of strong gamers, Abi probably won’t be perceived as a big threat early on; even though Abi is quite a cunning player that was able to gather a fairly solid alliance in the Philippines. Even when she was an underdog, she found ways to scrape and claw for her survival.

But people tend to remember Abi as the girl that sat out of almost every challenge and who argued with people. Coming into a strategy-heavy returnee season that is a pretty good image to have – it doesn’t scream hardcore gamer. Abi’s primary concern at the start is going to be her performance in challenges. If she is as weak as she was in Philippines, then her tribe may cut her due to challenge strength. But one thing to remember is that Abi had a torn ACL throughout her first season, so not only was she dealing with the elements and hunger and game paranoia, but she was legitimately injured. The girl has fight! Expect her to play more friendly at the beginning of the game and keep her insults for the confessionals.

Prediction: Abi can get very far into the game; especially since the two things holding her back last time were a torn ACL and her brash personality. She’s fully healed from her injury and plans to be more understanding this season. She should be able to use her real life friendships to find herself a good alliance, and if she can hold her tongue and dial back her need to be in control then there is nothing stopping Abi from going deep into the game. Inside Survivor predicts that Abi will either be a late merge boot yet again or even possibly a top three finalist.

Thanks for reading our Survivor Second Chance Retrospective for Abi-Maria Gomes.

What do you think Abi’s chances are next season? Leave your comments below.

Rob hails from Boston, MA. He studied Architectural Engineering at college and has been following Survivor since the first season. He is married and has a dog named Snoopy. He also used to host Survivor ORGs (Online Reality Games).