With this list, I will rank all 32 current members of the Day 38 club. When compiling the list, I took into account the strength of their game, character and the power of their story. Without further ado, the first three members of the Survivor Day 38 Club. 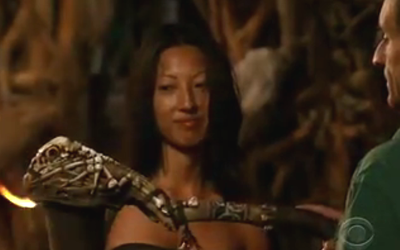 Kim Spradlin is widely considered to be one of, if not the best, Survivor player ever. Known for her innocent charm and sharp strategic acumen, Kim had the game on lock from pretty much the merge onward, and therefore could march to the Final Tribal Council with confidence, knowing she could beat anybody sitting next to her. Thus, she chose to go to the end with her friends Chelsea Meissner and Sabrina Thompson, the stronger players, rather than Christina Cha, widely considered the biggest goat of the game. Kim sent Christina packing on Day 38 of Survivor: One World.

Christina was a very passive personality and seemingly never involved in contributing to the main action of the game. She wasn’t even integral to Kim’s alliance. Rather, Christina spent most of the game as Alicia Rosa’s henchperson, a woman who spewed incredibly insensitive remarks both to the camera and to her face. There were a couple of times Christina was told, to her face, that she would be the backup plan in the event of an idol play. Suffice to say Christina did not display a lot of Survivor savvy and often was not very eloquent in moments that required her to be (“YOU’RE WRONG, SO SHUT UP!!” is not the best thing to say regarding conflict management.)

While Christina was arguably the most ineffectual person ever to be voted out on Day 38, her lack of action mainly came from the fact that she spent the majority of the game as the resilient cockroach that just wouldn’t get squashed. She was never in the majority, often the most expendable of any given alliance and was subjected to some truly horrible remarks from some of her fellow tribemates. But through it all, Christina persevered through the hard times without raising much of a fuss.

If not for Kourtney Moon breaking her wrist in the first challenge and getting medivaced, Christina could have been the first person voted out. She hung on, realizing the best way to move forward was to keep her head down and do as she was told, which propelled her all the way to Day 38. Christina seems like a lovely person off the island and deserves all the kudos for all the crap she had to endure, just not the most dynamic Survivor player, which lands her the last spot on this list. 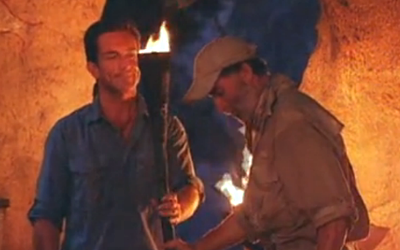 One of only two people in the Day 38 Club to not actually be voted out on Day 38. Keith Famie had his torch snuffed on Day 41, despite the fact that it appeared he was a lock for the final tribal council. The decision was in the hands of Colby Donaldson, the all-American Texas cowboy who had dominated the challenges in Survivor: The Australian Outback. When Colby won the final immunity challenge, he had the opportunity to take Keith to the Final Two for a perceived easy victory. Instead, in one of the most talked about moves in Survivor history, Colby chose to vote Keith out of the game and took Tina Wesson to the end, where he lost to Tina in a close vote of 4-3.

While the reasons why Colby made his decision are still debated to this day, the reasons why picking Keith was the better option were pretty clear. Keith had spent most of the game as a grating personality who simply got on people’s nerves. He seemed like a well-intentioned guy and came into the game with quite possibly the most useful gimmick a person could have during the early days of Survivor: he was a professional chef and was eager to prove his culinary skills useful in the outback.

Keith was regularly mocked and ridiculed for his preparation of almost anything he cooked for the tribe, so much, that other tribe members attempted to usurp his position as chef and cooked things for themselves, often with much better results. Add to the fact that Keith spent the entire game as the third wheel for Tina and Colby, that by the time Day 41 rolled around he wasn’t that well-respected by the jury.

Keith did have a very sweet moment during the famous (and incredibly dated) Survivor internet café reward challenge, proposing to his girlfriend over instant messenger. He also seemed genuinely grateful for the experience, sentiments he expressed during that totem-building montage during the looooooong, drawn-out Australian Outback finale. Ultimately, though, Keith was a guy who seemed destined to join the club of losing finalists but ended up joining a different club altogether. 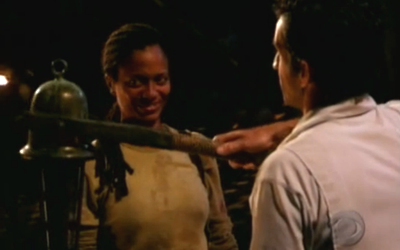 The comeback of the Aitu 4 in Survivor: Cook Islands is one of the most exciting underdog stories in Survivor history. Left for dead when a mutiny left their group an unassuming four while staring down a seemingly tough-to-beat eight-person tribe, the Aitus proved small but mighty. They powered through the game thanks to the challenge prowess of Ozzy Lusth before the merge and the strategic prowess of Yul Kwon after the merge until they eventually became the final four players remaining in the game.

Yul and Ozzy couldn’t pull off the comeback on their own. Sundra Oakley and Becky Lee, the other two Aitu 4 members, helped propel the group through the game by being strategic sounding boards and keeping spirits upbeat. However, when it was time to send one of them out to become the final member of the jury, in the first Final 3 in Survivor history, the Aitu 4 decided it’d be better to let fate decide than group consensus. With Yul and Ozzy both having some form of immunity, the group decided to force a tie between Becky and Sundra and make them participate in a fire making challenge to reach Day 39.

All of this long preamble is to say that both Sundra and Becky were lovely women who were loyal to their alliance, but were mostly interchangeable in the overall narrative of the season. Becky was more connected to Yul than Sundra was to Ozzy, but that’s the only slight difference between them. Circumstances were such that a challenge ultimately decided who stayed and left, and oh boy, what a challenge it was.

The Final 4 fire making tiebreaker in Survivor: Cook Islands lives on in Survivor lore for how completely inept both Sundra and Becky were in building fire. Armed with both flint and matches, the two ladies managed nary an ember for over an hour and a half, with this “showdown” ending only because Sundra ran out of matches, essentially making her the loser by default. Becky eventually got a fire started and “earned” her spot in the final three, sending Sundra out of the game.

To her credit, Sundra took her exit with the same smile and sunny disposition she had for the entire game. She seemed like a sweet and lovely person to be around. It was, ultimately, just a grandiose coin flip that caused her to leave the game on Day 38, rather than advancing to Day 39 to lose to Yul or Ozzy.