Hello world, this is a section of the internet where I give my plebeian predictions for the next episode of Survivor based on the trailers and whatever sneak previews we get for the week. Five episodes into Survivor: Winners at War, and we’re getting our first tribe swap! Both trailers this week don’t reveal much, mostly previewing Jeff Probst announcing the swap and then circuitously evading what happens after that scene on the beach. But based on these trailers and whatever sneak preview we get, I’ll do my best to give my predictions of what I think will happen in the upcoming episode.

First, to give an overview: After Tyson got voted out in the last episode, there are 8 winners left on Dakal: Sophie, Yul, Nick, Wendell, Sarah, Tony, Sandra, and Kim. Even though it was largely a unanimous vote, we do see a split in the tribe—the unconnected one-time players versus the trio who played in Survivor: Game Changers. On Sele, 7 winners are left—Ben, Denise, Adam, Michele, Jeremy, Rob, and Parvati, with the latter two players appearing at the bottom of the tribe. With 15 winners left in the game, the tribe swap will likely split the group into three tribes of five.

The sneak peek then extends on the swap announcement, with a confessional from Rob relating how he ended up at the bottom after the tribe swap back in Survivor: Marquesas. I feel like this could be foreshadowing his fate to come, as he hasn’t been very fortunate this season. Ethan was voted out two episodes ago, Amber and Tyson, who are connected to Rob outside of the game, were also sent to the Edge of Extinction. Moreover, players are clearly targeting him, using his Island of the Idols statue to exemplify his reputation and threat level. While a swap does seem hopeful for him and Parvati (his last clear ally at this point), it really is just a matter of time before he gets voted out. My prediction is that he’ll be eliminated in the next two episodes before the merge.

Speaking of Boston Rob, the episode title, “The Buddy System on Steroids,” references his infamous strategy from his winning season, Redemption Island. Pairing members of his alliance, he convinced them to go about their tasks with their assigned buddy, successfully ensuring that no one in his alliance could engage with someone from the opposing alliance alone. Now, I can only imagine that taking the buddy system to a greater degree would mean that everyone goes about their day together, all five players, as a tribe. I feel like there’s going to be a lot of shadowing, and this would definitely get on someone’s nerve, giving rise to someone exclaiming the episode title during a confessional. 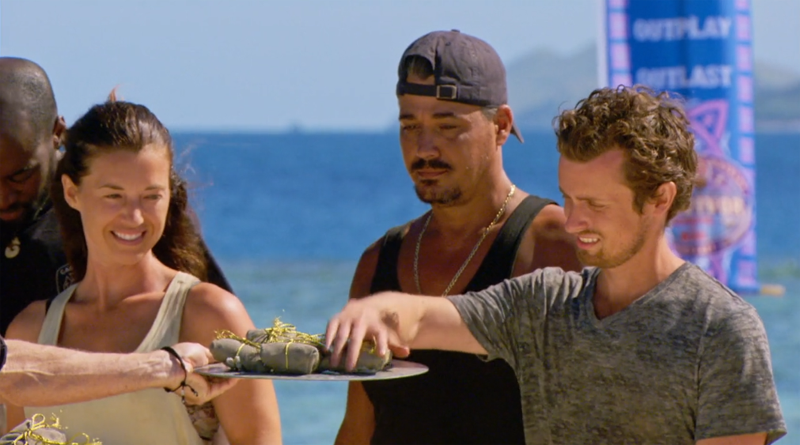 Another key part of the trailers shows Michele exclaiming that she’s on a tribe with her ex-boyfriend, cutting to a brief shot of her and Wendell on Sele. I think there’ll be some awkwardness at first, but I don’t think it’ll overwhelm the decisions on the tribe. Michele’s content has this meta-layer to it—before, it was about her win being controversial and now, about her personal life. I’m not too sure what to make of it yet, but I do enjoy this layer of viewing Survivor that we don’t see that often.

All in all, I believe it’s difficult for the big names to hide in a tribe of only five people. Primarily, I think Rob is in danger, and that the related preview content on him as well as the building up from prior episodes signal that he’s going to join his wife and friends on EOE this week.