This was an episode of two extremes. We began with the humanity of the people we tend to reduce down to “players” or “characters” as viewed through the lens of family, culminating in a heartbreaking scenario playing out for Lee and the Carseldine family. But after the pain of something so raw, the game continues and bulldozes its way into the most manufactured and contrived non-elimination twist yet.

Survivor is a challenging game on many fronts, but there’s a reason we still see the castaways in tears when they receive a letter or message from home or when it’s time for the family reward. By its very design, the game is isolating, alienating its players from the outside world, cut off from everyone they know and love. At the same time, they compete in a gruelling physical and mental battle against relative strangers. When you can’t trust anyone around you, the unequivocal trust and safety of family is something cherished but so distant in the moment. Nevertheless, finding a way to navigate through that heartache and yearning for home is part of the journey—if you can just keep pushing forward, you’ll get back to the warmth of your real life in time.

So it’s painfully jarring when real life doesn’t wait. For all of these players, somewhere at the back of their mind, they’re worried about what might happen back home while they’re playing castaway. Are their kids okay? Their spouse, their parents, their friends? What if something happens? These thoughts and fears can often be put aside, but when a producer calls you aside, and you learn that something has happened, it’s a devastating snap back to reality. 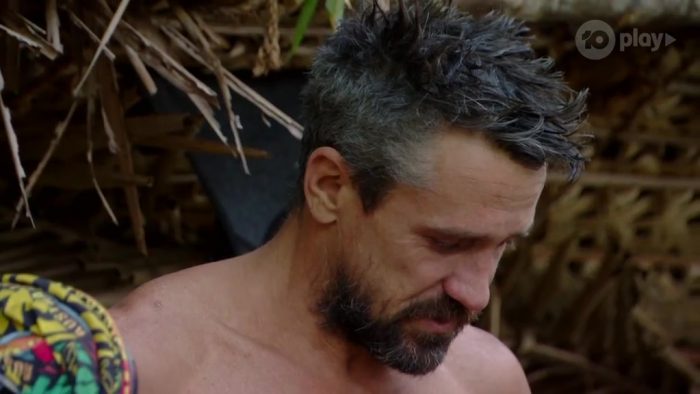 I cannot fathom the disorienting pain of Lee’s situation, being plucked from the mindset of a competitive game and into the nightmarish reality of learning that his mother Beth had had a stroke and was unlikely to make it through. It’s an emotional whiplash of the highest order, and my heart broke for him and his family. It was a relief to see his tribemates gather around him and offer their solace, especially Tarzan, whose friendship with Lee was brought to the fore in this episode. It was emotionally jarring for those just returned from a reward where they were lifted up by letters from home only to be confronted with a worst-case scenario. For Lee and his family an ocean away, this was horrific.

In all honesty, what more is there to say? Survivor is a reality game show, but it’s so easy to get caught up in the strategic game, the characters forged by an edit, and the artifice of the conceit that it can become its own bubble removed from actual reality. In moments as raw as this, where any façade drops away, it can feel intrusive, watching from the comfort of your couch. A medical evacuation is rough, but a family emergency is a whole other level of intensity. 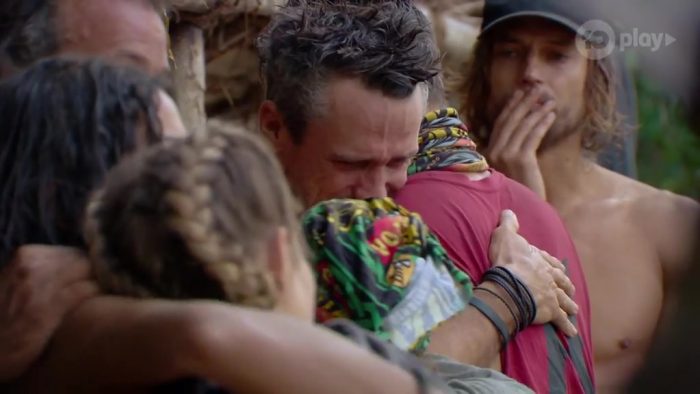 I’m so grateful for Lee’s time on the show before this devastating incident. While I wish he hadn’t been relegated to the background as regularly as he was, seeing his Survivor character develop from a rigid moralist to the goofy dad with a mind towards owning a strategic game was a delight. His under-reported reconciliation with his rival Nick was a heart-warming coda to their story. His presence on this season as a source of good-natured humour and drive will be missed, but the show and the game are the least of concerns. To Lee and his family, I only wish them the best in the hardest of times.

THE SHOW MUST GO ON

Obviously, Lee’s understandable departure won’t stop the game from continuing forward, but it was jarring to come straight back into an Immunity Challenge without skipping a beat. For the remaining players, themselves now in the whiplash of concern for Lee and his family and amplified fears for their own loved ones, I was hoping that production might have made the call to give them a day off. After all, Lee leaving the game means there is one less Tribal needed, and such a precedent is there with the unconventional exits of Peter Fiegehen and Ross Clarke-Jones in Seasons 1 and 4 to give the players a reprieve.

However, we still had game to get to. Another impressive Immunity win from Shonee once again hammered home a firm rebuttal to the “keep the tribe strong” nonsense of the first half of the season, demonstrating again that different people have different strengths. An expected continuation of the Mokuta majority’s firm grip on the game leading to a Pagonging of the dwindling Vakamas was given some additional intrigue by the necessity of them turning on each other in mutually understood self-preservation. As much as David cackled at the idea of the minority eating each other, there was nothing malicious in AK and Brooke deciding to write each others’ names down—it was self-preservation. But it did leave the power of the vote in the hands of the minority, specifically Shonee, who would cast the deciding vote between her two allies. 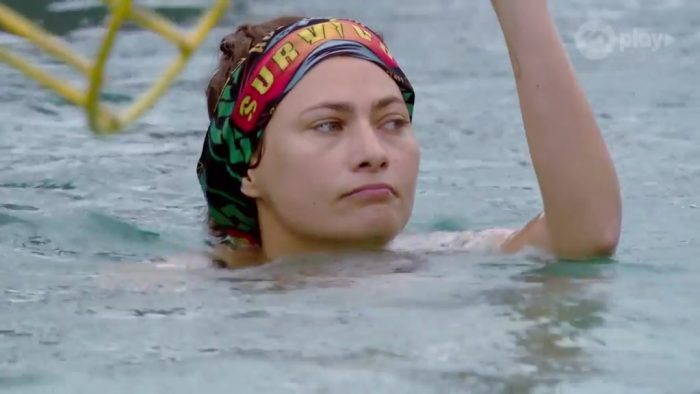 But who cares about that organic drama and strategy that’s been a part of Survivor for twenty years when we’ve got this ridiculous twist? Instead of voting someone off as usual, the three people with the highest number of votes are to be sent to Exile. The same thing will happen at the next Tribal, leaving six of the nine remaining castaways in Exile, where they will then compete in a gauntlet of challenges to earn their continued place in the game as one player among them will fall short and be eliminated.

I lean towards being a Survivor purist, but I’m open to innovative and balanced twists that give players agency and control over how they play the game, and how they can utilise the twists and turns of the game to advance themselves further. While there’s room to see the repercussions of strategically planning around the twist in the next episode, this convoluted twist is yet another Australian Survivor non-elimination twist that forces its own narrative, punishes players who are playing well and upends the tried-and-true principles of Survivor for the hell of it.

Non-elimination episodes are the unfortunate solution to the requirement of the quota demands of Australian TV, but they just keep getting worse season after season. After two seasons of a one-off Redemption Island-style duel that was insignificant at best in Season 3, and straight-up a waste of time in Season 4, production has now decided to force it into an even more bizarre evolution, sending two-thirds of the tribe into a sudden death challenge. 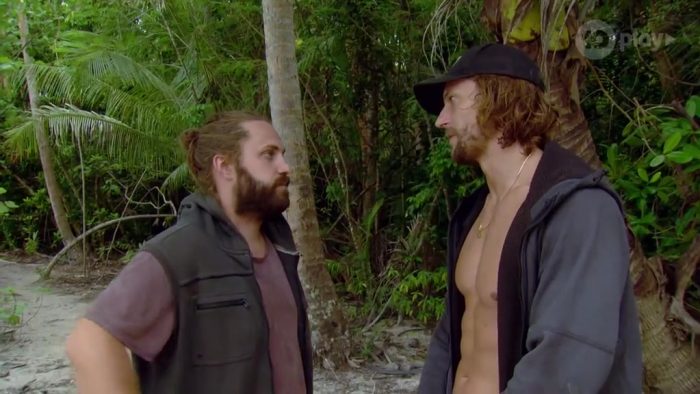 Although the six competitors facing the challenge gauntlet are technically “voted” into this vulnerable position, they’re not really voted out under the strictures of Survivor. At least Anita & Tegan and Daisy & Simon found themselves in a duel after being voted out at separate Tribals, receiving the most number of votes but being lucky enough to receive them at a time when the game offered a second chance. Even Lydia & Phoebe earlier this season were each voted off by their tribe separately before facing off in fire. Here, sending the three people who get the highest number of votes into this position means that the vote is not a reflection of how Tribal Council is intended to work.

The majority alliance was still able to stick to their 3-3 vote split and send AK and Brooke to the limbo of Exile, but it gave equal power to the minority Vakama alliance to drag someone down with them. They chose Moana, who had worked hard to solidify herself at the centre of a majority alliance—arguably positioned even better than David—with tight one-on-one bonds that could propel her to the Final Two. Because of this twist, she is now facing elimination, and if the challenges in the gauntlet don’t favour her, she’ll be out of the game for good.

Yes, the Vakama minority made a strategic decision in choosing to pile votes onto Mo—if she does lose the gauntlet, it’ll remove a core figure from the opposing alliance and open the door for them to recover, and Mo’s performance in challenges is inconsistent, giving them a better chance to best her over someone like David. Perhaps it’s also a reflection of Vakama’s resentment towards Moana’s grip on the game or her limited social game. But Moana didn’t get voted out, she got nominated for elimination. It still seems like an unfair twist of the knife for Moana’s largely effective and successful gameplay to be threatened by an unprecedented twist that gives power to the minority alliance just because. 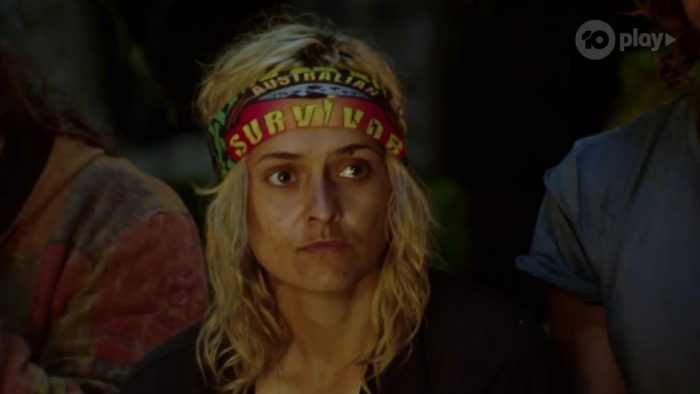 One of the small silver linings to this twist is that in the climate of this season, it accelerates the need for the firm Mokuta majority to turn on each other. It widens the fissures, exposes the cracks and opens the door for a more dynamic free-for-all game once this week of nonsense is over with. I’m wholly open to the fact that in the long run, this twist will help to make for a more exciting endgame—and definitely one that could help the minority alliance of AK, Brooke, and Shonee survive an otherwise predictable and dire fate. Nevertheless, I don’t believe that this result justifies the means.

If this season was already a shifting landscape of intriguing strategy under the rules of Survivor, a twist like this would create mayhem but it would derail something that is already intriguing. And maybe I’m in the minority on this opinion, but there is nothing inherently bad about a Pagonging—a majority alliance picking off the minority. If the edit prioritises nuanced and well-rounded characters and begins sowing the seeds for the majority alliance’s eventual need to turn on each other, a predictable outcome can still be an interesting and engaging journey.

To me, this twist feels so far removed from what makes Survivor Survivor. It futzes with how voting works at Tribal Council, and in doing so, punishes players who’ve built themselves a secure position. It makes challenge performance the deciding factor in the post-merge game. It needlessly accelerates a majority alliance’s fracturing instead of allowing those cracks to inevitably and naturally form. But I’m going to give it a fair chance to prove me wrong. This twist is going to take up this whole week of Australian Survivor, so maybe once we’re through, I can look back in hindsight and see the forest for the trees. But at first glance, when it comes to my personal taste in Survivor, this is a hard pass.

For me, Survivor is always about the characters. The people out there playing the game. Their trials, defeats, and victories. Their wants and needs. Their skills in navigating a complex and ultimately selfish game in the crucible of a depriving environment naturally forges bonds of solidarity. I love the complexities of the strategic game and cleverly executed uses of twists like Idols. Still, if those strategies don’t come back to the people, their social connections, and ultimately their humanity, I might as well throw a bunch of names into a random number generator and see what comes out. That can still be fun, but it’s not what keeps me invested in Survivor.

Austin hails from Canberra, Australia. By day, he works by the light of office fluorescence. By night, he can be found swing dancing to Top ‘40s tracks (1940s, that is), playing board games, and enjoying life with his wonderful wife. His pedigree as a long-time Survivor superfan is evidenced by his Survivor-themed 11th birthday party featuring a gross food challenge comprising Brussel sprouts. Austin writes Inside Survivor’s episode recaps for both Survivor US and Australian Survivor.