FIRE TOKENS REPRESENT YOUR LIFE — It looks like we’re going to get a fire token segment every week. This episode was less about the currency itself, though, and more about the determination of the players to push themselves. The Edge of Extinction scene was definitely more journey-edit orientated this episode, especially as far as Ethan was concerned. But it was Natalie who once again received the most positivity in terms of dominating on her quest for tokens.

ADAM THE RAT — As predicted, Adam was the center of the drama on the Sele tribe last week. He’d been exposed as playing both sides and was now on an apology tour. Most of, if not all, the strategy on the blue tribe was about Adam and whether he could be trusted. There was a lot of story set-up here, from an underdog arc for Adam, to a potential rivalry narrative with Michele, Jeremy, Parvati, and/or Rob.

TONY ON PROBATION — If you needed any more evidence that Tony’s “probation” strategy is working, you only have to listen to what Yul said at Tribal Council. “The reality of who they actually are is very different to what I thought coming into the game,” said Yul. “Like, Tony, I thought was gonna be an a**hole, but Tony’s actually a really caring person, people like him.” Even though there was a lot of ominous talk about big threats and shields in this episode, this line from Yul continued Tony’s story and showed he is successfully lowering people’s guards. 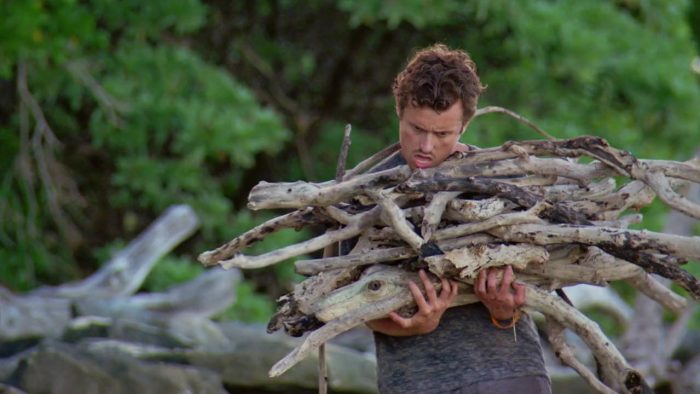 FREE AGENTS VS. THE CONNECTIONS — This storyline, which was prevalent in the premiere, respawned in the last episode from the Sandra vs. Tyson showdown over on Dakal. There was a lot of talk about how the unconnected players (Nick, Sophie, Wendell, Yul) intend to pick off the connected players (Kim, Sandra, Sarah, Tony, Tyson) one-by-one. I expect this to be a focal storyline in the coming episodes.

The question is whether or not Tyson’s premonition will come true. With Tyson’s elimination, does that leave the other connected players at risk? It’s certainly possible, and the likes of Sarah and Tony voicing their concerns about what could happen if they took out a shield like Tyson could be foreshadowing. But you could find similar foreshadowing in Yul’s comments. Yul stated that the free agents were the strongest alliance on the tribe and that no one suspects them. That was proven wrong, as Tyson and the others were aware of the threat posed by that unconnected group.

MICHELE HAS SOMETHING TO PROVE — There wasn’t a huge follow-up on this storyline in the latest episode, but it was still present. There was a short scene of Michele talking to Rob about the backlash she received after her controversial win in Kaoh Rong. “Hey, if you win, you win. The end,” said Rob, offering a pep-talk. Receiving that validation from Boston Rob, who is held up as an icon of Survivor, is further confirmation that Michele is proving herself. And she’s probably going to make her mark this season win, lose, or draw. 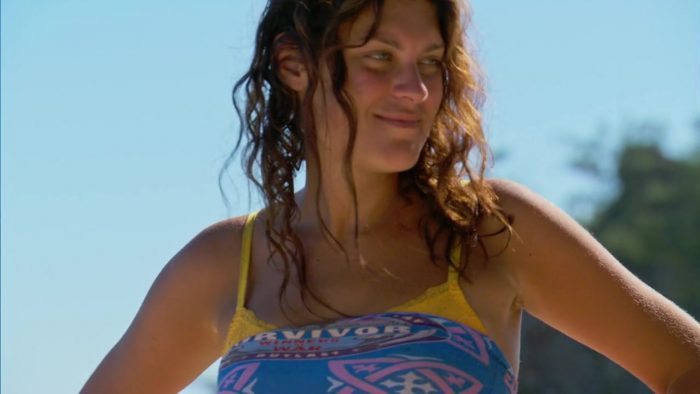 “I’M WITH YOU” — This was something Nick said at Dakal’s Tribal Council, referring to the upcoming swap and how he has no intention to flip on his current tribemates. This was backed up by every other member of the tribe. Given that the tribe swap is happening next episode, I feel like this had to be intentional foreshadowing. There was so much talk about keeping up the “facade” of one, big, happy tribe, that it seems set-up for someone to flip — and this could tie into that Free Agents vs. The Connections storyline.

COPS R US — Sarah and Tony got another scene together this episode, this time talking through the strategy of the vote. They were weighing their options of whether to keep Tyson as a shield or let him go. They both agreed that with Tyson gone that they could be next in line. Now, as Tyson ended up leaving, that could spell trouble for the Cops R Us duo.

However, it should be noted that Sarah and Tony were given an out. The responsibility of the vote was put on Sandra. As Sarah explained, “it all hinges on Sandra,” and while Sandra agreed that Tony was right, she said that she couldn’t trust Tyson. This could mean that Sandra will end up taking the fall for this decision.

JEREMY & MICHELE — Once again, there were plenty of scenes of Jeremy and Michele together discussing strategy. It was those two who discussed whether Adam should go next or not. But I have to wonder why they still haven’t received a proper scene cementing their alliance. They never talk about each other in confessional the same way other alliances and duos have done. That makes me think the alliance isn’t super important long-term. 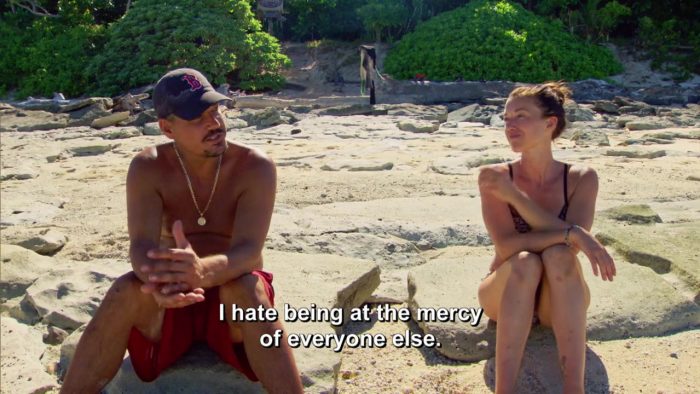 ADAM & DENISE — Another alliance that’s taken a hit in the past couple of episodes. Despite what seemed to be a close connection early on, Denise has now left Adam out of a plan, and there was no reconciliation scene in the latest episode. In fact, Denise was pretty under-the-radar throughout the episode. There’s enough early content to suggest these two could rebuild later, but as with the above, it’s no longer feeling long-term important.

PARVATI & ROB — Not much change for this old-school duo, who remain tightly aligned despite being massively outnumbered on their tribe. We saw Parvati thanking Rob for looking out for her, and later the pair of them tried to trip up Adam. But there wasn’t much else to go on here.

SOPHIE & YUL — I’ve had to move this pairing down a notch, seeing as we haven’t heard from them since the premiere. Yes, Yul referenced Sophie as being part of his free agents clique, but there was nothing specific about them as a duo. I’m not sure what to think about this, to be honest. It looked like the Sophie & Yul partnership was going to be a critical part of the narrative after the first episode, but that becomes less and less likely with each passing week.

KIM & SOPHIE — Another relationship that seems dead in the water. There has been no follow-up since Kim shared her idol with Sophie back in episode two. Even if there is an eventual conclusion to that idol arc, it certainly doesn’t seem like Kim and Sophie share a relationship that is crucial to the overall story of the season. 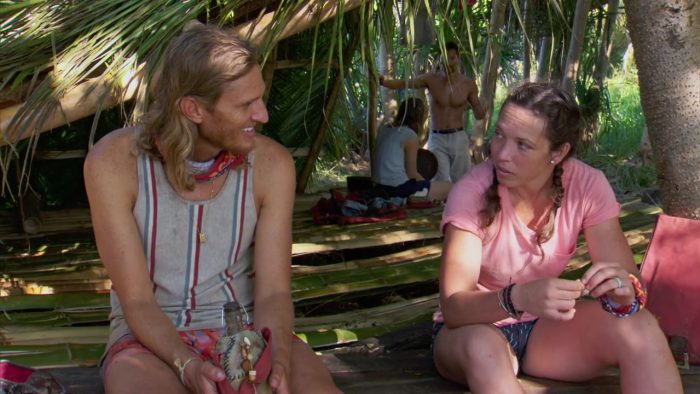 SARAH & TYSON — This is a bit of a weird one. There was a specific focus on this unexpected friendship in the last episode. Now, I can’t tell if this was included simply to add some tension over the Nick vs. Tyson vote or if there is more long-term relevance. We know how much the EOE can influence the game this season, so there is always a chance Tyson could play a part in Sarah’s game from beyond. It’s hard to say. However, I’ve put it in tenuous relationships merely for the fact Tyson got voted out, and Sarah voted for him.

As I’ve said before, I’m pretty low on anyone from Sele winning, but I like to at least keep one or two in the conversation for the sake of balance.

I keep ignoring the Edge of Extinction because I hate it, but I’ve seen your comments, and I suppose it’s about time I face reality and accept that we could get another winner from the Edge. This became clear in the latest episode when Amber talked about how much they’d all bonded in such a short time. That is the kind of thinking that leads to a jury of Edge inhabitants voting for their fellow Edge survivor.

Of the group that’s currently at the EOE, I think Natalie probably has the best chance of winning. Amber and Ethan seem like journey edits. And while I could possibly see Danni as an under-the-radar Chris Underwood type, I’m not sure she would have been made to look so foolish and paranoid in her boot episode if she ended up winning. Also, I don’t feel like the show would repeat the Chris edit for this season.

Natalie, on the other hand, had a relatively quiet edit in her boot episode, and her elimination wasn’t presented as a mistake on her part. Since then, she’s taken charge of the EOE, racking up tokens and outsmarting her competition. Again, it’s tough to say if this is merely circumstantial. Still, the edit is certainly laying it on thick in terms of positive content for Natalie — just listen to the way her tribemates described her this past episode and that epic action music she received. “Natalie, I don’t think she’s human,” said Danni. “Natalie is a monster,” said Amber. “She is a beast,” Ethan added.

I think if an EOE player was to win the all-winners season, especially the first boot, the edit would want to show that person had earned it. So I could definitely see this as a coronation edit for Natalie, as much as it pains me to consider that a voted out player could win this season. Or it could suggest a Rick Devens type run for Natalie if she returns at the merge, not a winner, but a big post-merge character. On the flip-side, there is no getting around that Natalie is kicking ass on the Edge, so maybe all of this content would be shown regardless.