If there are six contestants on Exile Beach, can it still really be considered exile? This episode, we don’t get the answer to that question, but what we do get is a rapid-fire episode by Australian Survivor standards with a one-hour episode to show us who will be the remaining three contestants to be sent to fight for their lives on Exile.

Its not quite Love Island but with three contestants currently on Exile, we start to see this is nothing more than a Survivor holding pen, a purgatory if you will, for the contestants to mope around and exist until the time comes for them to earn there way back in the game. The overarching theme throughout our time on Exile is that the relationships that are formed here might play a pivotal role in the game moving forward. We hear from Moana that she is going to come back with a vengeance and that she wants to build relationships with Brooke and AK so that she can use them going forward if she needs to. Getting eliminated hurt Moana and has lit a fire underneath her, which is only exemplified by the hero edit that she is getting.

Back on the Kalo Kalo tribe, David is planning on executing a plan of mass manipulation by trying to get Zach to volunteer himself to go to Exile. In theory, this twist is designed for players on the bottom to have a chance to make a move. It allows small alliances to rise up and use whatever numbers they can gather to drag a big player like David down along with them upon their demise—a last-ditch effort to switch up the momentum in the game. David knows this and realises that even though he is in the majority alliance and well insulated, he can very well be a causality of someone’s last-ditch effort to send him to Exile, where he has a small chance of getting eliminated.

David tells us that getting Zach to go to Exile (and having him be okay with it) is the best move as he has a decent chance at getting back in the game and not holding any grudges towards him for being voted out. This way, David can manoeuvre around this twist and come out the other end with his majority alliance (for the most part) intact. There’s a brief conversation between Zach and David, where Zach says that winning his way back into the competition would be a big move that he could add to his resume. Under normal circumstances, this plan should absolutely not work, and we should all be mocking David for even suggesting something so ludicrous. But, bearing in mind what Jonathan said at the last Tribal Council, that the six Exilers will compete in challenges to get back and only one person will be eliminated, the overwhelming assumption is that the player sent home would be the one who performed the worst in the challenge.

So, in actuality, the idea to send your best challenge performers to Exile to guarantee the elimination of a Vakama member is suddenly a lot more reasonable, especially considering the odds of surviving elimination are pretty high. With Shonee and Zach already set as two of the three players that will be targeted by David, it leaves one more spot to be filled. David tells us in a confessional that he does not want to send Tarzan out as he is important to his end game plans. He also doesn’t believe Tarzan is capable of winning his way back into the game through a challenge. With Tarzan out of the mix, that leaves Sharn and Jacqui as the last two possible options. 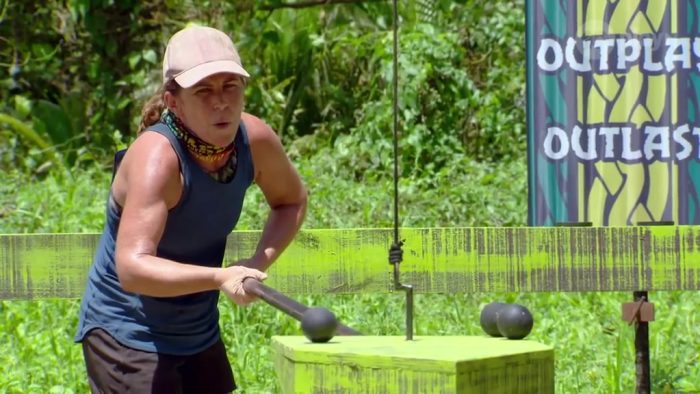 Before that decision can be made, though, there is an Immunity Challenge. In order to execute his plan as smoothly as possible, it is imperative for David to win Immunity, so his name being brought up is completely out of the question. Of course, things don’t always go to plan on Survivor, meaning that Sharn wins a tightly contested challenge where the players have to balance three balls on top of a board. With this win, not only does Sharn save herself from a trip to Exile, but she also keeps the streak of consecutive female Immunity wins alive at five. A man has yet to win an Immunity Challenge post-merge. So, with Sharn out of contention, David’s attention now must divert towards sending Jacqui to Exile.

As someone who was one vote away from winning her season, Sharn has done an incredible job minimising her threat level and creating relationships with people that can keep her safe. However, with the safety of Immunity giving her confidence, Sharn decides that now is the time to pull off a big move by attempting to blindside David. Before I get into the questionable logic behind this move, one of the first things we hear from Sharn when she gets back to camp is that she is in a powerful position now that she has Immunity because she gets to choose who goes to Exile. It’s an interesting statement because while winning Immunity can increase the likelihood of people wanting to talk to you and loop you into the plan with the majority alliance, it by no means diminishes the importance of numbers and strong relationships. It’s a distinction that could perhaps come back to bite Sharn later on in the game.

I can’t blame Sharn for suggesting David’s name, even though he is a strong challenge performer and could easily return, he is currently ill and hasn’t yet won an individual Immunity Challenge. There is the possibility that David chokes in whatever challenge he faces and gets sent home. But considering that nobody can know for sure what the challenges will be on Exile, it is still a move that doesn’t seem worth the risk of David having a 5 in 6 chance of coming back into the game. The odds are so statistically in his favour that it makes no logical sense to “blindside” someone who will more than likely walk back into the game with a vengeance against you. 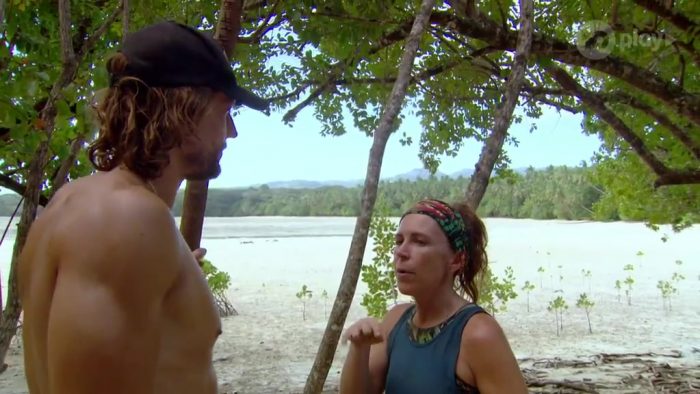 When it comes to Sharn and David coming together to discuss who should go to Exile, things get awkward once Sharn begins to subtly hint at the fact that she wants David to volunteer. The Golden God immediately retaliates and uses the fact that he has been sick for the past few days as an excuse to make himself seem weak and useless in an event where he must compete in a challenge. As David pleads his case, Jacqui steps in on the conversation, which gives him the perfect opportunity to shift the conversation away from himself and onto Jacqui and her ability to perform well in a variety of challenges. David straight out asks Jacqui how she would feel about going to Exile. While Jacqui isn’t thrilled with the idea, the pressure of being put on the spot is enough for her to go along with the plan and agree to it.

However, Sharn still isn’t happy with this outcome; after all, she won Immunity, which means that she has total control over the game. She takes Tarzan and Jacqui aside to tell them that she doesn’t want Jacqui going to Exile and risk being eliminated and proposes that they keep Jacqui and vote out David instead. Obviously, Jacqui is over the moon to hear this plan, and Tarzan also appears receptive to this and agrees to vote out David… that is until 5 seconds later, when we see Tarzan completely sell Sharn out and tell David the plan to vote him out. Suddenly it becomes a lot more obvious why Tarzan is in David’s end game plans.

Of course, this is where we end the scene going into Tribal Council. What we know heading into the vote is that it’s going to be split 2-2-2 on Shonee, Zach, and either Jacqui or David. The actual specifics of the vote itself are very vague. We aren’t really told who is meant to be voting for who. The only thing we know for certain is that Shonee is going to be sent to Exile since her story was all but written within the first few minutes of the episode for not being in the majority alliance.

THE DEVIL IS IN THE DETAIL

At Tribal, JLP reveals to the contestants the full details surrounding the twist. In essence, there will be two challenges for the Exile contestants to compete in to get back into the game. From there, the remaining contestants will go to Tribal to vote one of the remaining vulnerable Exile players out of the game for good. This twist has significant implications on the strategy as now it becomes a lot more feasible for a player, like Sharn, to use this twist to make a big move. The only problem is that production gives these contestants so little time to actually absorb the twist that it makes it impossible for any true strategic plan to be fully realised.

I mean, look at what David was able to do! He was able to manipulate Zach and convince him that volunteering to go to Exile would be a heroic decision that could win him the game in the end. With all the information out on the table, we could’ve had a situation where multiple plans were successfully executed simultaneously, leading to multiple blindsides. This begs the question, why would they wait for the second episode and Tribal to reveal the full extent of the twist? For a show that tries so hard to come up with ways to force their players to make big moves, doing stuff like springing twists on contestants last second or omitting the rules of their twists for their contestant’s knowledge really goes against the show’s agenda. If this is what they are genuinely after, then it honestly makes no sense from a production standpoint. 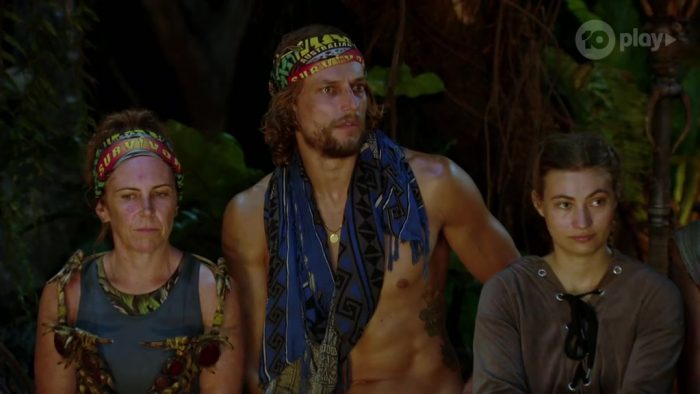 Nevertheless, once the votes are read, Shonee and Jacqui are definitely going to Exile, but there is a tie between David and Zach. Now, Sharn and Tarzan must go back and vote for either David or Zach. What we get, once again, is an example of Sharn making a really half-baked attempt at making a move and ultimately votes with the original plan of sending Zach to Exile anyway. If the rules of the vote would have remained the same, then forcing another tie vote would have made David and Zach draw rocks. But David is now sketched out by Sharn with her wishy-washy gameplay, although Sharn isn’t expected to know that.

All that Sharn has done is show her cards and make a semi-committed attempt at taking out the central figure of the game—someone she was meant to have a final 3 deal with alongside Moana! There is definitely an argument to be made that once Sharn realised that Tarzan didn’t vote with her that she freaked out and voted again with the majority so that she can at least have some credibility once she gets back to camp, but at that point, the damage is already done.

Going into the next episode, we head into a situation where Sharn will more than likely find out that David knew about her plan all along and will have to do damage control. What will be most interesting to see play out is how the Exile twist will act as a distraction to what happened in this episode. How will the injection of 5 players who have had time to bond and make new relationships impact the momentum of the game?

Dylan is a journalism graduate living in Sydney, Australia. He likes cooking, playing board games, playing tennis, and thinking he is better at them than he actually is. After living most of his life as a closeted Survivor fan, he is now finally embracing his one true passion.