Hello world, this is a section of the internet where I give my plebeian predictions of the next episode of the Survivor season, based on the trailers and whatever sneak previews we get for the week. As we know from the entirety of the preview trailer, the family visits are going to be in the coming episode. And unique to this season, we’ll see multiple loved ones and family visits for those still living it out on the Edge of Extinction. Even though this would take up a sizeable portion of the run-time, the episode description does state that a “wild Tribal” will also happen.

Breaking down the NTOS trailer, there are two lines that we can safely pick out as general pre-Tribal comments to hype the audience up. These include Sophie’s confessional stating that “the war is happening tonight,” and Ben’s confessional that “tonight there will be blood.” Apart from these quotes, I gather that there are three different lines of strategy here.

Firstly, Jeremy would like to split up Sarah and Sophie. The two women have been together since the start of the game, on the original Dakal tribe, and then the swapped Yara tribe. It’s clear to the audience, and I’m sure the players as well, that the two are close allies. In the trailer, Jeremy appeals to Tony, a fellow member of the 4-person big threats/lions alliance. I feel like Jeremy would be better able to convince Tyson and Ben (the other two members of the alliance), as I think Tyson seems to be alright with any vote but him, and Ben would be easy to sway, having experienced first-hand how close Sophie and Sarah were on Yara. I think Jeremy’s proposition to Tony would send the latter spiraling into a bit of a frenzy, seeing that he committed to the Cops R Us alliance prior.

This is then in line with Tony’s comment in the NTOS trailer, where he asks Nick and Ben if they would consider blindsiding Jeremy. I could see this happening too, as I felt the vibes were a little off with Jeremy two episodes ago when the tribes merged. Jeremy mentioned he wishes to control the vote while not letting others know he’s controlling it but was quickly undermined as he went around camp, throwing Adam’s name out to multiple groups of people. I think Tony will be in a position where he has to decide if he wants to be on the side of Jeremy or Sarah, and my hunch is that he’ll take Sarah’s side. 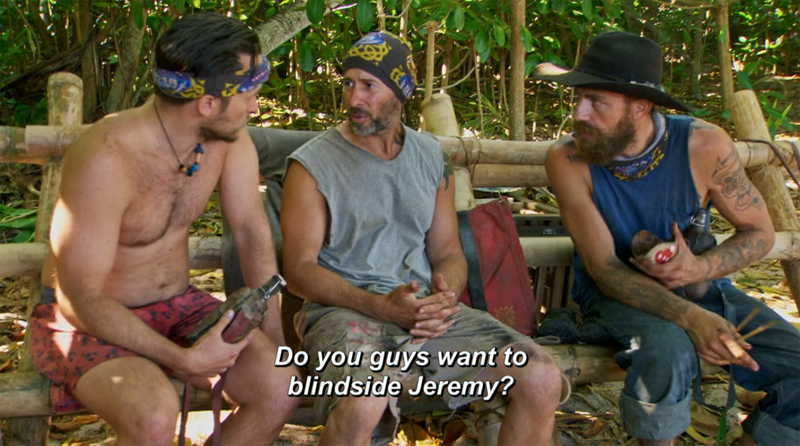 Sarah is also shown strategising with Tony, saying that “this is a crucial decision” and that “this is going to end badly.” I feel like this is Sarah already privy and aware of Jeremy’s plan after Tony reveals it to her. I think she’ll leverage on her Steal A Vote advantage (and possibly Sophie’s hidden immunity idol) to pull the numbers to her side against Jeremy. However, I also feel like that’s a little too obvious, and Sarah might target someone else instead. Perhaps Denise, who is close to Jeremy, and who has also created a reputation for herself as the Queen-slayer. Or Tyson, who is in Jeremy’s alliance but not aligned with Sarah, as far as we can tell.

It’s also worth noting that this is the last time Jeremy can play his safety advantage to leave Tribal Council before the votes are cast. My guess is that he doesn’t play it but barters it for some fire tokens later on. I feel like he does feel safe with the numbers he thinks he has—the lion alliance and possibly Denise and Kim. Kim’s conversation with Denise in the NTOS trailer that she’s ready to make a move perhaps alludes to the two women using their immunity idols to blindside those who are voting for Jeremy. At this point, I’m leaning towards either Tyson or Sarah going home.

Let me know your predictions by leaving a comment below!