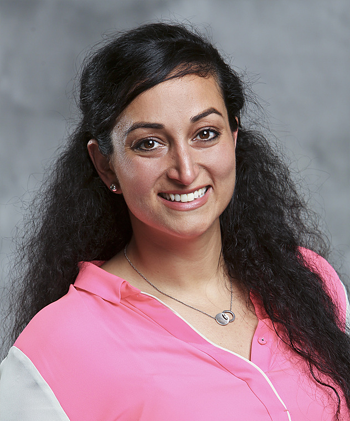 Age: 32
Hometown: San Francisco, CA
Previous Season: Survivor: Worlds Apart
Previous Placing: 8th
Most Memorable Moment: After being verbally assaulted by Will at camp, Jeff asked if anyone objected to Will receiving his loved one’s letter at the next challenge. Shirin raised her hand in defiance thus denying him his letter, and showing that she didn’t approve of his bullying.

What happened in her previous season: Shirin Oskooi started out her first season as one of the self-proclaimed “superfans” of the show. As a Yahoo executive, she was placed on the white collar Masaya tribe. She quickly formed a bond with fellow superfan Max. At the tribe swap, she ended up with Max and Carolyn, but she and Max’s close bond and “annoying” personalities quickly put them both at the bottom of the tribe. Max was voted out at the first post-swap Tribal Council, and Shirin realized she needed to dial back her enthusiasm a bit. From bottomless dish washing to enthusiastically detailing her experiences of viewing monkey sex, to miming her excitement for the game with Jeff Probst, she became one of the more likable people in the cast to us as viewers.

While her antics were entertaining for us to watch, they rubbed her tribemates the wrong way. She was verbally berated by Dan, and later Will, which prompted one of her most memorable moments – when she denied him his loved one’s letter and stood up to his bullying. Shirin was in the minority once again after her allies, Joe, Hali, and Jenn were voted out, leaving her and Mike to have to fight to stay in the game. Mike and Shirin formed a very close bond out on the island; he was the one to save her from the verbal abuse she was getting from Will.

Mike made a play to keep Shirin in the game by bluffing that he would play his idol on her. But Shirin was voted out; although it showed the fractures in the majority alliance. During each following Tribal Council, Shirin became the impromptu “Eliza Orlins” of the jury giving us great reaction faces and a memorable Final Tribal Council speech. She was able to praise Mike and Carolyn’s games while calling out Will for his “dead fish” style of gameplay. She voted for Mike to win because she believed he played the best game, and he helped her in her time of need.

What to expect from her this season: Shirin is a huge superfan, and on paper, there is a risk she is going to freak out about being able to play with former Survivor players. However, she proved on Worlds Apart that once she is made aware of how others are perceiving her behaviour, she can adapt and set about on a new course. I expect that Shirin will be very aware of how her over-enthusiasm rubbed people the wrong way last time, and will tone down accordingly. Although on a season of returning players, who are all enthusiastic and excited to be out there, I don’t think Shirin’s super fandom will be as big of a problem as it was amongst the likes of Joaquin and Will.

It is no secret that Shirin had a tough experience the first time on Survivor, so expect her to relish her Second Chance and her opportunity to play with, hopefully, more likable and game-focused people. Shirin will want this season to be fun, and she should be able to make early bonds if with the right mix of people; she appears to have been accepted by the Survivor community, and I expect many of them will be open and willing to work with her.

Shirin is a loyal ally; she proved this by sticking by the sinking No Collar alliance on Worlds Apart, and this will be taken into account by her fellow players. Her knowledge of the game and her competitors could also prove very useful in an all returnee season. Shirin’s worst case scenario would be starting on a tribe comprised of the likes of Jeremy, Keith, and Terry, and maybe even Joe; an all guy’s alliance who pride themselves on physical dominance could easily pick Shirin off if she messes up on a challenge.

Shirin’s best case scenario is starting on a tribe with fellow enthusiastic Survivor nerds like Spencer, Stephen, and even Jeff Varner or other powerful, scrappy women like Abi-Maria, Kelley, and Peih Gee – Shirin would relate and bond with these people easily. Shirin also works at Yahoo, as does Andrew Savage, so there is a potential bond there that could prove helpful within the game. Overall, expect to see Shirin having more fun this season, and perhaps getting a chance to be more cut-throat should she make it deep.

Prediction: Shirin could have a tough ride to get to the end due to her superfan status; she very well might be targeted early as she knows a lot about the game and players, and if this scares people then Shirin better get scrambling. But with the cast of Second Chance being announced well in advance, it is to be expected that every player did their research and knew about each other. In that case, Shirin’s knowledge shouldn’t be more threatening than anybody else’s – save for maybe Kelly Wiglesworth’s.

She also (unknown to her at the time that she’d be asked back to play again) admitted to making her first million at the age of 25 during the Worlds Apart season finale. It is possible people use this an excuse to get rid of her, but it could just as easily be used as a reason to take her to the end under the assumption no one will give her another million. If Shirin gets in with the right people, she has a great shot, and I honestly see Shirin being able to get in with the majority of this cast. It would take a severe stroke of bad luck for her to get stuck on a tribe where her only potential enemies have control. Inside Survivor predicts that Shirin will get in a solid alliance very early, and will be trusted because of the loyalty she displayed on her original season; she will also be able to form connections outside of that alliance that will take her deep into the merge, and possibly to the end.

Thanks for reading our Survivor Second Chance Retrospective for Shirin Oskooi.

What do you think Shirin’s chances are next season? Leave your comments below.