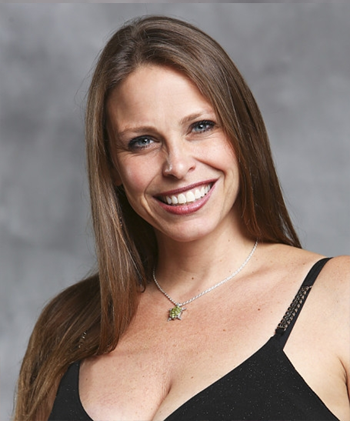 Age: 42
Hometown: The Woodlands, TX
Previous Season: Survivor: The Australian Outback
Previous Placing: 12th
Most Memorable Moment: Eating a mangrove worm to win Immunity for her tribe, and being part of the infamous finger-wagging fight with Alicia.

What happened in her previous season: Kimmi Kappenberg was part of the most-watched season in Survivor history – Survivor: The Australian Outback. While she may have only lasted five episodes, Kimmi’s colorful character certainly left an impression on the season and was a big part of why pre-merge Australian Outback was so entertaining. Right out of the gate Kimmi made herself known. She didn’t hold back, whether it was lecturing the world on her vegetarianism or wondering aloud where she was going to masturbate. Her abrasive personality rubbed some of her fellow castaways the wrong way, in particular, Debb and Jeff. Her loud voice and constant talking in the shelter on the first night had Jeff claiming he wanted to “shake the sh*t out of her”. Despite this, Kimmi was able to survive the first Tribal Council and her rival Debb was voted out unanimously.

Perhaps Kimmi’s proudest moment came during the second Immunity challenge of the season. It was the challenge where the castaways had to eat disgusting foods. Kimmi’s first food item was a cow brain which she refused to eat due to her strict vegetarian beliefs. However, she redeemed herself when the challenge came down to a tie-breaker between her and Ogakor’s Tina, where they had to eat a mangrove worm – “Oh, I can eat a worm!” Kimmi exclaimed. She finished the worm before Tina, thereby winning Immunity for Kucha. On the flip side, her least proud moment was her argument with Alicia. Kimmi wasn’t happy with the way her tribe was handling the chickens, which they’d won at a Reward challenge, and with a little encouragement from Jeff, this led to the now infamous “finger-wagging” fight between Kimmi and Alicia. Kucha enjoyed a winning streak which kept Kimmi safe for a while, but when they finally lost again after four consecutive wins, Kimmi was voted out in a 6-1 vote.

What to expect from her this season: Fourteen years later, Kimmi is now a mother of two boys, and I would guess that she has calmed down quite a bit. Hopefully, that doesn’t mean she will be any less entertaining. But I imagine she won’t be talking about masturbation this time; knowing that her children will be watching. It’s hard to judge Kimmi as a player because Season 2 was still very much Survivor in its early days of game-play. The game hadn’t evolved beyond getting in a tribal alliance and sticking with it until the end. Kimmi, however, wasn’t part of any alliance and that is ultimately what hurt her in the long run; more so than her grating personality. In her CBS campaign video, Kimmi stated that she knows how important it is to be in an alliance now and that is something she is going to be looking for. I expect to see an older, wiser Kimmi that is a lot more aware of her perception amongst her fellow castmates.

The biggest problem I foresee for Kimmi is her lack of connections to the rest of the cast. Sure, her Australian Outback rival Jeff Varner is in the mix, and as fun, as it would be to see them work together, I don’t think Jeff will be clamoring for an alliance with her. There are certainly people on the cast she could bond with; Kelly Wiglesworth and her share that old school female bond. There are other parents on the cast, such as Ciera, Kass, and Terry, that she could also bond with. But I can’t imagine Kimmi was part of many pre-game alliance talks, and if the game ends up being run by the modern-day players, it is hard to see them having a spot for her. With that said, she isn’t entering the game as a major threat, and if she can tone her personality down enough to get into an alliance then she could be in for the long haul.

Prediction: I’m really torn on Kimmi. On the one hand, I can see her repeating the success of other recent over 40 women on Survivor and making it all the way to the Final Tribal Council. But then, on the other hand, I could see her been easy pre-merge fodder for a tribe trying not to rock the boat. I don’t think Kimmi was ever the greatest challenge performer (despite her worm devouring skills), and history has proved that the “older woman” is often made the scapegoat for early challenge losses. If Kimmi is on a tribe that loses a couple of pre-merge challenges early on, then I could see her tribe playing it safe and voting her out. I hope that doesn’t happen. I really want Kimmi to enter Survivor Second Chance much more game-focused and make a really deep run, and part of me thinks that is entirely possible. But another part of me has doubts. Inside Survivor says that Kimmi will be much more switched on this time around, but her tribe will get rid of her as an “easy vote” pre-merge (I do however reserve the right to be embarrassingly wrong!).

Thanks for reading our Survivor Second Chance Retrospective for Kimmi Kappenberg.

What do you think Kimmi’s chances are next season? Leave your comments below.