In an exit interview with She Knows, Kelly Wiglesworth said that she and Tasha had a sense that something wasn’t quite right heading into tribal council. Wiglesworth even stated that at that tribal council, Tasha voiced her concerns to Jeff Probst: “Jeff, I’ve got a weird feeling. Something’s happening.”

Why did Wiglesworth and Tasha have this weird feeling? And how come they didn’t do anything to reverse their fortune?

In an interview with Josh Wigler for Parade magazine, Wiglesworth revealed that it was Jeremy that tipped her and Tasha off that everything wasn’t quite as it seemed. She said that “Jeremy was acting strange,” and it caused her and Tasha to have second thoughts about the vote. “He wouldn’t look she or I in the eye. He would barely talk to us. That was very telling. We couldn’t figure out what was going on, but we knew something was going on.” 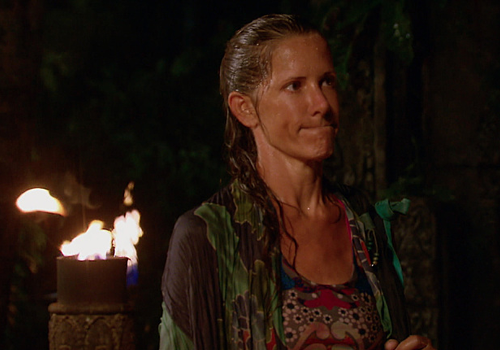 So did Wiglesworth have a counter plan? In the same interview with Wigler, she revealed that she and Tasha did consider changing their votes: “Tasha had turned to me and said, ‘Let’s not split the votes. You, me and Kimmi will vote for Wentworth.’” But because they didn’t have a chance to communicate the new plan to Kimmi, they had no real choice but to stick with the original vote.

There was another reason why Wiglesworth still felt relatively safe, and that is because of Stephen Fishbach – the man who actually plotted her downfall. In her exit interview with She Knows, Wiglesworth revealed that she was shocked by how much Stephen had lobbied for her vote-off, as at the time she believed she was in a sub-alliance with him, Joe, Kimmi, and Keith.

Ironically, the most interesting thing about Wiglesworth is her lackluster edit. There has been lots of debate over why the original Survivor: Borneo runner-up received such a poor edit, and everyone has a theory.

In an interview with ET Canada, former winner, and three-time Survivor player Parvati Shallow said that she believed Wiglesworth received such a bad edit because she wasn’t cooperative with Probst and the producers. She wouldn’t play up to the Second Chance theme in the way they wanted her to; refusing to compare her experiences in Borneo to Cambodia. “I don’t live in the past; I live in the present.” Shallow says that the producers picked Wiglesworth to be the poster girl for Survivor: Second Chance and she wouldn’t play the character they wanted – so she was punished in the edit.

Is that true? Partly. It has been documented that Wiglesworth wasn’t providing Probst with interesting sound-bites during the first three days of the season. Various members of the press who were on location and present at the first tribal council spoke of how Probst laid into Wiglesworth for giving weak, evasive answers.

So did production punish her because she didn’t fit the role they had designed for her?

What is important to know, is that CBS and SEG (Survivor Entertainment Group) are two very different entities. And the story of Kelly Wiglesworth plays directly into the relationship between these two entities.

CBS, of course, is the network. They are the channel that broadcast Survivor and provide the resources for the show to be produced and televised. SEG is the production company that actually creates, films, produces and edits the show ready for broadcast.

Regarding the relationship between the two, CBS is like PR and marketing, relaxing in their comfy offices. SEG are like the builders and grafters, out on the front-lines making the show. CBS care about ratings and flashiness. SEG care about Survivor and story-telling.

CBS are not directly hands on because they don’t fully understand the show (I mean, just look at how often they make mistakes in their Survivor promotional material!). What CBS care about is milking Survivor for all it is worth. It’s a department of people that have to report numbers to CBS president Les Moonves, and the decisions regarding Survivor will be made with those numbers in mind. That’s just how television works.

All creative decisions, including casting, have to be approved by CBS. Survivor executive producers, along with casting director Lynne Spillman, will come up with the actual theme or proposal and go back to CBS for approval.

When SEG first pitched the fan-vote twist, it is said that CBS had some very clear ideas about the cast. Apparently, CBS lobbied hard for Kelly Wiglesworth’s inclusion, and it was CBS, not SEG, that wanted to market the Second Chance theme around the original runner-up. It makes sense from a PR and marketing stand-point.

However, as those journalists on location reported, Wiglesworth just wasn’t providing the kind of material that you could market a show around. It was frustrating for Probst and the production crew because of the orders they felt tied to from CBS.

So we come back to the question, did production punish Wiglesworth because she didn’t fit the role that CBS had designed for her? Possibly. But it could also have been a message from SEG to CBS – one that says, your ideas of what makes good television are out of touch, just look at your chosen poster girl. Wiglesworth’s purple edit could have been SEG telling CBS: let us tell the story the way we want to tell it. 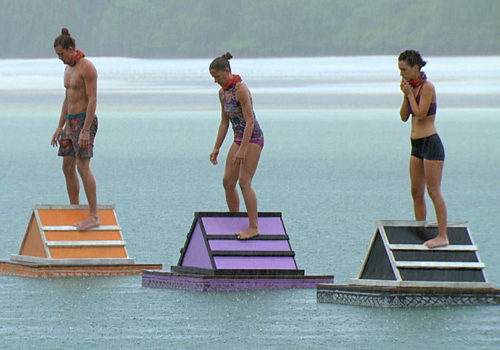 The Episode 9 immunity challenge was “Bermuda Triangles”, a variation of a challenge that first appeared in Survivor: Marquesas and has since been used in numerous seasons. The challenge involves contestants standing on slanted slats on a podium over the water. At regular intervals, they have to move up to a higher set of slats, making it harder to balance.

In the edited episode, we only saw the contestants balancing on the middle slats and then after an interval moving up to the top slat. However, Inside Survivor can confirm that the players did start the challenge on the bottom slats and stayed in that position for ten minutes. Which begs the question, what would have happened if somebody fell off in those first ten minutes? They would have surely lost out on the opportunity to swim for the game advantage which wasn’t revealed until round two.

Thanks to commenter Julio for bringing forward this information which I have been able to verify with sources. At the challenge, when the three remaining castaways went on one foot, and Wiglesworth was unable to make the transition, instead of calling her out, Jeff mistakenly called Abi out, who then fell in the water. Because of that mistake, Joe had to jump too, so that the two of them could start over. 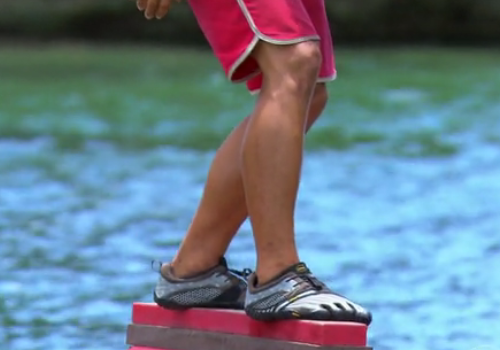 Also of note, the contestants were not allowed to wear minimalist shoes (also known as toe-shoes). If you remember, Woo wore those kinds of shoes in this exact challenge in Survivor: Cagayan and won.

5 responses to “Survivor: Cambodia Episode 9 – What You Didn’t See”

Survivor SA: Return of the Outcasts Episode 5 Recap - Not Afraid of Anything