Even with a special 90-minute premiere episode of Survivor: Cambodia – Second Chance, there was still countless footage that hit the cutting room floor. With three entire days condensed into what was essentially one hour of television, there was obviously going to be lots of interesting and important things we didn’t see. But fear not. Here at Inside Survivor we have gathered a selection of behind the scenes information relating to Episode 1. Some of this information comes from members of the press that were on location, such as Dalton Ross and Gordon Holmes, while some of it was gleaned from several Redmond sources.

What the hell was going on in this picture? 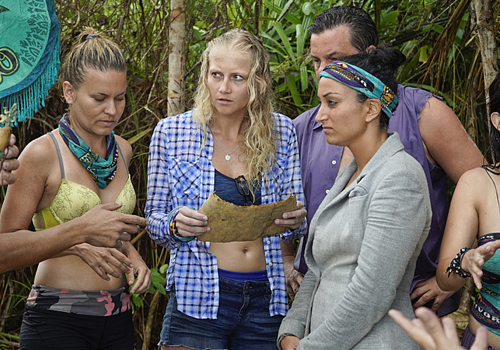 Many people saw this Survivor Second Chance photo released by CBS press for the premiere and wondered why Kelley and Shirin were making such fierce faces. We got some clarification from Shirin’s Twitter, but here’s the full story with a little bonus. Confirmed by several different sources.

Abi was chosen to get treemail and read it for the upcoming immunity challenge. The font used for treemails this season looks to be styled after the alphabet of the Cambodian language, Khmer, and is difficult to read. Abi struggled to figure out some of the words, resulting in Terry saying, “Can somebody who speaks English read it,” assuming she was struggling because she speaks English with an accent. The Brazilian firecracker snapped at Terry, “Fine, you read it then!” And threw the treemail at him. Other tribemates snapped back at Terry saying the font made it difficult to read. This is when Shirin and Kelley glared at Terry. Somebody picked the treemail up off the floor and gave it back to Abi to continue reading it. As she continued on, Terry interrupted again, insisting somebody else with better English read it. Abi again threw the treemail at him. People protested, and more glaring occurred, but this time, Terry kept it and read. “Seventy-five years…um…” He not only got the first word incorrect, he couldn’t read the third one.

Want to see the treemail for yourself and give it a go? 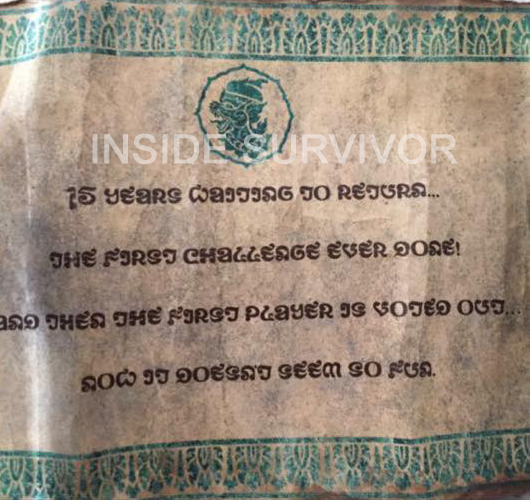 There have been many castaways over the years that have tried to get one over on production. Whether that be sneaking into production tents to steal food or smuggling matches up their bum. This season Peih-Gee Law attempted to smuggle flint, fishing wire and hooks onto the island. All disguised as jewelry. Afterall, Peih-Gee is a jewelry designer by trade. She was actually successful in smuggling these items on to the island. However, she announced this to her fellow tribemates within minutes of hitting the beach and production quickly confisicated it. 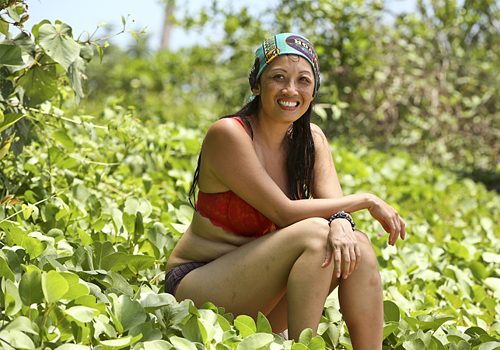 Peih-Gee wasn’t the only smuggler on Koh Rong island. Monica smuggled sleeping pills and other stuff onto the Bayon beach.

Note to future contestants – if you are going to smuggle contraband onto Survivor, don’t tell everybody about it – especially not in front of cameras.

Speaking of sneaky, sneaky – Kelley Wentworth’s idol clue discovery actually happened on Day 1 and not Day 3 like the episode claimed. And on the topic of idols, Stephen was in fact tasked with gathering firewood while he was shown searching for the idol – he didn’t just wander off unannounced like the episode purported. Sticking with Stephen for a second, he was apparently caught taking an “aqua-dump” during a helicopter shot. 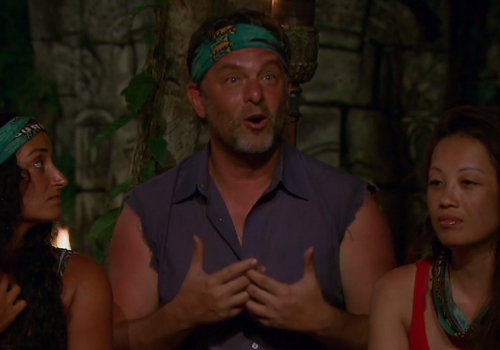 It has often been stated that Tribal Council sessions can last for hours. In a normal episode we are lucky if we see 10 minutes worth of tribal footage. This first Ta Keo tribal was apparently jam packed with juicy goodness that we didn’t get to see. Including host Jeff Probst laying into Kelly Wiglesworth for giving poor, evasive answers any time he asked her about her last time playing. This had supposedly been building over the first three days and finally Probst snapped at tribal and came at Wiglesworth hard. Terry was also on the receiving end of Probst’s wrath for giving equally poor, generic answers.

But tribal wasn’t all anger. It also had moments of levity. Shirin broke into an uncontrollable laughing fit while Spencer was trying to answer a question. Probst had to put the entire session on hold and wait for Shirin to regain her composure before continuing. When Shirin eventually calmed down she said that she agreed with what Spencer was saying – to which Probst responded “That was the biggest waste of time ever.”

Probst also called “bullshit” on the castaways when each one of them raised their hand after he asked who felt in danger of being voted out.

At one point Woo mentioned that there were two voting options – “an easy one or a more strategic one” – but he didn’t know which one he was meant to vote for. The easy option was Abi-Maria, and the strategic choice was Shirin.

The biggest bombshell that was left out of the episode involved Jeff Varner. Before the vote, Varner stopped the proceedings to ask Peih-Gee and Wentworth if they were still voting the way they had told him earlier in the day. Wentworth confirmed with a simple “Yes”. This unsettled Terry, who asked “Jeff, what does that mean?” – this was the lead-in to the part we saw in the episode where Varner said “This is my second chance. I don’t wanna screw it up.”

12 responses to “Survivor: Cambodia Episode 1 – What You Didn’t See”