In Survivor: All-Stars back in 2004, former winner Jenna Morasca decided to remove herself from the game due a family matter. Her mother had been battling cancer for over 12 years and was in ill health when Jenna decided to take part in the first ever all returnee season. But fearing the worst, Jenna chose to exit the game on Day 9 to be by her mother’s side. Her mother passed away just eight days after Jenna returned home. Jenna’s decision to leave the game proved one of great foresight, as she was able to spend the final few days with her mother before her tragic passing.

As much as people like to boil Survivor down to mere numbers and strategy, it is impossible to ignore the emotional effects of the game. “Family” is a significant part of the emotional experience. The concept of “family” ties into almost every aspect of Survivor: whether a person is missing their family, playing for their family, or in the case of Blood vs. Water seasons, playing with their family. It is the reason why Survivor continues to do loved-ones visits each season because of the raw emotion it brings out of the players.

This season alone has had near record mentions of “family.” The season opened with Kelly Wiglesworth talking about being a new mother. Joe wants to make it to the loved-ones visit to see his dad. Kelley Wentworth felt her game last time was hindered by her dad. Jeremy and Savage cried about missing their wives. And last week, Woo teared up when talking about his mother and her health problems. Second Chance is an emotionally charged season, and family matters are driving many of these players.

Home Is Where The Heart Is 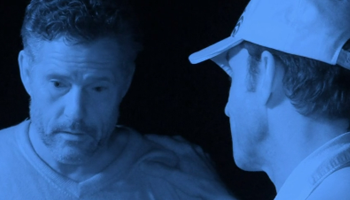 It has been over a decade since Jenna Morasca prematurely left All-Stars to be with her family. A player hasn’t exited that way since. Until this week, when Terry Deitz left the game due to his teenage son Danny suffering heart complications. There was no second guessing from Terry, as soon as Jeff Probst informed him of the situation, he packed his bag, said his goodbyes and hopped on a boat.

Whether you are a fan of Terry or not, you couldn’t help but feel for him at that moment. It is devastating to see anyone leave the game in that manner.

Credit to the producers and editors for how they handled this moment too. It was an emotional, scary situation that could have easily been over-dramatised and milked for television purposes. Instead, it just happened. It demonstrated just how quickly things can change and how important the bigger picture is. That had much more of an effect than piling on the over-the-top incidental music and lingering reaction shots.

Terry wasn’t in control of the game; in fact, had his tribe lost immunity over the past couple of weeks he was very likely the next to go. But as this episode made very clear, family is bigger than the game of Survivor. Terry put his family first and got to be there for his son in his time of need. Danny has since undergone heart transplant surgery and is at home recovering.

Terry’s exit sent shockwaves throughout the Second Chance cast and put family at the forefront of everyone’s minds. Combined with the second tribe swap of the season, it served as a wake-up call to many. Including Ciera; who of course played with her mother back in Blood vs. Water.

“I want to go for it full on, so I can go home to my family and say hey, I gave it my all.” This thought was what was driving Ciera throughout the episode, from the moment she heard her name brought up as the “decoy boot” by Savage.

Ciera is very familiar with the decoy boot strategy, as she was also the decoy in her first season. She didn’t appreciate it then, and she didn’t enjoy it this time around either. We’ve all been anxiously waiting for “schemer” Ciera to emerge. She was part of the reason Blood vs. Water was such an entertaining season because anytime she felt in danger, she would snap into action, and her plotting always led to exciting results.

She indeed snapped into action this week with a feisty determination. She turned the vote around, assuring not only that her target went home but that her name didn’t come up in the votes at all; this is the Ciera we have been longing to see. With her family in her heart and mind, it looks like she is ready to step it up a gear.

Another spurred on and extra emotional player this episode was Stephen Fishbach. Whether this was a direct result of Terry’s exit is hard to say, but at least subconsciously that moment must have added extra gravitas to each player’s second chance. Nobody wanted to see their opportunity pass them by again.

Fishbach seemed to be having an out-of-body experience; shocked and confused by his emotional breakdown. You see, Fishbach doesn’t care about whether he throws like a blind chimpanzee or runs like a grandma in the Black Friday sales. Challenges aren’t his bag, and he knows it. What he does care about is the game, and winning the game. He came so close in Tocantins but his inability to remove “golden boy” J.T was his downfall, and that is something that has plagued his mind ever since.

His struggles to get his fellow Bayon alliance members on his wavelength were palpable. The Bayon alliance itself has become somewhat of a de facto family. It has been spoken about in those terms by several of its members. It’s one of the reasons Monica was targetted last week because the tribe perceived her as turning against the family. When Fishbach saw Joe doing the same thing this week, he became dead-set on voting him out. But that’s the problem with families; they don’t always see eye to eye.

Kass has spent the first half of the season portraying herself as the self-titled “Calm Kass”. Who is Calm Kass? Well, Calm Kass is an empathetic, friendship-bracelet-making, Dale Carnegie reading, loving mother, and adoring wife. She is the woman that cried when Terry had to leave the game, understanding as a parent how difficult that must have been. That’s Calm Kass.

But how much of Calm Kass is an act? While I certainly don’t believe that Kass faked her emotional reaction to Terry’s exit, there is clearly a concerted effort by Kass to appear friendlier this season. As she said herself, she needed to change people’s perception. Chaos Kass still lurks beneath and has been relishing the chance to reappear and stir up some trouble.

Kass and Spencer are one of the Survivor’s best modern day pairings. It’s like a bizarre version of Colby and Jerri. Or to keep running with the family theme, Kass is like a twisted mom that enjoys psychologically torturing her son (Spencer), like a Survivor Babadook situation. The fact that Kass and Spencer decided to work together for this week’s vote despite their differences just made their relationship even more twisted and entertaining.

By turning her back on Savage, going with Ciera’s vote-out-Woo plan, and essentially sparing Spencer, Chaos Kass is back in the strangest of ways.

An emotional opening led to an exciting, high-gear performance by a cast that is truly cherishing their second chance. The new tribe shuffle created some interesting dynamics and made for a schemey, twisty episode that ended with a real blindside at tribal council. Both challenges provided entertainment: whether you wanted to ogle at Joe’s oiled up body or Abi’s Brazilian booty or whether you wanted to stare deep into Jeremy’s eyes as he snuck a bite of half-eaten balut. The return of the pre-merge gross food challenge was certainly a highlight.

It was also great to see players trying, and some succeeding, to take charge of their own game – namely Ciera and Stephen. And to leave it on a hopeful note, the episode ended with footage of Terry at home with his son Danny, happy and regaining his health. A top notch episode of Survivor that hopefully sets us on an exciting path as we head into the merge.